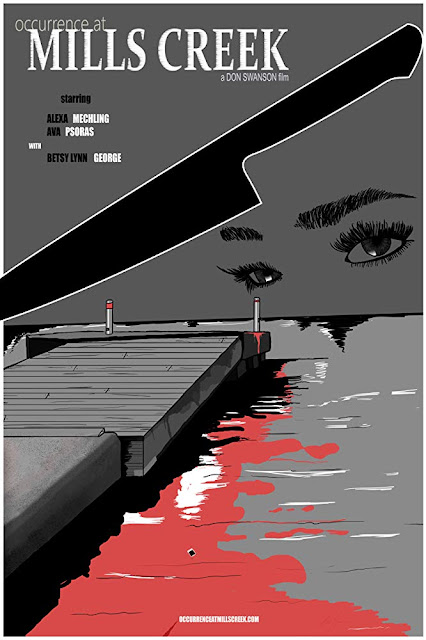 Occurrence at Mills Creek is a short twenty minute horror that was written and directed by Don Swanson (A Wish for Giants, What Was Lost). While this is set out to be a short film it is actually stated to be most of the opening act of a feature film with the same name which is due for release in 2020. Can the opening act of a larger movie really be treated on its own terms as a short though?

While this short plays around with the sense of time, with scenes shown out of chronological order I think the general gist was this: After the death of their mother, siblings Clara (Ava Psoras), and her younger 15 year old sister Cassandra (Alexa Mechling - A Wish for Giants) are all each other has. One day a tragic occurrence at Mills Creek changes even that. That is what I got from this, though the actual synopsis suggests something more paranormal which I didn't necessarily see.

The biggest question I had is if this would be strong enough to stand on its own. The quick answer would be kind of, but I will explain. I didn't have any problem with the actual film, but it never felt completely like a whole tale. There is no traditional act structure with the whole twenty minutes seeming almost like a stream of consciousness from the protagonist. That wasn't so much a problem though as I did enjoy how this goes backwards and forwards in time, with each scene feeling appropriate, save for an extended credit sequence that played out over the two sisters walking through a graveyard. It links the different time periods via editing together similar actions, such as Cassandra laying the floor and as she turns round it is suddenly a different location with her in the same position. Stuff like that I quite liked.

Of course it isn't as simple as going backwards and forwards in time as this also comes across as some sort of extended dream sequence. In what I assume to be the present the supposedly dead Cassandra crawls around trying to tell her sister she is still alive. At another point, a funeral Clara is at suddenly plunges into a dark nightmare sequence. This all feels quite low budget but the longer it went on the more I felt like I was getting into it. As for the acting, it was passable, but for me personally I did struggle to hear some of the more quietly spoken lines.

With Occurrence at Mills Creek you have something that works more as a taster than as a stand alone short. The plot doesn't get resolved but it does set up enough questions to make you wonder just what exactly is going on. With a nice variety of locations, and some nice enough editing and camera work this was decent enough, it would work be interesting to see it within the context of a larger story.