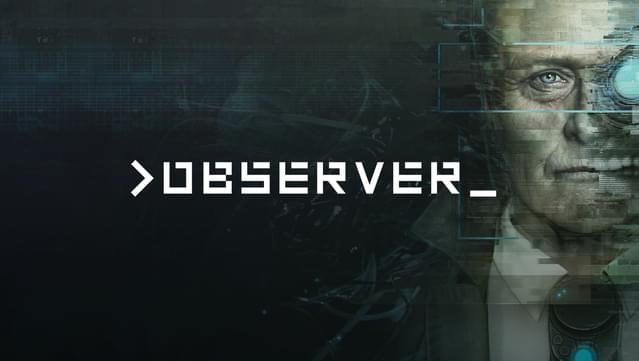 Observer is a game I have wanted to play for years, and in fact I have owned it for years. However every single time I have gone to play it something came up that prevented me from doing so, really has been strange the amount of times that has happened. Anyway, with a week off work I decided to finally plug myself into this cyberpunk horror.

The game takes place in 2084 in a dystopian future in which a global digital plague named the nanophage has killed thousands upon thousands of  augmented people. This resulted in a global conflict between the superpowers of the East and West which wiped them out. In Poland a mega corporation called Chiron took over the running of the country. You play as Daniel Lazarski (voiced by Rutger Hauer), an Observer based in Kraków. Observers are a special branch of the police force who have the ability to hack into peoples brain implants for interrogation purposes. One night you receive an urgent call from your estranged son Adam asking for help. You track him to a run-down apartment building in the Class-C part of the city (the poorest area). Arriving in his flat you discover a headless corpse, then before you are able to request assistance the whole apartment building is put into lockdown, with communication to the outside world cut off. Trapped inside with a killer on the loose you must investigate to discover exactly what has occured. 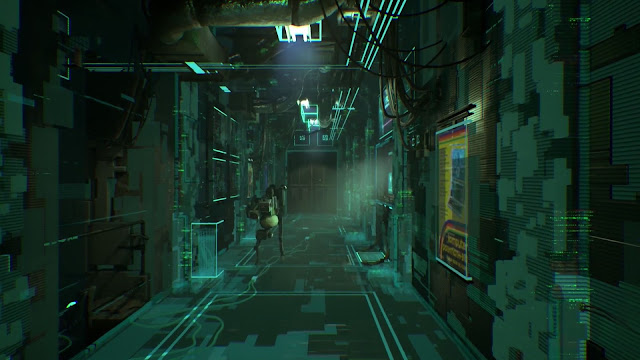 Some forms of media I find really affect me, and usually it is when situations match up with my experiences in real life. Being an introvert, and with my previously mentioned week off work I have become a bit isolated and kind of a shut-in. So to then play a paranoid psychological horror that takes place in a building under lockdown I become to feel like I was one of the tenants locked in their flats, and that any moment Daniel Lazarski was going to come knocking at my door. It also doesn't help that my first name is the same as his, on more than one occasion forgetting this I was perturbed by a character speaking to me by name! Observer is a hallucinogenic, technophobe first person horror game in which nothing is ever as it really seems.This bears a lot of similarities with other games of its type. It covers such topics as the underwater terror that was Soma did, but in a setting that felt more like Deus-Ex. There is no combat, I would use the term 'walking simulator' but that always sounds like an insult. On occasion there are stealth sections that pop-up but these are few and far between. For the most part you are walking around the claustrophobic maze like corridors of the apartment building, going door to door, speaking to the apartments residents through distorted, hazy video projectors.

Borrowing elements from Condemned: Criminal Origins the main aim of the game is to follow the clues to locate a killer. Like that game that leads to plenty of crime scene investigations that require you to use a variety of tools. At any point you can access augmented vision. Electromagnetic Vision scans for electronic devices, and Bio Vision scans for biological evidence. The biggest tool by far is the ability to hack into peoples minds, something which puts the unsettling atmosphere into overdrive with a series of what can only be described as nightmare sequences taking place in the dying or dead mind of one of the victims. These sequences are where the game really goes crazy, referencing yet another horror game these put the trippy world morphing parts of  Layers of Fear to shame. The world shifts and morphs into different environments, rooms pulsate, and the unification of biological and technological is put out in full force, narrow crawl spaces jammed with wires contrast with open hallways full of writhing fleshy tendrils giving a feeling of David Cronenberg's Videodrome. These sequences have the most puzzle elements as well. such as a room full of doorways that require a particular sequence to be able to exit, or a huge field of computer tape that must be traversed as huge drones with spotlights fly overhead. These were all crazy and distinct, but I did feel they all went on far too long for my liking, and was the part of the game where I would frequently get stuck for large chunks of time, unable to work out how to proceed, which occasionally led to frustration. 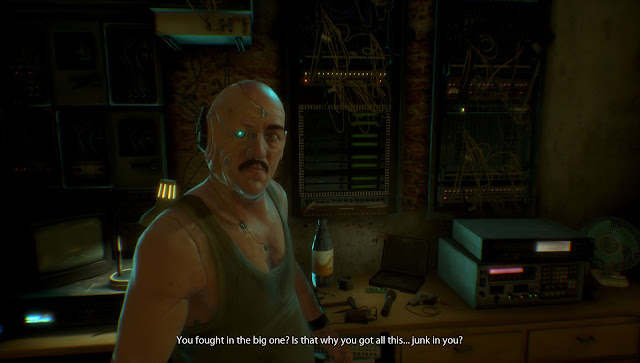 The plot of the game was interesting, the ideas put forward of augmentations making people less human, and the hunt for the killer were mostly explored well. Past the halfway mark though the game did become less interesting to me. The more you get into the story the more the fantasy world of the hacked bleeds into reality, with it becoming more and more dreamlike, leading you to question exactly what is real and what is a product of your technological side. This was all well and good but I did feel some of the atmosphere of the apartment block was reduced when nothing seems real anymore. I also didn't feel Daniel was that interesting a protagonist, he had a level way of speaking that didn't really make him stand out to me. Without going into spoilers I was disappointed with the endings here, it turns into a binary choice that results in a bad outcome either way.

I loved the atmosphere and the attention to detail here, it all looks and sounds fantastic with the feeling of horror always bubbling underneath. Those dream sequences did often run on for too long, and the story didn't really go in the direction I had hoped for. Still, this is a vastly underrated gem, for any fan of psychological horror this is something that you really should play.