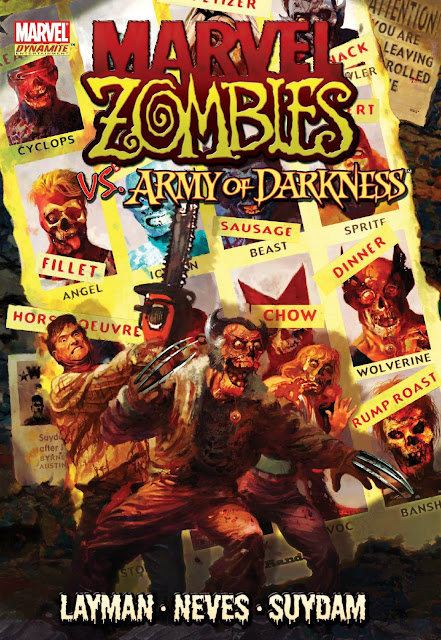 Many years ago I read the first couple of Marvel Zombies graphic novels but never got around to reading the rest, as they were quite expensive at the time. Due to this I stopped after the second one. After seeing a zombie Iron Man appear in a hallucination in Spider-Man: Far From Home I came to be thinking of this series once again, and was pleased to see that the books were all pretty cheap now, and that there were a load more released since I last checked out the titles. Marvel Zombies is a standalone series that takes place in a reality where a zombie plague has decimated Earth. I've owned Marvel Zombies vs. Army of Darkness since before my blog was even a glint in my eye, so have revisited as part of my reading of the Zombies series. Interestingly within the context of the series it is canon as it is linked up to take place around the same time that Dead Days (the prequel to Marvel Zombies) did. I shall be reviewing Dead Days later as three of the four stories in the collection take place after this novel.

Ash Williams (from The Evil Dead) falls out of a portal and lands in a world that looks very similar to his own, similar that is apart from the fact in this world super heroes exist. Unfortunately for Ash his arrival is not long before a catastrophic zombie plague is unleashed, super heroes being super heroes try to fight this outbreak but soon they are overwhelmed and transformed into flesh hungry beasts who in record time decimate the world thanks to their super powers. It doesn't help that ths virus only affects people with powers. Teaming up with surviving super heroes Ash goes on a desperate quest to locate the Necronomicon which he believes is the cause of all the madness...

The idea of zombies in the world of Marvel is one which has never got boring to me over the years. Weirdly Ash is a perfect fit in this world, coming across as an oddball but losing none of his extreme confidence. A lot of the humour comes from his interactions in this place, not knowing who anyone is. For instance when seeing Daredevil fighting Thunderball he assumes the guy dressed like a demon is the bad one so helps defeat him! His lack of knowledge of who anyone is leads to plenty of fun moments, such as the various insults he throws at Doctor Doom, and how he refuses to become The Punisher's sidekick to hilarious effect. It is so much fun seeing all the various heroes and villains of the Marvel world turned into corpses, more so now that I have seen ten years of Marvel films and actually know who a lot of these characters are, when back when I first read this I only knew the main ones. A book in which a zombified Howard the Duck appears can never be something bad!

Unlike the main titles in the series this obviously focuses on Ash. Originally this was a five issue run with a lot happening. The story itself is fitting for Ash and leads to a great resolution which is as silly as you would expect. His journey sees him for the most part not really getting involved in the main story, his interactions with the undead are usually one on one with the main zombies getting fleeting appearances. More impressive to me was just how this works with Dead Days. For instance in that it started with an infected Spider-Man returning to his home. In this you actually see how he got infected, matching up with what he said in that other comic about how it happened. I loved how care had been made to have this fit in coherently.

I loved this graphic novel at the time and I still do. It carries the persona of Ash perfectly, and manages to naturally blend the humour effortlessly in. This is all helped by some great artwork and colouring. As a hardback this feels like quality. Marvel Zombies is a great idea in itself, adding the Evil Dead world into the mix was genius.