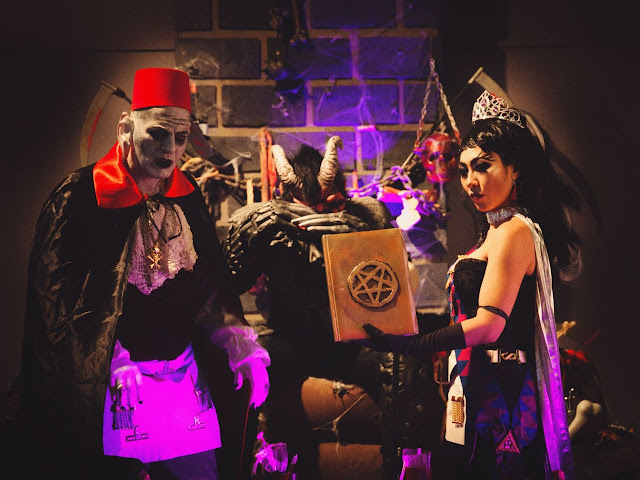 Horror House is a web based horror show that features a variety of short Australian horror films, and which is hosted by Count Funghoula (David Black) and Mistress Boobiyana (Tritia Devisha). The first season is made up of six episodes, each roughly 25 minutes long.

So to start with is the hosted format. I found the wraparound sections featuring the two hosts to be a bit random. The humour is often crude, and there aren't really any plotlines, but the format is helped a lot by canned laughter and other fake audience effects that add a lot of charm. While it was all a bit nonsensical the makeup of the two was good, and I admit I did like all the random violence Boobiyana causes to Funghoula. Plus I found all the bad stuff that happens to Funghoula to be consistently funny. I felt that it might have worked better had the hosts introduced each short, or commented on them afterwards, as these shorts felt unconnected.

So each of the six episodes mostly has three shorts and one music video. The music videos are all by Darkness Visible (that Black is a member of) and is all horror tinged music. Some, like 'Darkness Visible' in episode one, and 'Eat Me' in episode five tell little stories in their videos. It was nice that the final episode featured 'Inquisition' which it turns out is the music used for the Horror House theme during the wonderfully animated intro credits. I've seen a few Australian short horrors over the years and so was interested to see what this show would come up with.

The shorts in episode one start with Kali Geisha Erotica Grotesque which does what it says on the tin. This was a surreal one set in a white location featuring a geisha (played by Devisha) getting revenge on men who tried to take advantage of her.
Next was The Tale of Betty Boots which was a twist on Little Red Riding Hood. It had nice makeup but felt a little too sterile.
Waterbourne was the final short and was an excellent zombie film that even featured an undead kangaroo! Before the music video for this episode there is a brief little interlude named Dark Metamorphosis that features Black as a devil.
Episode two starts with Gruesome Discoveries that was a blend of found footage and traditional horror. It was about two people (one played by Black, who also wrote, directed and produced it) returning home to find all their friends dead.
Next was The Miner which was played seriously. It was about a ghostly miner returning to cause disaster (I think).
The final short here was Dark Night of the Zomboogies. This was a fun enough film but it just seemed to end quite abruptly without really telling a story. 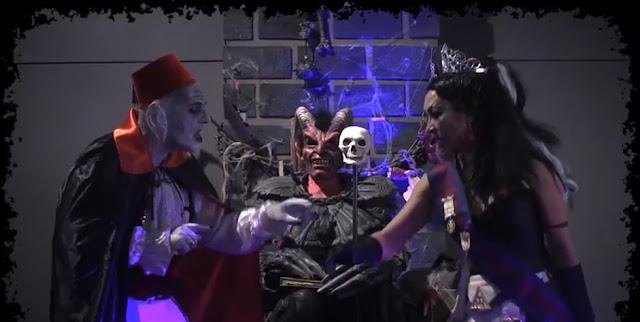 The third episode I think may have been my favourite of the lot. It starts off with Ted Bundy Had a Son Pt.2 which seemed almost to be a sequel to Gruesome Discoveries. A violent detective interviews a suspect of a mass killing. I enjoyed the character of the detective quite a lot.
Baby Did A Bat Bat Thing was, I think my favourite of all the shorts in the first season of Horror House. This is a crazy film that featured stop motion bat monsters during some sort of apocalypse. I loved some of the editing and flow here, such as a news report playing on a miniature TV laying on the ground. I also thought the bats crawling out of people's faces looked so cool in an early Peter Jackson films kind of way.
Next was Injurious that was an interesting film about a man and his hostage, it was something a little different.
The final episode in the traditional format for Horror House starts with the amusing Derek McDermotts Outback Monster Adventures that is set out like a National Geographic TV show with the manic, enthusiastic presenter investigating a zombie sighting at a remote home.
Midnight was next and was based on a two sentence story, it was ok but a bit confusing.
Lastly was Pieces of 8: Chapter 1 which had a woman trapped in a recurring nightmare, and which had some good ideas, even if this and Midnight kind of had the same idea.

For episode five the format was changed slightly, instead of showing off different peoples short films this instead contained three different shorts of Black, each one featuring him and Devisha prominently. In Life Love and Death a recently deceased man haunts a prostitute. In The Fall of Precinct 13 two cops in an alien invaded world try to think of a way to abandon their post. Finally in Sex Robot a man encounters a malfunctioning sex robot who follows orders a little too literally. These were all fine enough but it did make this episode of Horror House feel more like a sketch show due to mainly just the two same actors in each of the films.
The final episode changes up the format even more. Here the hosted part is in greater abundance and there is just the one proper short film. Dracenstein is a creepily animated short set in Tasmania that blends the stories of Dracula and Frankenstein together. This is follows by Parental Duties BTS, which is a behind the scenes montage for a film I had not heard of.

The humour might not appeal to me in the hosted segments, but a lot of energy were put into these scenes. As for the shorts they were a mixed bag, but with anthologies there is always something that is worth watching, and over the season of this there were certainly some gems hidden away. Horror House is free to watch on YouTube, and it will be getting a run on the Monster Channel as well, so check it out for yourself.

Posted by Daniel Simmonds at 07:22