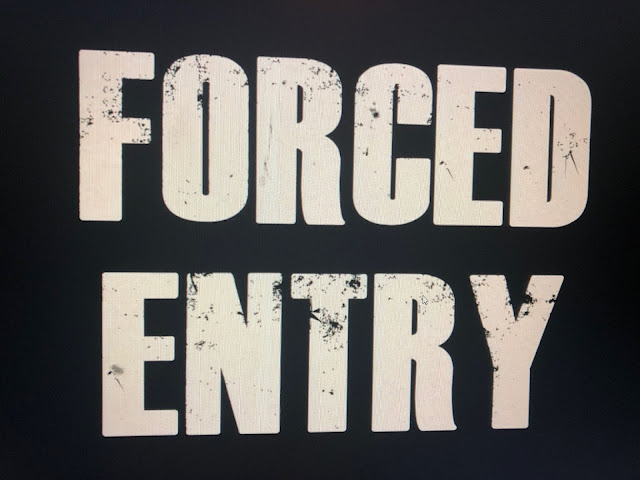 Forced Entry is a 24 minute horror that was directed by Texan based filmmakers K.M. Jamison and James Bett Jr. (who also co-stars). Now the subject matter of random brutal murder isn't a favourite of mine, but compared to similar films within the subgenre this short sits in, such as the unpleasant Headless this comes out a lot better. This too is a nasty film that left me feeling unclean, but I also appreciated how this was created.

Two masked psychopaths; Arthur (Tom Lodewyck) and Donovan (Bett Jr.) spend their days randomly targeting young women, capturing, torturing, and then killing them. This short almost feels like 'a day in the life' of, though due to the way it is edited it could also be seen as a collection of even shorter stories within the short.

So, Forced Entry is set out like an exploitation film from the eighties, so this includes lots of violence and murder squeezed into its run time. I liked the editing here, and the way it is set out in general. For example, the intro credits come three minutes in, after a prologue that sets the tone for what is going to transpire. Namely lots of innocent female victims being terrorised, lots of blood, and some nudity. Going back to Headless, that loved showing its violence in close up detail. With this, while violence is shown on screen (such as knife stabs and cuts), it is also implied quite a bit, but remains just as powerful. My favourite example of this was a shot showing a fleeing victim coming face to face with one of the killers, then it cuts to the victims bloodied corpse laying on the ground. I really liked transitions such as these. The fact that this is a homage to old films also helps scene changes with it being made to look like parts of the film are missing, or having the film cut to static.

Sticking to its roots the victims are nearly all nameless and have little to them. They are lambs for the slaughter to the two psychos who are the focal point of this. Arthur is quite chatty and came across like a cross between Heath Ledger's Joker, and Malcolm McDowell's portrayal of Alex in the classic A Clockwork Orange. Arthur is the larger of the duo, he does speak as well, possibly the dynamic of the two would have been better if he had been a silent character, then they would have represented two different types of home invasion antagonist.

While I didn't like the subject matter covered I loved how this was all put together. There were so many little elements I enjoyed, from the way the camera lovingly pans up and down the corpses revelling in the blood and body trauma, to the jump cuts, the editing, and end credit footage of serial killer testimonies. This was an unpleasant film whose plot felt aimless, and it certainly seems misogynistic, but then it is an ode to exploitation films and so it needed those elements. To say I enjoyed this short wouldn't be completely true, yet Forced Entry was a film I'm glad I watched.