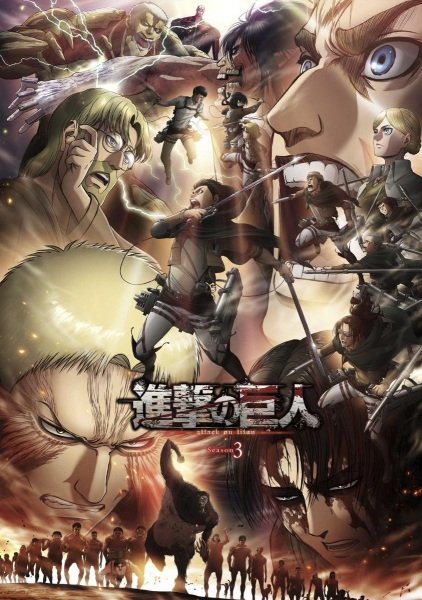 I've had this review of the third season of Attack on Titan written for a long time, just never seemed the right time to stick it up, but here it is today. The second season of Attack on Titan was just twelve episodes in length, but as I said then it really was quality over quantity with some of the finest story moments I have experienced in that sort of media. With this new season they did a The Walking Dead and split the season in half, the first twelve episodes released in 2018, with the final ten coming out this year. I really should have made notes or something, but alas I didn't, and so my memories of that first half are a bit sketchy. I will try and keep spoilers from previous seasons to a minimum.

A brief summary is that Attack on Titan takes place in a world where the surviving humans live inside huge stone walls that were put there to protect them against monstrous beings known as 'Titans'. In season 2 it was revealed that there was a plot by unknown enemy forces from outside the walls to kill all the humans within. Season 3 starts off insular, the scouts (soldiers trained to battle titans) realise that for reasons unknown the ruling government do not have the best interests of the people in mind, which leads to them rising up to overthrow the government. The second half of the season sees the scouts head out to retake 'Wall Maria' (the first of the three walls that was destroyed at the very start of the first season), as well as to finally find out the secret of what is in Eren's father's basement, which has been a huge plot point forever (Eren being the main character). 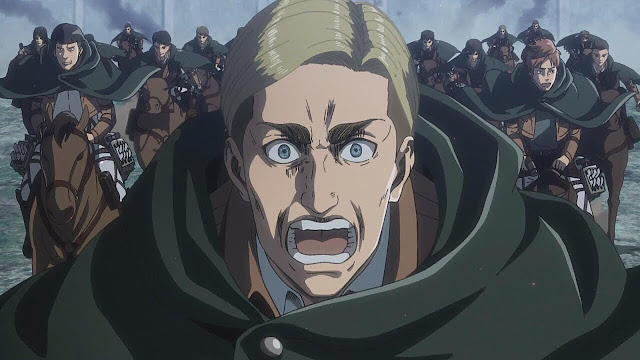 The entirety of season 2 took place over just the course of a couple of days. With this new season it seems to be a few months at least. This is very much a show split neatly into two halves. The first twelve episodes are almost titan free, yet this part shows that even without giant monsters the world is a violent place, specifically with an armed group led by Levi's former mentor (Levi being the leader of the scouts). It all gets quite political yet despite this manages to introduce the largest titan yet to grace the show, one so big that it can't support its own weight and so crawls along on its belly.

It is the second half of the show that is the more dramatic. With season 1 you had the journey outside the wall that turned into a running battle against the female titan. This time around it is a huge battle that occurs around 'Wall Maria' that includes on the enemy side the 'Beast Titan', 'Colossal Titan', and the 'Armoured Titan'. This starts with The Town Where Everything Began, and ends six episodes later with Midnight Sun. This was a thrilling set of episodes that had my eyes glued to the screen. This had so many satisfying moments, whilst at the same time showing the awful sacrifices of life that are required for wars to be won. One episode is dedicated entirely to a discussion over just who deserves to live, and who to die, suspenseful and sad at the same time. Then of course there is the eventual reveal of just what is in that basement (The Basement). Of course I won't spoil that, but needless to say a lot of the mysteries of the world of Attack on Titan are now revealed, the secret being explained over the course of around three episodes. It all finishes with the mellow To the Other Side of the Wall which was a low-key way to end the series, but leaves it at a great point for season 4 to continue from. 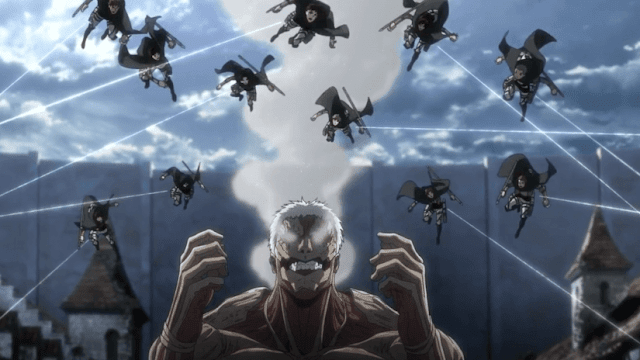 This was again a great series, and to my mind better than the first season. For me though it didn't match the highs of that perfect second season. There were huge revelations here, but nothing to compare to that absolute mindf*ck that was episode six of season 2; Senshi. And this was more action and story based this time around. My favourite episode of the whole run has been season 2, episode four Heishi which was pure horror. Now with the Titan threat revealed to be more human in nature the element of horror has been unavoidably swept away. After all mindless monsters are always going to be more scary than ones who have leadership and intelligence behind them. I appreciated the first half as it was good at world building, though in a selfish way I did miss the Titans there. But then the second half is so damn exciting. I remember each time an episode finished me and my friend would shout "Noooo!" at the realisation we had to wait a week for the next one to come out.

Attack on Titan is one of the best animes currently running, and it has yet to have a bad season. Over time the plot gets more and more involved and it is to its credit that it is still full of surprises despite the revelations already shown. In terms of the art I found at times characters looked different to how they did before. Lead Eren starts the season looking unlike he did before, while later on towards the end suddenly Mikasa doesn't look like she used to be drawn anymore, but they are just small issues. It might not be as perfect as the last season but this is still damn fine TV and very worthy of watching.