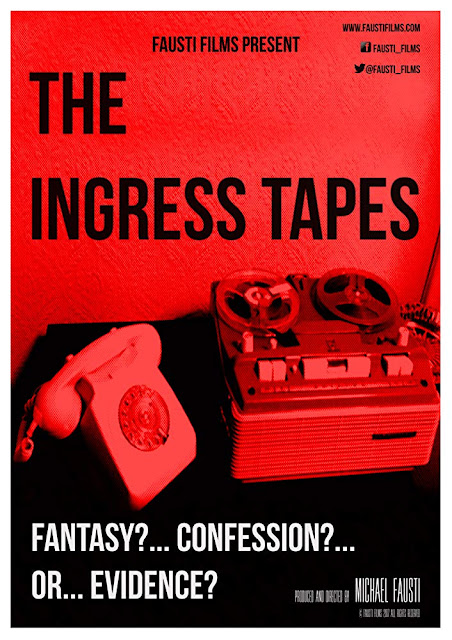 The Ingress Tapes is a short horror/crime film directed by Michael Fausti (Dead Celebrities). This is experimental, but in a different way to usual, with this feeling like found audio rather than found footage. It was filmed entirely on Super 8mm which just adds to the chilling feel of what is being described.

A tape player plays recordings of an interview with a cold blooded killer who describes in a matter of fact way the various murders he has done. This is presented in such a way as to make you question just what the circumstances were that led to the recording being done.

With grainy close up images of reels of tape playing, mixed in with grainy footage of the view from a train window, and old stairwells there technically isn't a lot to see here with the focus much more on the dialogue being spoken. There are no characters, the images only tie in tangentially to what is being spoken about, but this adds to the unsettling tone. It is the man's voice combined with what he is talking about that really adds the chill factor. He sounds like a typical man but speaks of killing children, random murder, as well as hired hits with a total lack of any sense of remorse for his actions. Rather than come across as monotone he instead sounds cheerful, proud of what does, and the times he laughs after recalling particular deaths somehow makes it all the more unsettling.

I really liked how this was shown, the tape player constantly stops and rewinds to earlier dialogue which means there are a variety of incidences that get spoken about. Each time the tape suddenly stops it was just another little jolt of uncomfortableness. The fact there is no explanation for where this recording came from, or who is doing it just makes this feel all the more authentic. It's like a Jam sketch if all traces of humour were removed to just leave the black underbelly. The Ingress Tapes does so lot with so little, a compelling dark short that just plain succeeds.