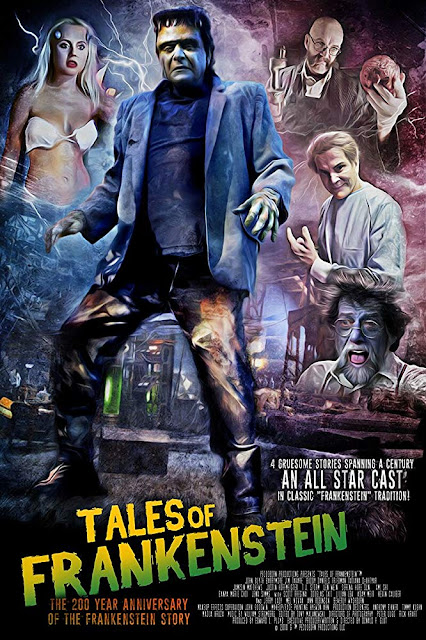 Here at The Rotting Zombie anthologies are always welcome. It seems I say this every time I speak of them, but they usually never fail due to variety meaning at least one story is going to be entertaining enough for the trade off for life spent watching. I first heard of the award winning Tales of Frankenstein back in 2017 and have today had the opportunity to see it. Despite the tale of Frankenstein's monster being a close cousin of the zombie genre I have always felt the story never quite works in modern times, it seems best suited to the past. With this anthology there are four different stories, all taking place in different time periods. The stories are all taken from director and writer Donald F. Glut's book of the same name.

In modern day a Frankenstein's monster is exploring the ruins of a castle when he comes across a portrait of Victor Frankenstein. Each story then follows a different character who came into possession of this portrait. This wraparound story is very barebones, so much so that it only really shows the traditional creature mournfully growling at the portrait he finds. The same clips are also used for flashbacks in some of the other stories.
First is My Creation, My Beloved that takes place in 1887. The hunchback Dr. Gregore Frankenstein (Buddy Daniel Friedman); a relative of Victor had also been working on bringing the dead back to life. During his studies he had fallen in love with a female science correspondent, but due to her ill health the pair had never met, though she donated her brain to him to study once she had passed. With this brain he hopes to give her a second chance at life in a younger, healthier body.
So this one lasts for around twenty five minutes and gives a good first impression of the style this anthology is going for. This is set out in style to the classic horror films from the Hammer Horror era, characters ham up their lines and throughout there is a soundtrack that creates a dream like fairytale atmosphere. I enjoyed the mild twist towards the end of this, and I liked the interactions Gregore had with the local corrupt mortician. It was a bit of a superficial story though in how beauty is prided over everything else here. 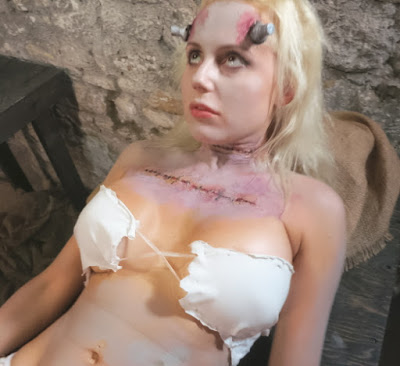 Next up was Crawler From the Grave which takes place in 1910. Helmut Frankenstein (Len Wein - the creator of Swamp Thing and Wolverine in his final film role before his passing) has recently died from a plague known locally as 'the grey death', but not before drinking a potion he had created that he hoped would grant him eternal life. In life his jealous neighbour, Vincent (John Blyth Barrymore)   had desired Helmut's prized jeweled ring and so hatches a plan to dig him up to take it, though unable to remove the ring he was forced to chop off the corpses hand, which turns out to have a life of its own.
This was my favourite of the four short films with the severed hand reminding me both of Evil Dead II, and of Thing from The Addams Family. This played out in a way that felt similar to the works of Edgar Allan Poe, recurring themes such as the neighbour thinking he can hear the beating heart of Helmut, and the guilt he experiences due to the crime he committed made this into a cautionary tale. It was almost ruined by a terrible looking CGI shot of the severed hand crawling across a white floor, it was obvious where the hand had been digitally cut off to give its severed look, while the blood that drips from it also looked bad.

Third in this anthology is Madhouse of Death that takes place in Los Angeles in 1948. This follows a P.I named Jack Anvil (Jamisin Matthews) who seeks shelter at a remote house he finds after his car breaks down during a thunderstorm. There he discovers the creepy Dr. Mortality (Mel Novak - Bruce Lee's Game of Death, Samurai Cop 2: Deadly Vengeance) and his sinister servant Mogambo (T.J Storm - Punisher: War Zone) who have bizarre plans for him that include a gorilla! Despite a strong start this was the weakest of the four shorts that didn't really do too much. I enjoyed the Film Noir style voiceover of Jack Anvil, and I liked the desaturated look. but things such as a cheesy brightly lit dream sequence set on a tropical beach made this feel a bit disjointed. 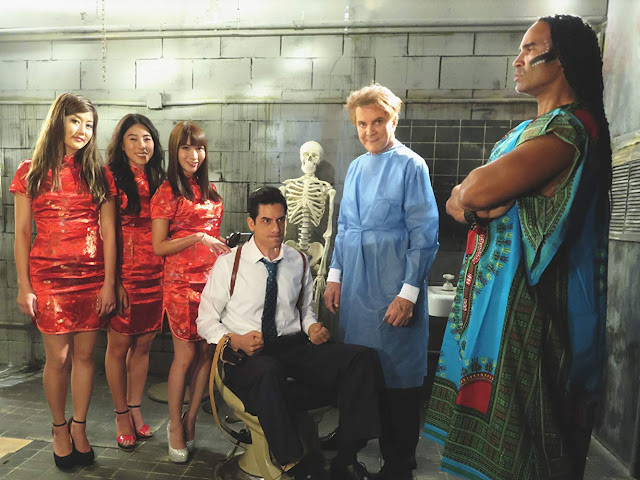 Finally was the Transylvania based Dr. Karnstein's Creation that takes place in 1957. Dr. Karnstein (Jim Tavare - Harry Potter and the Prisoner of Azkaban) has relocated to a remote castle that local legend says was once the home of vampires. There he hopes to create a controllable monster using the notes he had gathered of Victor Frankenstein. However his plans go awry when it turns out the legends about vampires might actually have some truth to them.
This had the biggest Hammer Horror vibe to it, especially with the fantastic look of the monster here. The story did something I hadn't seen before and it was all the better for it. I loved the freeze frame ending shot that reminded me of no end of Italian zombie films from the 1980's. This one did suffer from some bad acting from some of the extras, and it dragged a bit towards the middle though.

While there is a more old fashioned vibe going on here there are still scenes of violence peppered throughout with people getting shot and stabbed, and blood flowing freely at times. With the exception of the fourth film the plot lines are fairly generic mostly, but I did enjoy this old style of movie monsters. I would say there is not really much of the monsters themselves in these shorts, though I guess the title is Tales of Frankenstein, and not Tales of Frankenstein's Monster! While these do all feel a little bit similar to each other the jump in time periods was a welcome addition. While this may have its faults it is also a lot of fun and has a lot of heart to it.