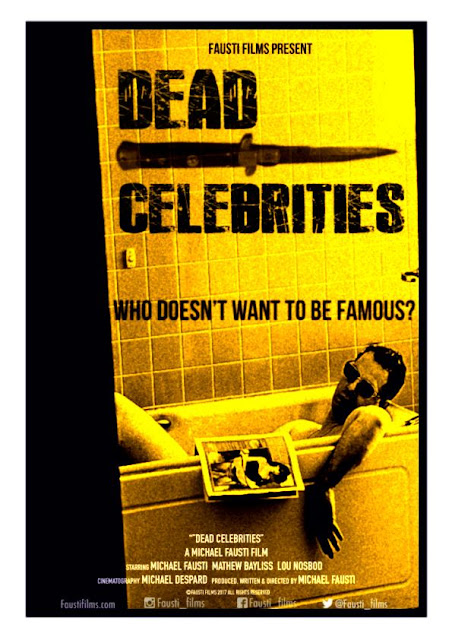 At the same time I received a screener for the great 'found audio' The Ingress Tapes I also received a screener for another short horror from U.K director Michael Fausti, this one called Dead Celebrities that he also wrote. I was pretty confident I would also enjoy this and so it was with some joy that my assumption turned out to be correct.

Mick (Fausti) offers an explanation for just why so many celebrities have died in bathrooms to his hotel co-worker Joe (Mathew Bayliss). This explanation being secret rituals performed in order to attain fame and fortune, that was first discovered by director Tod Browning in the 1920's.

The whole idea behind this is plausible nonsense, and it was told in such an entertaining way. The short mainly consists of Mick recounting to Joe the background to the bathroom based ritual he has discovered, his narration set to a series of flashbacks that follow famous dead celebrities such as Lenny Bruce, Claude Francois, and Elvis Presley (all of these also played by Fausti). I loved that a quick Google search after watching this revealed every person Mick talks about actually were found dead in bathrooms in real life, that was a fun discovery. The whole narrated story reminded me a lot of the type of things author Robert Rankin would often write about in his surreal novels.

The very best thing about Dead Celebrities is Fausti who steals the show due to the character of Mick. The serious way this character talks no matter how ridiculous the topic, and his intense facial expressions were hilarious, I loved the inflection he put on certain words, and the way he would raise his eyebrows in tune with certain words. His deadpan delivery brought to mind Dr. Rick Dagless from Garth Marenghi's Darkplace. Micks interactions with Joe led to some of the funniest lines set as a back and forth between the two.

There wasn't a single bad moment in the whole ten minutes of Dead Celebrities, the comedy was spot on, and it was helped immensely by the entertaining explanation given for just why so many famous people are found dead in bathrooms. This is held up by a great score that compliments the surreal story being told, as well as a nice grindhouse way of directing, complete with grainy footage, and lovely use of close-up, and fast effective editing with every shot feeling relevant. Somehow even better than The Ingress Tapes, check this out if you ever get the chance.