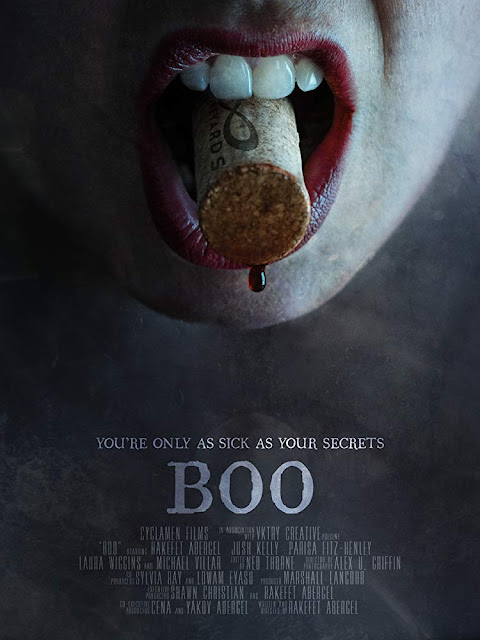 I first heard of Rakefet Abergel when I saw 2017's award winning Jax in Love in which she not only wrote the story, but also starred as the psychotic loner Jax travelling the backroads of America looking for love. She is now back with her latest film which again she wrote, and stars in, but which also marks her directorial debut. Boo is a fifteen minute horror about how addiction is not only harmful to you, but those you love also (and is not to be confused with the terrible feature length Boo from 2005).

Jared (Josh Kelly - Transformers: Revenge of the Fallen, Transformers: Dark of the Moon) arrives to pick up his fiancee Devi (Abergel) from her weekly AA meeting, but is shocked to find her panicked and covered in blood. As he drives her home flashbacks reveal just what happened to put her into such a state.

I'm a sucker for stories that start in the present and then go back in time to show how events led up to that point and so it was a pleasure to see that used here, at least for the first half before that has all been explained. I really liked how this was told, rather than just one long sequence you are instead given little bites that have a natural flow to them. Whenever Devi gets triggered in the present we then get to see how that relates to what she has gone through. So when she inhales deeply to get her breathing under control we then see her standing outside the AA meeting with friends while she inhales the smoke from a cigarette. Then later when Jared goes to touch her she recoils and we then get to see exactly why she is reacting that way.

Abergel gives a great central performance and gives a great contrast between her normal self when she is hanging with her friends, and the frenzied panic stricken mess she becomes. It was also nice that her upset part was varied rather than being one note, it made her seem like a more believable character. The rest of the cast also were great in their roles, I enjoyed the conversation her and two women have (played by Laura Wiggins - Shameless, and Parisa Fitz-Henley - Luke Cage) which gives the first hints that maybe things aren't exactly what they seem. It might have been obvious there would be some kind of twist, and even what sort of twist that would be, but it was still fun to see how the story gets there.

Boo follows the trend of more women in horror, and films in general, it is always good to see a female take on horror, and this went more so with it stated that over 50% of the cast and crew were female. For me personally this felt like a step up from Jax in Love, I enjoyed the more condensed story, and the format with how it was shown. A take on an old idea, but one that was entertaining from start to finish.

Posted by Daniel Simmonds at 02:30