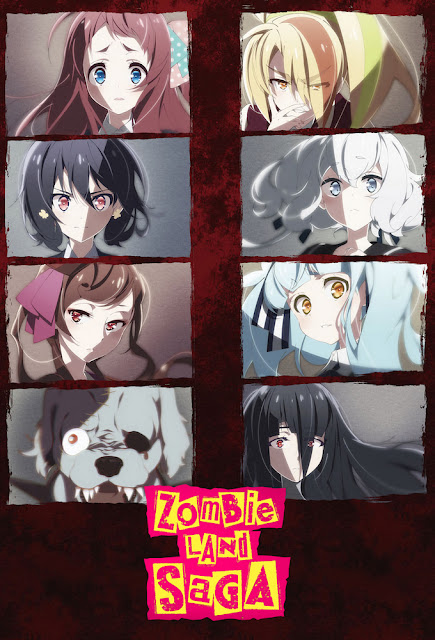 I don't watch nearly enough anime, so recently I have been making an effort to get through the backlog of stuff on my list. While the premise behind Zombie Land Saga didn't really sound like my thing, the fact it had the undead in it meant my hand was forced. With season 1 being just twelve 23 minute episodes I zoomed through this in a week, a good sign as the last anime I watched - Clockwork Planet was also twelve episodes, yet took me the better part of six months to drag my way through.

Sakura Minamoto (Kaede Hondo) is a normal Japanese girl who has aspirations of becoming a pop idol. On her way to hand in a application form to audition to be one she is hit by a truck. She awakens in a strange mansion and is shocked to see it is full of zombies, she flees but eventually comes to the realisation that she too is now one of the undead. A mysterious man - Kotaro Tatsumi has somehow brought her, and six former pop idols from history back to life as zombies. His goal is simple, to create the ultimate pop idol group in order to bring attention to the prefecture of Saga, doing so he hopes will save it from decline. 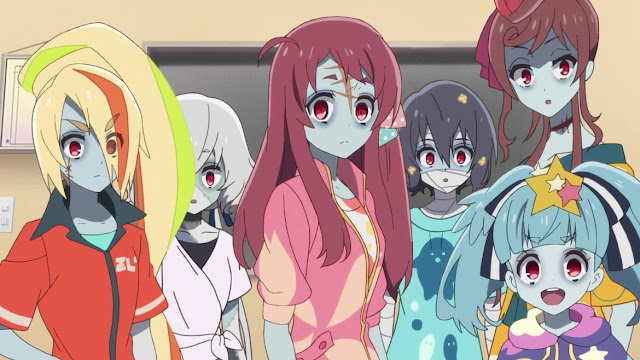 So from the summery it can be inferred that this is a comedy. While it is comical it never turns into the sort of farce that animes such as Excel Saga were. Instead it keeps things relatively normal outside of the crazy situations the group get into. This also surprised in that it has a lot of heart to it at times with characters growing as people over the course of the season. Some of the characters get episodes dedicated to them, that shows how events from their pre-death lives has impacted on who they are now, and the consequences of their passing. Saki Nikaido for instance used to be the leader of a biker gang, and comes across a girl that she realises is her former best friend's daughter. She has aspirations of keeping that same gang alive. The youngest member - twelve year old Lily Hoshikawa in a different episode discovers her father and the impact her death had on his life. I did quite like that some of the characters suffer PTSD from their deaths, in particular for Ai Mizuno who died after being struck by lightning during a gig.

While these characters are all undead the horror elements are kept to a minimum and are usually used for comedic effect. There is a hapless police man for instance who on multiple occasions stumbles across one or more the group in the town and reacts in blind terror each time. Another episode sees a potential business partner of the group have her own mini zombie movie moment as a late night bathe at some hot springs sees her stumble into a scene that is directed as pure horror. I loved these moments but it really isn't the focus of Zombie Land Saga. One the characters - Tae Yamada though is a constant reminder of the horror roots of zombies in that she is the one character who didn't 'awaken' and so still acts like more of a traditional rotter with a penchant for biting heads. Also all the zombies can easily lose their limbs and heads which makes for some amusing scenes when they are trying to hide this fact. 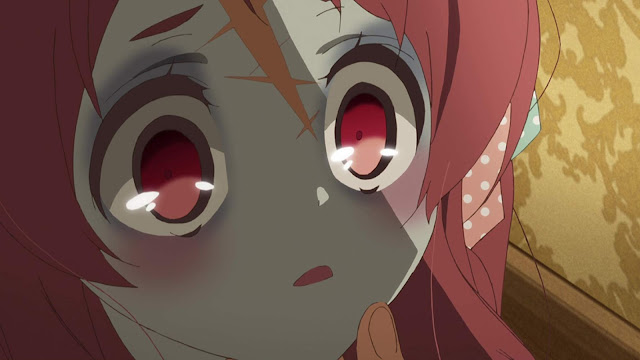 Outside of the zombie element the biggest focus is on the groups rise to stardom. Each episode usually involves them at a different stage in their progress, whether taking part in an advert for a chicken restaurant, doing corporate events, or playing at a music festival. This was the part I was less interested in just due to the simple fact it didn't really appeal too much. Each episode usually has at least one song in it which leads to some quite uplifting moments, but then others, like the season finale just brought home the fact these songs are not the bit I enjoyed the most. Saying that it was kind of funny that the first song they do in the very first episode was a death metal one. To play in public the group wear makeup that makes their green flesh look normal. This is used on various occasions as a plot point when the makeup comes off, but all too often it seems a bit convenient with how easily it stays on.

The evidence points to me liking Zombie Land Saga, that it took me just a week to get through the whole season shows it must have been doing something right. This was a nice easy show to watch, stress free, and with low stakes it satisfied every time. This is inoffensive enough that I would say give it a try, it is something different.

Posted by Daniel Simmonds at 14:19