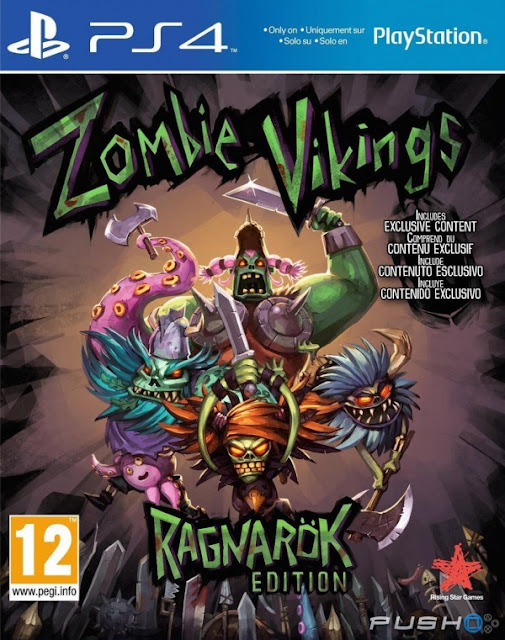 Usually if I haven't played a game to completion then I won't review it, or at the very least I will just do a preview of it. For scrolling beat-em up Zombie Vikings though I have made an exception. This game was just a frustrating experience for me, and not for the reasons you may think. It boils down to the fact that I am almost certain this is straight up impossible to complete if you play it in single player, and again not for reasons you may think. It has been at least a year since I last played it so this review may be fuzzy around the edges, I just couldn't face trying it again when I knew the results would be the same.

Set in the time of the Norse Gods, Loki steals Odin's magical eye. In order to get it back Odin resurrects four legendary vikings as zombies, and tasks them with pursuing Loki across the lands to reclaim the stolen eye. Along the way they battle armies of worms, as well as discovers the origins of football...which is where for me my journey ended. 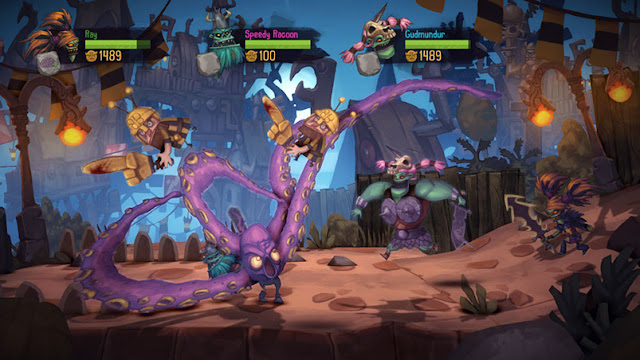 So all the good things first. I thought the humour here was genuinely funny, the dialogue is great with a Monty Python vibe going on that appealed a lot. The stages are interspersed with cut scenes, and the characters you play as all get their own back stories that reminded me a bit of Medievil. So you choose as one of four characters, my playthrough I was Caw-Kaa - a female who had bird based attacks to her repertoire. Each of the four characters seemed varied with their differing sizes leading to difference in how they played. This is backed up by some beautiful art, the graphics are charming and look hand drawn making the very varied levels a joy to fight through.

I have read in some reviews that the style of this game led to repetitiveness. For me, whose favourite genre of video games at one time was the scrolling beat-em up I never found this boring. Levels are frequently being changed up so that not only are the locations constantly different, but also the enemies you face are constantly being completely changed up. It is the fact the game decides to try something to split up the fighting that soured the experience completely for me. I think I must have been at least halfway through the game when I got to the point that I just could not get past. 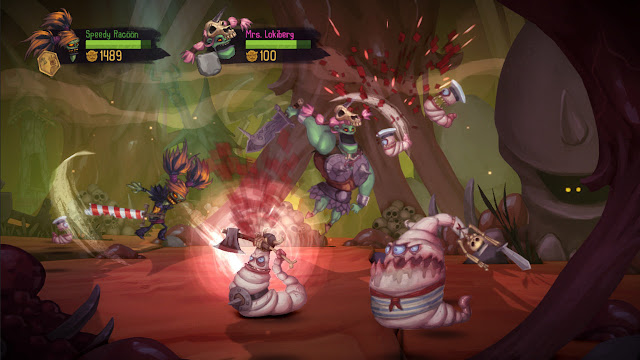 Zombie Vikings is a large game with over 25 stages to it, one of these though it was decided to change the genre completely, to change it into a sports game for just one tiny stage. In this ill fated stage you are required to have a game of football against an A.I team of three or four players. All you have to do is score 10 goals and the level is over - easy right? The way this falls apart is that in single player you are not compensated for the lack of people on your team. It ends up just one player against a whole enemy team, each time they would rush forward, one of them scoring while another one attacks you, each goal scored in a matter of seconds. It seemed so one sided that I was convinced this was meant to be an unwinnable situation so I let them win the first time, only to be greeted with a 'Game Over' screen. For the next hour or so, try as I might I was unable to even score a single goal out of the ten needed. With a team of more than just one person this might have been achievable, but after an hour and several hundred goals scored by the A.I and none scored by me I realised with a sinking kind of horror that this was the end of the game for me. I can only imagine this was never play tested with a single player trying this stage. For the life of me I don't know what the creators were thinking sticking in a stage that is not only frustrating as all Hell, but also a complete genre swap to the rest of the experience.

If you are thinking of playing Zombie Vikings with friends then you can ignore the majority of this review, for me though the baffling decision to put such a frustrating and out of place sports level in a fighting game really did ruin this, and so if you are thinking of playing this alone I would say avoid like the plague! It is a huge shame as the rest of the game was so fun to play, and the humour is so good, massively disappointed.