The Rotting Zombie's Round-up of Horror News for May 2019 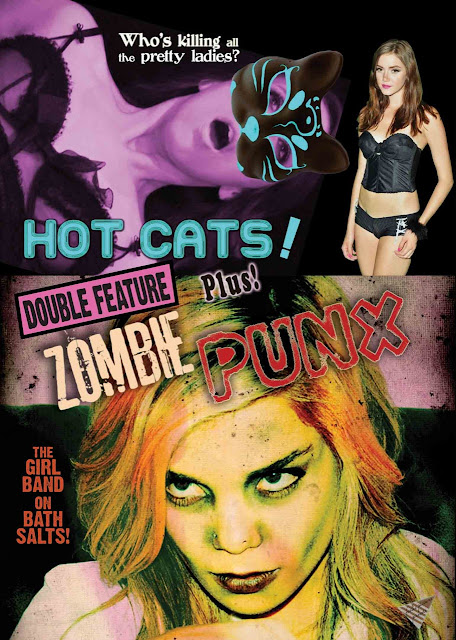 Another month and some changes to the way I do my blog. With my day job hours changing to four longer days rather than five normal length days it means I won't have time to do my blog in the evenings. Instead Monday is designated blog day, set aside to do a weeks worth of blog posts...that is the plan anyway.

Principal production has began on psychological thriller Paradise Cove and stars Mena Suvari (American Horror Story) and Todd Grinnell (Grace and Frankie). They play a contractor and his wife who have gone to Malibu to sell his dead mother's beach house. However they become terrorised by a crazy homeless woman (Kristin Bauer van Straten - True Blood) who lives underneath it. This is to be directed by Martin Guigui, with a script by Sherry Klein.

A special collectors edition Blu-ray has been released earlier this month for entertaining horror comedy Murder Made Easy, I said in my review for that "I came to this with expectations of a dull murder mystery and left having really enjoyed what I had witnessed". The Blu-ray from Scream Team Releasing was released on 21st May and features extras including audio commentaries, deleted scenes, rehearsal footage, bloopers, trailers, 5.1 surround sound and more.

Production is set to begin on the next installment of the found footage franchise Hell House LLC. Hell House LLC III: Lake of Fire started production at the start of May and will premiere exclusively on Shudder later this year. Actors from both Hell House LLC and it's sequel Hell House LLC II: The Abaddon Hotel are set to return. Terror Films president Joe Dain has stated it will be taking inspiration from the first film, I think this is a good sign as the sequel was vastly inferior. In this final chapter (which takes place a year after the events of the second film) a billionaire buys the notorious hotel in order to host his popular interactive show 'Insomnia'.

Urban horror film Room 9 is now in post production. Inspired by the works of Jordan Peele (Get Out, Us, The Twilight Zone) this is written and directed by Thomas Walton, and is about a bed and breakfast with a tragic past. It stars Kane Hodder (Friday 13th series), Michael Berryman (The Devil's Rejects) and Scout Taylor Compton (Rob Zombie's Halloween 1 & 2). 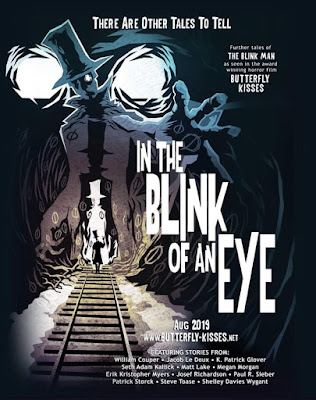 In The Blink of An Eye is an anthology of short horror stories all based on the excellent found footage Butterfly Kisses. The book goes deeper into the fictional urban legend of 'The Blink Man'. This legend states that if you stare into the Illchester tunnel for an hour without blinking at midnight a supernatural being known as 'Peeping Tom' will appear. The anthology is written by a multitude of different authors and has such stories as a PTSD suffering war veteran who starts to see a hypnotist, a student investigating her teacher's apparent suicide, and a holy man whose scarred eye is always open. Check out the Kickstarter here.

Coming soon to Android and iOS devices is Slasher - an app that is designed to be a social network for horror fans. its intentions are stated to be 'a space where such things like the human body being used in horror movies and art aren't a problem'.

There is an IndieGoGo campaign currently running to raise additional funds for horror film Kill Giggles. This feature length film is about a serial killer that targets clowns, the aim being to make a film where clowns are the victims rather than the aggressors. Check out the page here where there are the usual assortments of perks based on what you pledge.

On the subject of crowd funding The Curse of Valburga is approaching the end of its campaign which isn't doing so well. This slasher/comedy is about an old mansion with a dungeon full of degenerates. Their IndieGoGo page can be found here, again with an assortment of perks available.

The final news concerns Frolic Pictures which is celebrating its 10 year anniversary with new Jared Masters reissue titles on double and triple feature DVDs. These include Premature Birth/Blood School/Madam Ans' House of Shame, The Magical Pyramid/Ballerina Massacre, The Pleasure Girl Gang/Kittens in Heat/Diary of a Teenage Call Girl, Lesha, My Secretary/Cannibals Vs. Virgins, and Hot Cats!/Zombie Punx.
Posted by Daniel Simmonds at 11:48