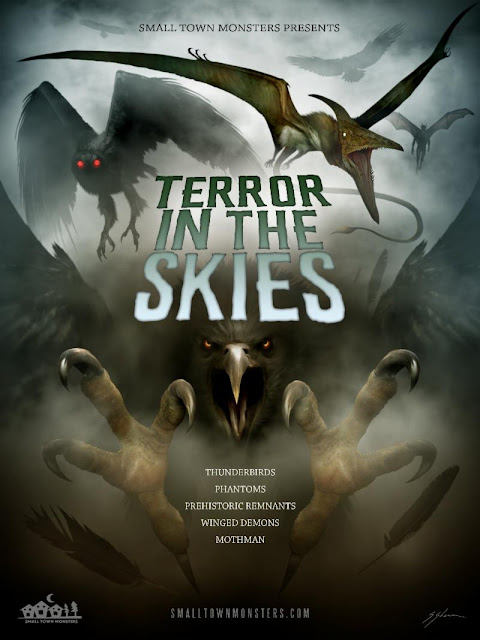 I don't often cover documentaries on my blog, but upon hearing of Terror in the Skies (directed by Seth Breedlove who also co-wrote this with Mark Matzke) I felt I needed to check it out. In general life I have a fondness for birds, and so a documentary that deals with giant bird sightings in America sounded interesting to me.

Over the 68 minute run time several different types of flying monsters are covered. The area covered here is Illinois, which is best known in terms of this subject matter with the famous Point Pleasant mothman sightings in the 1960's. I fully expected that to be again the focus here, but refreshingly it is only really mentioned in passing (this is a spiritual sequel to 2017's The Mothman of Point Pleasant). That topic has been done to death and so it was nice that it wasn't covered yet again here. Instead we get a multitude of accounts from over the years that go all the way up to the Chicago Mothman sightings of 2017, something that is teased at the start of this, then becoming the final story. 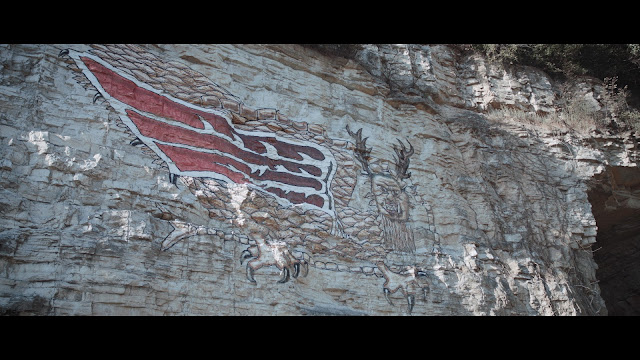 Of the different subjects looked at it was the thunderbirds that I found to be the most interesting, they are something I had heard of, yet not something I had really knew much about. I liked how it explores the origins of these tales, and goes back to the myths of Native Americans before getting into the actual evidence. The documentary uses talking heads for a lot of the discussion into this, from eyewitnesses, to paranormal experts and historians. I expected a one sided approach, and initially it seemed it was going for the side of believing everything, but later on there is at least one speaker who throws doubts on a lot of the testimonies. This is most apparent with the Chicago mothman sightings with it being said how strange it was that in such a populated city more people didn't see it. It also talks about how when something gets more popular more people are likely to come forward with crazier stories.

These stories are all backed up with recreations and photos, and even in one case video evidence. The recreations are done in a variety of ways, never really with actors, but mainly with CGI effects of giant birds superimposed onto scenes, or in two cases cartoon figures placed over photos. Mostly it talks of people who just see these creatures and then have little to no interaction with them. The best account was about a child who was literally snatched off the ground by one winged 'monster'. I liked how this was shown on screen, and was kind of scary if you think about it. Mostly the documentary concentrates on real life explanations rather than supernatural explanations which does make sense, but as a viewer the brief look into paranormal reasons was a lot more interesting. I admit towards the end of this I was getting a little bit bored despite what I was seeing being things I had not heard of before. Aside from the attractive recreations this follows a traditional approach, mostly narrated by Lyle Blackburn who speaks in an easy to understand manner, and with mysterious sounding music that felt very generic for this type of program.

Being a documentary it isn't going to be the most exciting of things to watch, but there were a decent amount of cases covered here, and by focussing on Illinois it went along in a cohesive fashion. I appreciated the information provided here, and it was good this wasn't one sided in what was being said, but like a lot of documentaries it can sometimes feel a little bit dry, even for an exciting subject matter such as this.  Terror in the Skies comes to Digital HD and DVD on 7th June thanks to Small Town Monsters.