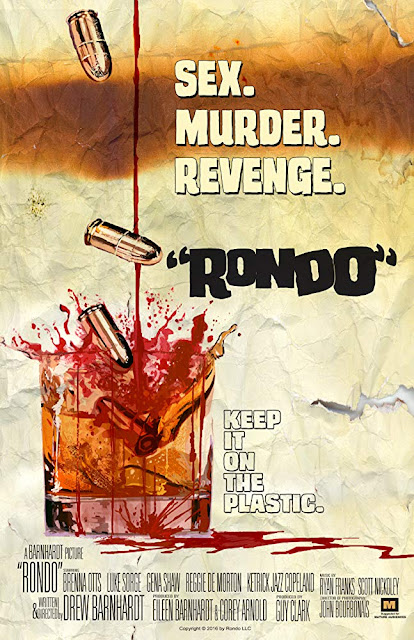 Rondo is a revenge thriller written and directed by Drew Barnhardt and which on paper didn't really sound like the most logical fit for this site. However it sounded interesting and so I requested a screener, something I am very glad I did as it turns out this more than earns its place here. I have been watching quite a few movies lately that pay homage to the exploitation films of the 70's. With Rondo you have a film which does just that, but which decides to pay tribute whilst keeping the trappings of modern day film making.

Troubled veteran Paul (Aaron Paul lookalike Luke Sorge) is an alcoholic, and homeless, living on his sister Jill's (Brenna Otts - Westworld) couch. She gives him the name of a therapist she has met (Gena Shaw) believing she will be able to help her brother pull his life back together. The therapist tells him that sex is the answer and gives him an address and a password 'Rondo'. It turns out this is for some sort of sex party for rich businessman Mr. Tim (Kevin Sean Ryan - Halloween: The Night He Came Back), and which is run by a man named Lurdell (Reggie De Morton). However while there Paul inadvertently discovers himself and the other participants are going to be murdered and so he flees, forgetting in the moment that he had previously given the killers his address... 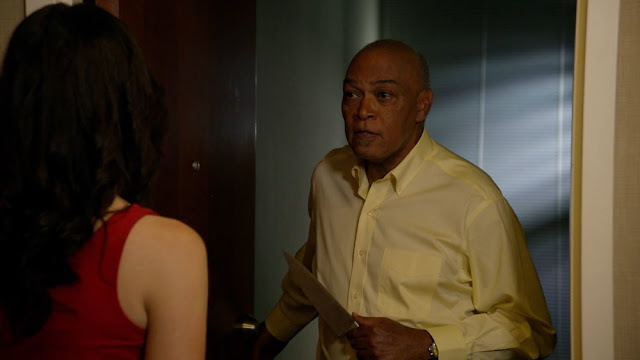 Rondo plays with your expectations quite a bit in that the protagonist changes a couple of times throughout. Main characters become side characters, side characters become the stars, with usually a violent transition between the switches. It is also unique in how little any of the protagonists speak. Paul for instance is mostly silent, he only really gets a few lines of dialogue, with characters he interacts with happy to fill in the silence with their own thoughts. Jill is another character who really doesn't say a lot, yet her smouldering facial expression is plain to see. The antagonists speak a lot more, though even with them there is a character who again only has a few lines despite having some lengthy screen time. The silence is filled in with a fantastic soundtrack, it compliments the visuals in an impactful way. Rather than make this seem like a music video it instead creates a feeling of moving art with scenes seeming choreographed in interesting ways.

Helping move the story along is the inclusion of a narrator who talks about the lead in the third person which creates a whimsical feeling. The way he talks brought to mind the video game The Stanley Parable, it gives a strangely fairy tale type feel to what is happening which helped in masking just how unexpectedly violent Rondo can be. The violence is used sparingly for the majority of this, yet when it does appear it can be extreme, such as a part when someone is hacked up with a razor blade, the blade being shown to go deep into flesh multiple times. Then the blood soaked finale with no end of slow motion, almost arthouse style shots of people getting shot, squibs exploding spraying out blood that drips off the camera lens. Practical effects all the way here. This over the top mayhem is where Rondo is at its exploitation film aping best, where it becomes most obvious, especially with what characters are wearing. 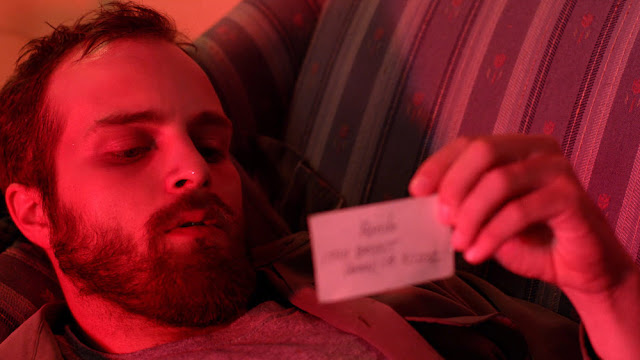 Occasionally the lack of dialogue can lead to moments of brief frustration. There is one protracted scene in an apartment for instance that went on for long enough with nothing much really happening that it almost started to drag. Usually the silence is really helped by that soundtrack though. There was also just the one moment that had a location change that seemed to exist only for stylistic reasons, and was jarring enough that I briefly was taken out of the film. I liked the plot developments along the way, especially the twists of the protagonists changing, and the way certain scenes are played out. Two different people knocking at two different doors that play out simultaneously leads to double revelations that feed into each other in a satisfying loop, cleverly done. Some of how this is created though could lead to an accusation of too much style over substance, yet that can be seen as being at the heart of many exploitation films when you boil them down, they are hardly known for telling deep stories.

Rondo is an exciting, darkly comedic revenge thriller that doesn't fail to switch things up and go to unexpected places in its 90 minute run time. It weaves exploitation with arthouse making for something that visually is very arresting and which in its over the top comically shocking manner became something that was entertaining to watch. Rondo is out on DVD and VOD on June 4th thanks to Artsploitation Films.