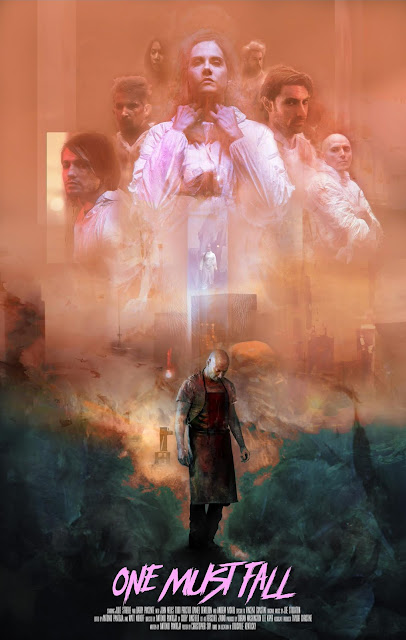 One Must Fall is a horror comedy that comes from Antonio Pantoja in his feature length directorial debut, who also wrote and co-edited this. It does something a little different in that the horror and comedy aspects are kept separate from each other. It is all fun and games until the killing begins, then the humour fades away to make room for some pretty extreme violence.

Having recently been fired from their office jobs, Sarah (Julie Streble - Volumes of Blood: Horror Stories, The Zombie Movie), and her best friend Alton (Andrew Yackel) are forced to get the first job they can find. This turns out to be working as part of a crime scene cleanup crew. The second day on the job they head to an abandoned paint factory that had been host to a series of murders by a serial killer (Barry Piacente) that is loose in the city. However it soon becomes apparent this killer never actually left the scene of his crime and is more than happy to add Sarah and her colleagues to his kill count. 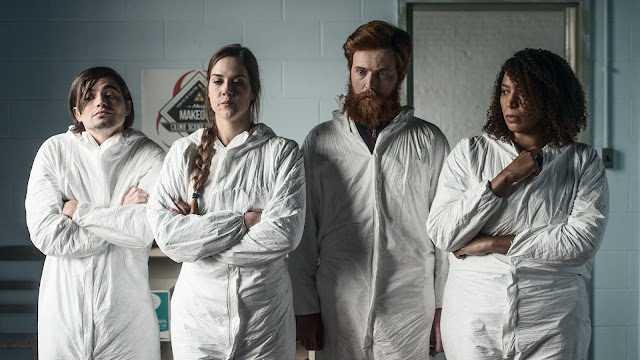 To start with the comedy part of One Must Fall is in abundance. There are characters, such as Sarah's office boss who are walking caricatures, while dialogue is geared towards humour such as Sarah's mother talking to her about how scared Sarah got watching Psycho as a child, and the scene with the assistant of the cleanup crew manager telling the new starters not to get eye contact with him. It is all faintly ridiculous in a good way. This first act also includes a fun cameo by the legend Lloyd Kaufman, his weird conversation about finding a body was a great throwaway moment that fitted perfectly with the vibe. It makes it all the more abrasive when the horror begins and the humour quickly fades away.

From the gentle beginning and with a core cast of characters who all seemed integral in their own ways I figured the body count would be low, and predicted a bunch of these characters would escape unscathed. How wrong I was! The killings are merciless here with the least obvious people getting attacked in brutal ways. In a slasher it is the kills that are the highlight, but there is added to this a sense of surprise in that it seems that anyone is fair game. The practical effects are One Must Fall's real highlight, and have pedigree behind them as the special makeup effects artist/designer for this is Vincent J. Guastini (whose long list of credits includes iconic films such as Spookies, I Am Legend, Requiem for a Dream, and The Dark Tapes). Here you get a character scalped, machete kills, a circular saw kill, fingers sliced off, a blade jammed so hard into someones head that their eyeball pops out, and even a character whose face is cut off! All of this looks fantastic, added to by some nice looking blood that glistens. Near enough every death scene here worked very well and always seemed so unexpected. 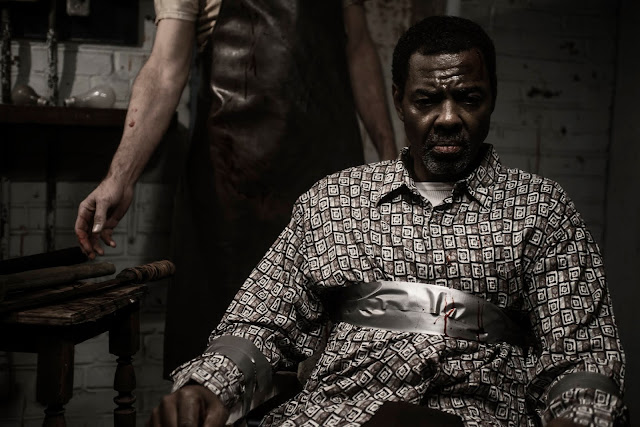 Being a slasher the actual plot isn't the strongest when the action gets going, and there isn't really a satisfying conclusion. The set-up however was pretty good. It may feel almost like a different film at the start, but I enjoyed how the characters were introduced so that you got to know them a little bit before the horror begins. I also thought the idea of the killer never actually leaving the crime scene and then targeting the cleanup crew was great, I can't recall having seen that done before. Usually with films like this the killer is shown as more a monster than a human, but with One Must Fall Piacente gets quite a bit of dialogue, speaking in a quiet mild way that made me think of Liam Neeson's way of talking in Taken. This all moves along at a fast pace, for me the roughly 90 minute run time flew by with no down time where it matters. This is all backed up by a decent score by composer Joe Stockton that fitted in well, and some competent directing. I guess the one part I personally didn't like was several times when characters are panicked and running around the camera seemed attached to them bobbing up and down in front of them as they ran. This worked in creating a disorienting sensation, but seemed slightly out of synch with the rest of the way the movie was filmed.

One Must Fall features some truly fantastic looking special effects and makeup effects, that coupled with inventive kills leads to a lot of satisfaction for the gore hound in me. I felt the transition from comedy to horror actually worked for this when usually it feels like too much of a change up, and the characters were mostly pretty likeable for once.