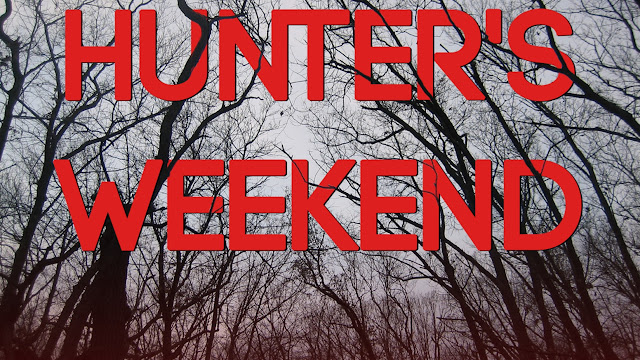 Hunter's Weekend is a found footage/mocumentary comedy horror film that comes from writer and director Amy Taylor. Horror like many genres is one where the majority of directors are male, off the top of my head Tricia Lee (Blood Hunters, Silent Retreat) and Jennifer Phillips (Blood Child) are the two directors that came to mind as the few examples I could think of for feature length films. Taylor's intent seems to be to give a female voice to horror, and with the small crew being made up of 60% women, and with a subject matter about toxic masculinity it makes for something a little different.

Lyle (Benjamin Guenther) is a park ranger at a national park who along with his hapless assistant Victor (Christopher J. Young) holds an annual hunting competition there. This year they have hired a cameraman in order to get a documentary made of the event. It turns out that the participants are all serial killers. However the duo soon discover that there is a rogue killer on the loose, one who is breaking the rules by murdering the other players. More due to his beloved event getting ruined than a sense of responsibility for his guests Lyle and Victor set out to find and stop this rule breaker... 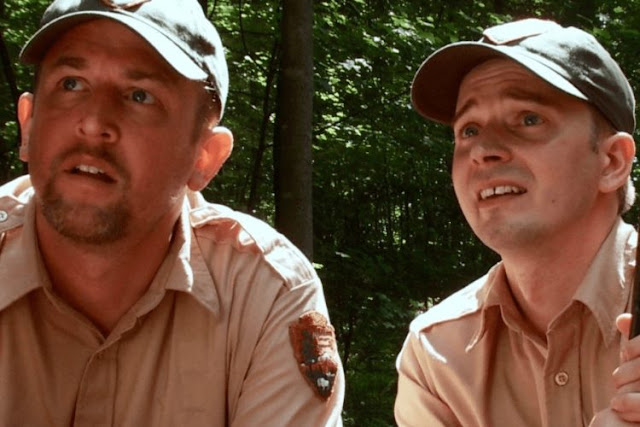 There are some additional things you have to look out for when reviewing found footage horrors, the most important for me is how believable is the central premise of everything just happening to be filmed. It works here due to the documentary aspect, having hired a cameraman the two are going to make full use of him. You soon come to realise Lyle and Victor themselves are also serial killers which gives a contrast with What We Do in the Shadows due to the comedic nature of this, and having bad people hiring a filmmaker. It felt a little weird how it was revealed about the nature of the people taking part in the event. It is left up to the viewer to piece together that the cast are mostly killers. Eventually this comes really obvious from the dialogue, but I spent a good ten to fifteen minutes of the start of this confused, trying to work out in my head what all the throwaway comments meant. When they find a severed hand and work out it belonged to a notorious killer I was thinking 'how on Earth did they know it belonged to a serial killer?' due to not realising the nature of the contest. Even then I never did work out what exactly the aim of the event was, were these people there to kill other humans, or where they hunting animals? I found a lot of my questions to initially be distracting from the unfolding plot.

While the cast for this was quite small the actors for Lyle and Victor were chosen well. The characters come across as an odd couple with Lyle being the straight man, and Victor being his more dense partner. Both characters are portrayed as idiots, but loveable enough in their own way. Sure they are bad people, their M.O being females of any type, but they never explain what exactly they hate about women, and their interactions with the one they encounter in the movie is hardly hate filled. The transition of found footage in the modern day has gone from hapless friends being hunted (The Blair Witch Project), and more the star of the show being the bad guy (Capture Kill Release, Creep). There was a fun blend here of the stars being bad guys, yet caught up in the events of a different bad guy, rather than being there to set the plot. Lyle's over confidence and inflated impression of his abilities brought to mind a little bit of David Brent from the U.K version of The Office. I loved the way his character would eye roll, or mouth words at the camera when people were talking whose viewpoints he didn't agree with. Meanwhile Victor more than anyone reminded me of Charles Boyle from Brooklyn Nine-Nine due to his hero worship of Lyle, as well as his cowardly nature. 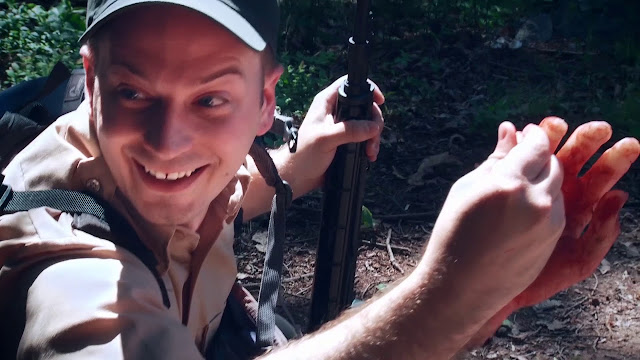 Hunter's Weekend is split over the course of several days, in reality the film itself was filmed over just five and a half days. Despite a lack of many characters this remained involving enough, though at times more characters, or at least more screen time for characters would have helped. With a budget of under 10k it may well be this wasn't feasible. As it was we get introduced to a few different characters, but then others are mentioned only to actually be seen in the end credit kill montage. The identity of the mysterious killer was very obvious right from the start, but I see this as intentional, more down to the comedic idiocy of the protagonists than an attempt to have a legitimate air of mystery over it. This is a mostly male cast, all of which come across as stupid, but it never felt mean spirited in its presentation of males. The special effects are low key throughout with violence usually implied rather than shown, again I imagine this is due to the budget.

I liked the comedy here a lot, it was sadly refreshing to have a horror comedy that isn't full of sex or bodily function jokes. I also liked the character's interactions with each other as the dialogue was frequently amusing at times, especially with the odd friendship of Lyle and Victor.These were more likable than misogynistic killers should ever be. The plot itself was quite simple, but it was saved by the witty script. Despite any issues I might have had this was an entertaining movie, and it maintained for the most part a decent balance between humour and horror. Hunter's Weekend is currently in a festival run so check it out if you get the chance.