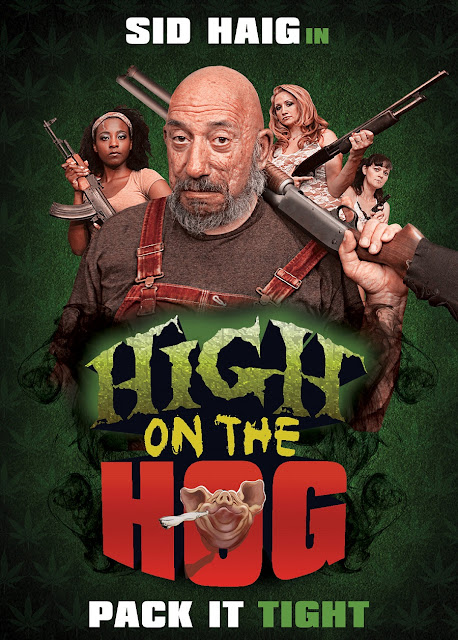 When I found out that the modern day grindhouse film High on the Hog starred Sid Haig (House of 1000 Corpses, The Devil's Rejects) I knew I just had to see it. This isn't really a horror, but it fits in right at home in the genre due to its dedication to recreating the feel of a 70's exploitation film. What would otherwise be a simple enough story is made much more involving due to this reverence for its inspirations by director Tony Wash.

A deadly strain of weed is being sold in the city, a strain which causes its user to lose their mind, and which is causing an increasing number of fatalities. In actuality it is the result of a corrupt politician hoping to halt the legalisation of marijuana by causing a new scare in the vein of 'reefer madness', but that isn't known to the DTA agents investigating this outbreak. Loose cannon Agent Dick (Joe Estevez - Samurai Cop 2: Deadly Vengeance) thinks he has pinpointed the source of this bad strain to a man affectionately known locally as Big Daddy (Haig), who grows weed out on his farm. Dick is prepared to go to any lengths, no matter how illegal, to get his man. 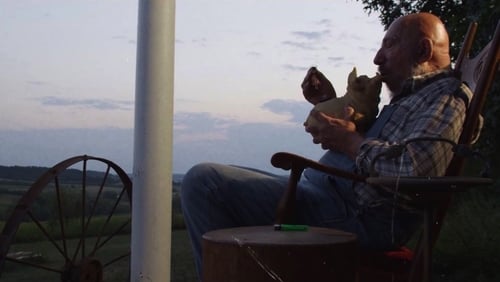 So the first thing that has to be mentioned is how choppy this all is. The film is made to seem like it is poor quality with frequent moments when the film 'burns up' as well as the inclusion of 'missing reel' sections whenever something juicy is going to happen. With this comes a very fast paced editing style with many shots only being a second or so long before switching to the next, over and over again. There are also semi-subliminal images edited into the footage, and out of context shots, such as of half naked girls dancing spliced into it as well. Rather than make this a confusing mess though it really adds to the grindhouse/exploitation angle that make up the bones of High on the Hog. This also features one of the best 'bad trip' montages I have seen in a movie of this type. The way this starts with a girl smoking some contaminated weed for us to then see her perspective was so good looking. As her friends all turn into plasticine figures, the camerawork and editing goes into overdrive, and we see her heart and veins (also as plasticine), it creates a really disorientating and suffocating feel that is perfect for what this scene was going for.

This is full of nudity, drugs, and eventually violence, all are over the top, and with the nudity in particular gratuitous, you even get topless girls dancing over the end credits. This fits perfectly with the sleazy style that has been gone for. You could say it has no place in the modern world, but to not have it would be nonsensical as it is integral to the type of film it is aping. Drugs are at the heart of the story here, and there is lots and lots of pot smoking, yet it is never done in way that demonises or promotes drug use, it is more a neutral stance. The federal agents are not portrayed in any way as the good guys here, instead, by making the awful Agent Dick as the main face of this group you can't help but be repulsed by how they act. This part reminded me a lot of The Devil's Rejects, another grindhouse style movie in which the law is shown to be often as bad as the people they are against. By the third act this started to feel more and more like a prequel to that series, Haig comes into his own, helped by some great editing and directing, such as the black and white freeze shots. Like that film also this is about family, Big Daddy doing what it takes to protect his, based on his tragic family history. 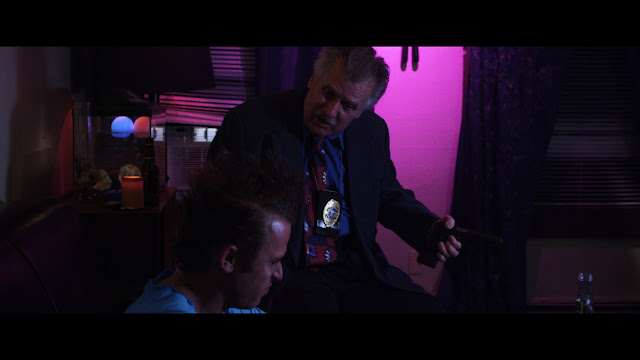 The plot itself sometimes felt a little meandering with plot threads being abandoned every now and again.  There was an interesting early focus on an undercover agent (Katrina Wolf Hill) infiltrating the family, then this ends on a cliffhanger which gets resolved much later into the movie. I liked how the viewer is made to wait to find out the resolution to that. The shift then goes into Dick investigating Big Daddy and the story strays away from discovering the cause of the contaminated weed. Intercut with all this is a DJ for a weed obsessed radio station who comments on what is happening every now and again, and for some reason is always topless! This felt similar to the DJ from The Warriors, again not a bad thing to have in a movie like this.

There isn't much nowadays that has this dizzying style of filmmaking, it is a shame, as the way the editing bleeds into the music, and the crazy splicing of scenes makes for a hypnotic watch. Without all that though High on the Hog wouldn't be half as interesting, at its core it is quite a simple and predictable story for the most part. Indican Pictures have picked up distribution rights, and on 19th April this received an initial theatrical run with a wider launch coming in the near future.