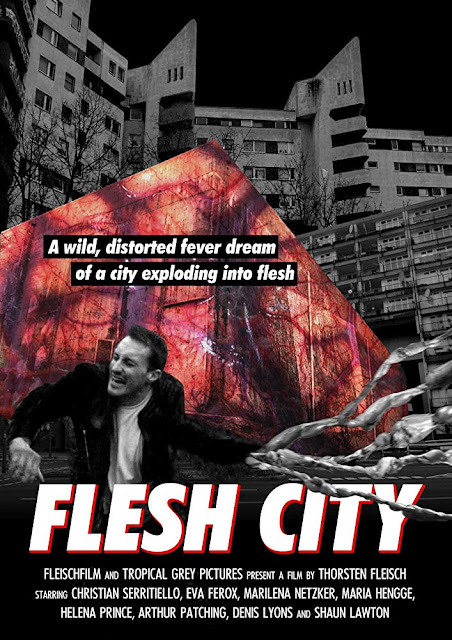 I received an email from the director and writer of Flesh City - Thorsten Fleisch whilst I was on a rare night out in town, in the process of getting very drunk, around a month back. I just loved the poster for his film and kept looking at it wondering just what sort of film this would turn out to be. My day job has been exhaustingly busy with its endless overtime and so it has taken me quite a while to get to the film. Over the course of three days I have finally managed to get the time to watch all of it, and what an experience it was! I'm not sure how this review will pan out as this is a very hard film to really talk about due to its abstract nature.

Taking place in Berlin, this follows a young man - Vyren (Christian Serritiello) who heads to a nightclub. There he befriends a young woman called Loquette (Eva Ferox) and together they head away from the crowded dance rooms and go deep into the clubs labyrinthian basement. It is down there that they are attacked by some sort of electronic insect, Loquette is abducted by a lightning man, who also performs some sort of operation on Vyren that changes his hand into a kind of fleshy tendril. Leaving the club, confused and hurt he stumbles through the Berlin streets, everything he touches with his mutated hand causes that too to mutate, changing the brutal architecture of the city into that of flesh...

I could see the near total lack of cohesive story to be something that people could get repelled by. I get the feeling this is a film that you would either hate or love. Thankfully for me sitting through this trippy experience I fell onto the loving it side. I admit straight away I have no idea what is going on here! I don't get what the aim of this was, or what any kind of metaphors the abstract images signify, but I know I found it to be engaging. There is so much going on here that I can't see how you could be bored. Through the trip you get close up visuals of large beetles, their movements making electronic sounds, you get Satanists putting on web shows, a subplot involving a avant-garde music group led by singer Womb Envy (Marilena Netzker) preparing for a show, and then the literal sight of a flesh city that felt like something from a David Firth animation.

Thematically music plays an extremely strong part here. Outside of the obvious connection of a good half of the movie taking place in a nightclub there are a fair few what are essentially music videos slotted in between scenes, that are a varied bunch. Ones such as a soft folk song that plays out over a woman getting brutally murdered as she showers, a man singing about nuclear annihilation, and more traditional scenes of bands playing. Rather than feel like odd additions, these just meld into the kaleidoscopic assortment of different scenes happening here. Most of these music videos are introduced by a man that reminded me a bit of Max Headroom, I loved his cooly bored delivery of his lines, and how certain words get distorted or repeat at different pitches. The film as a whole is full of dirty low-fi industrial music that fits the frequent cutaways to the stark, grim architecture of the city.

While this was shot in Berlin (a process that took four years with no funding or budget according to Fleisch) this is an English language film, though also features English subtitles. There was a mixing together of electronics and living tissue that gave off a David Cronenburg vibe, especially later on when fleshy tendrils attached themselves to people via their eye sockets. All sorts of effects are used here, from black and white footage, to disorientating prolonged scenes of flashing imagery. There is even a seemingly random story a man tells about aliens and demons that had the perfect accompaniment of Monty Python style cartoons playing out to show what the man's crazy story was like. Flesh City is very experimental and arthouse in how it is set out, but there is a cohesive nature to its structure that means despite being baffled by what was happening I was still enjoying the ride.

So this really isn't going to be for everyone, if the extreme end of experimental filmmaking is not your thing then it is possible your enjoyment would be muted. I really liked how varied this movie was, I loved the flowing nature to it, the integrality of the music, and the overall directing, cinematography and editing of this. This is a film to really let yourself sink into. Flesh City had its world premiere at the Insolito Fantasy Film Festival in Lima, Peru back in February. It is next due to be played at the Moviate Underground Film Festival in Harrisburg, USA later this month.

Check out the trailer below, just be aware it does contain flashing imagery...