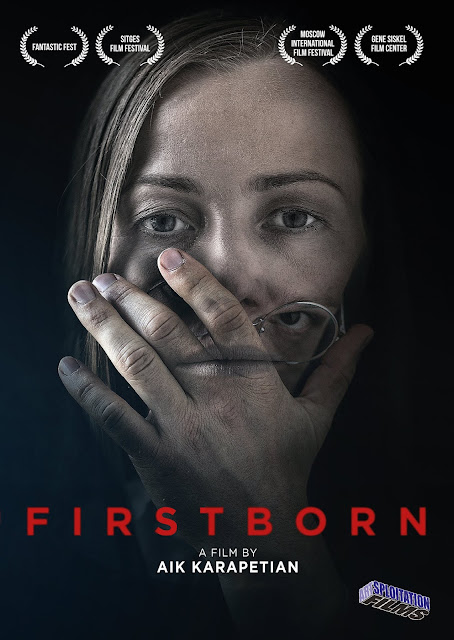 Firstborn (Pirmdzimtais) is a Latvian thriller that was written and directed by Aik Karapetian (The Man in the Orange Jacket). This is quite a slow burn of a film, in fact at times it is so slow paced that it becomes glacial. I usually find that slow films are often dripping in atmosphere, and that is certainly true with this one.

Cold, intellectual Francis (Kaspars Znotins) is trapped in a loveless marriage with flirtatious and carefree Katrina (Maija Doveika). One night while they are walking home from a friends house they are confronted by a young biker (Kaspars Zale) who assaults Francis and steals Katrina's handbag. With his pride hurt Francis sets out to find the thief on his own, so that he can be seen as the hero. Locating the thief in some remote woodland industrial ruins he attempts to bribe him into giving the stolen items back, but Francis's plan goes wrong and he ends up accidentally causing the man's death. Thinking he has gotten away with it he begins to get more and more paranoid that there is someone out there who knows what he has done. Eventually this turns out to be correct and he gets blackmailed into committing further crimes in order to protect his unborn child from retaliation for his past act. 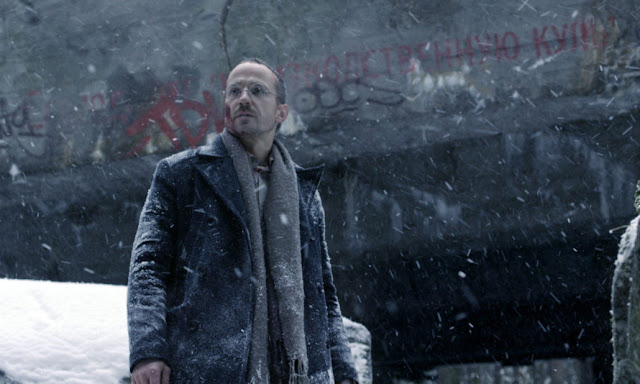 Firstborn is focussed heavily on the relationship between the two protagonists, though much more of it follows Francis who is quite the unlikable 'hero'. Throughout he comes across as weasley and a coward, with it hard to say that his actions throughout are not more for his benefit than anyone else's. A prime example is when Katrina is attacked, she calls him on his mobile begging for his help, but instead he decides to head off to find the person responsible. He is so selfishly caught up in trying to look like the hero that he fails to be there when people need him. There is bad chemistry between the central two which works great for what this is setting out to do. Francis and Katrina are polar opposites from each other and their lack of communication and trust leads up to a lot of the plot developments.

This is very slow to move in terms of the story, and it is also quite unclear what exactly is going on. Right up until the third act I was almost convinced that everything was just in Francis's head, I even began to believe his wife was fictional. Nothing really happens after the first incident. The music gets more sinister, and the atmosphere gets more dark but nothing happens. I was sat there many times frustratingly urging characters to speak so I could tell exactly what was going on. There seems to be a few pointless scenes that I'm sure were needed but I myself couldn't tell why, such as when Francis goes hunting with an old farmer he meets randomly out in the wilderness. This is in Latvian with English subtitles which often seemed to be missing parts of dialogue. I don't think they actually were though, I think it was how the script was originally written. Characters have a weird roundabout way of talking to each other that relies on assumed knowledge. This makes conversations hard to follow. 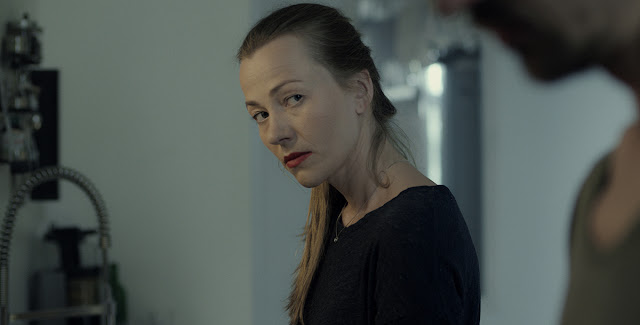 For the third act a lot more becomes clearer, at least in piecing together what exactly has been going on the whole time. Even then though there is almost a David Lynch style refusal to spell out exactly what characters motivations are. Then there are the more surreal moments in the movie, such as the giant boar creature with red glowing eyes that Francis keeps seeing at key moments in his character progression. I got the impression that a lot of my dissatisfaction came from me simply not grasping what was going on, and not really being too taken with what I could decipher.

Firstborn has great atmosphere throughout, it is dripping with an undercurrent of silent menace, and Znotins puts in a fantastic central performance that is complimented by some effective cinematography and directing. This was sometimes a bit too slow even for me, and the strange dialogue, and lack of much actually going on left me, like the snow that falls relentlessly throughout the third half, a little bit cold. Firstborn has been released on DVD and VOD via the ever reliable Artsploitation Films.