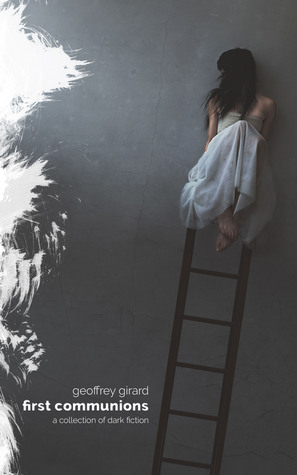 What I used to say when accepting eBooks for review is that due to a backlog it would take some time to get around to reading it, but that no matter how long it took I would eventually read it for review. I received a copy of Geoffrey Girand's horror anthology First Communions back in April...2016, my tardy self has just finished reading it, so a review is in order! I will say what I always say for book reviews - I don't review many books and so I never feel I do a good job at these, but practice makes perfect so they say.

First Communions is made up of 16 short stories, each of which has previously been published in various collections over the years. These were all well written, though some I found to be a little too abstract, or flowery in how they were crafted. Luckily for me this anthology includes a few zombie tales which are a perfect fit for my blog. So I may as well start with the zombie ones. For Restful Death I Cry gives a unique sci-fi twist to a typical undead story. Here in what seems to be a post apocalyptic world a man explores a retirement home from a previous golden age in human history, his aim is to scavenge the technology. Medical chairs in the past were used to artificially keep alive the elderly residents of these former homes, some of them are alive even up to the day the story is set. Unto The Lord A New Song takes place after zombie apocalypse has happened, the protagonist of this one discovers the son of a preacher who has created a contraption to make severed zombie heads 'sing'. That was a fun one to read. The best story in the whole book for me though was Dead In The Water that features a zombie outbreak occurring on a pirate ship. Zombies and pirates combined are not a new idea, but I found this one to be quite the entertaining read, I loved how it was paced out, and the final few sentences were great.

Then there were a few stories that tapped into the vibe of H.P Lovecraft. He remains to me to be the writer of the most legitimately terrifying stories ever written, no one has ever even come close to the soul wrenching horror of his stories. Saying that I always love a good homage to this master and there are a few here. The anthology starts off with Translatio that features a cursed writer forced to write down the words of an ancient God, the horrors he puts onto paper come to pass in real life. Psychomachia was about a mine whose miners appeared to have accidentally tunnelled all the way down to Hell itself. These same miners then get possessed, or changed by the experience, this reminded me of the ghouls from horror comedy Peelers. This was all told in a roundabout way long after the events had occurred. If I recall rightly it ends with a bit of a needless twist end. Release Me is the one most inspired by H.P Lovecraft, Girand even states this saying he tried to write the most Lovecraftian story he could. In this one a cursed house on top of a hill is home to a literal sleeping giant contained within the basement, great stuff!

First Communions is also home to a few stories that either left me feeling a bit cold about, or just straight up confused me due to the bizarre nature of what they were telling. Collecting James is something about collecting bone chips from talented peoples skulls in order to relive their memories? It lost me a bit, was weird! Universal Adapter is an even more odd one that I couldn't follow, it seemed to be a sci-fi tale about a future where entertainment is banned and people are put into special pods to have their ideas of entertainment tortured out of them? Where The Shadow Ended is about a Victorian chimney sweeper stuck in a chimney with a monster. This was very bloody and gruesome, but also strangely uneventful considering the great set-up. The final two oddities were Crawl, which was about a boy hunting tarantulas, but having the twist of not really being a horror, and titular story First Communions. In this final story a girl convinces a boy what the real meaning of love and worship is, but was a bit too flowery for me to really enjoy.

As for the rest of the ones here. Dark Harvest has a fallen dark angel nursed back to life by scared peasants in medieval times, a good one. Not Fade Away has a young nurse discover a plot by the inhabitants of a nursing home to kill themselves. Misdirection is an interesting comparison between magic and science that is about real life magician Robert Houdin and his fictional meeting with a Middle Eastern magic student. Finally are two school based ones. What You Know features an English teacher whose students twisted short stories all come to life one fateful night. This was kind of like the Goosebumps movie, though this one is far more adult horror. H.E Double Hockey Sticks is the sole comedy story of the collection, and works very well. A boy suspects that twin brothers on his school's hockey team are secretly demons. This one reminded me a lot of the style of Robert Rankin, Girand is good at surreal humour it turns out.

While I didn't rate everything contained within First Communions there was enough here that I did actually enjoy reading. As I always say with anthologies, there is usually at least a few worth the time to read and that is the case here, even if I found the more straightforwardly written shorts to be the most entertaining to me. First Communions is out now, well, it has been for the past three years, so pick it up if any of this sounds like your thing.