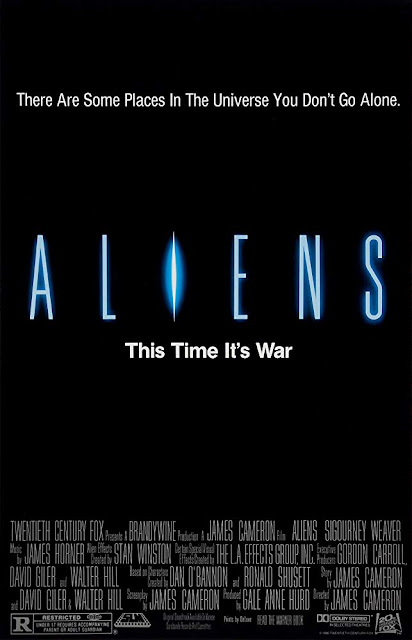 Originally I had intended to play the video game Alien: Isolation following on from watching Alien the other week, due to that taking place as its own sequel to the original film. Last night however I found myself with an urge to carry on with the series and so for the third time only I sat down to watch director James Cameron's Oscar award winning Aliens (Cameron of course known for such greats as The Terminator and, Terminator 2: Judgement Day). I first saw this in the mid 90's and happened to see the 1990's director's cut. A few years later I got the box set of the first four Alien films and watching the theatrical release version I was disappointed to see some of my favourite moments were gone. Now nearly two decades later I have again returned to this film, once again opting to watch the director's cut of the film.

Over fifty years after Ripley (Sigourney Weaver - Alien, Ghostbusters) escaped her doomed space merchant vessel in an escape vessel, it is finally discovered. She is awoken from cryo-sleep and explains her actions to her bosses at the company she works for. However her story is deemed too unbelievable and she is stripped of her work licence and suspended. Ripley then learns that the moon in which her and her team first encountered the eggs that lead to so much misery has in the past fifty years become inhabited by a space colony. After losing contact with this group her former employees decide to send in a team of colonial marines to investigate. Fearing for the safety of the colonists, as well as with the promise of getting her old job back she agrees to go with the marines to act as a consultant on the alien menace. However upon arriving things quickly go downhill, this time around rather than just facing the one xenomorph there is a whole army of the creatures to face... 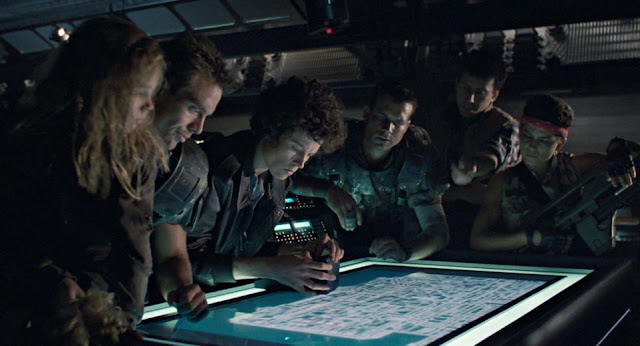 Aliens eschews the slow paced survival horror of the original for something that is far more action packed. The first third or so is tense, and it does take a while for the threat to become known, but from this point onwards this is much more action horror with many of the scenes fast paced with lots and lots of guns and aliens. Immediately impressive was the set design, that like the original stands out as iconic. While there are a lot of models used here for establishing shots it all looks really good even now. The only noticeable elements that don't work as well are scenes involving the transport ship that sits uneasily against the backgrounds it's been superimposed onto. The director's cut features seventeen minutes of additional footage which helps to flesh out characters more, as well as provides additional scenes of xenomorphs attacking. This extra footage all fits in well and adds some meat onto the bones of the action here.

Alien was about Ripley on her own having to battle a single creature. Here with the cast greatly expanded, and with the xenomorphs expanded it should be less scary. While this isn't a film that will give anyone nightmares I felt the multiplied threat helped make things seem more desperate. One of my favourite parts of the zombie genre is the sieges characters get caught up in, one of the best moments in Aliens is a prolonged siege that is made all the better by the iconic pulse scanner. This scanner is at the heart of most of the suspense scenes, having a device that shows you the proximity of the enemy, but not where exactly they are makes for some dramatic scenes. The iconic 'beep' is used almost (but not quite) to overkill. The special effects and the makeup effects here are just great, even all these years later they look fantastic. The way the xenomorphs get ripped apart when they are shot up, the sprays of acid, gunfire, and explosions all look so damn good. A big complaint of Alien was that the titular creature does look like a man in a suit, here the creatures seem much more insectoid. Facehuggers are in more abundance here and again look amazing, their starring part in a scene set in a med bay was one of the highlights of this. Meanwhile the introduction of a Queen alien is very well done, the creature design is phenomenal. 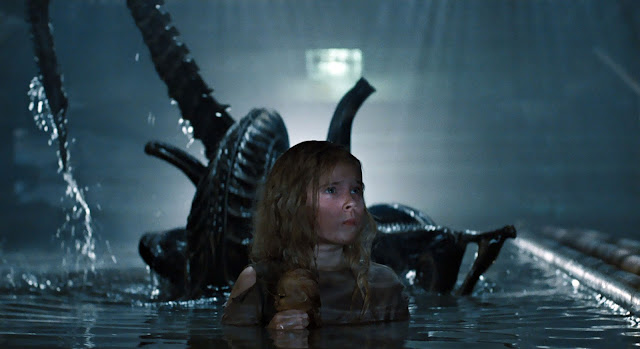 The core of this films story is the relationship between Ripley and the young Newt (Carrie Henn in her only acting role). It becomes very much about Ripley wanting to protect this innocent with much of the plot revolving around trying to save the girl from danger. The girl wasn't bad but I found her constant screaming to be a bit irritating on the ears! As for the rest of the cast Lance Henriksen is very good as the android Bishop, maybe his most memorable role ever. The soldiers may be all one dimensional but they set the standard for these types of over confident marines who show up in every action sci-fi film ever since. Bill Paxton (Predator 2) as the cowardly Hudson, Jenette Goldstein (Near Dark) as strong woman Vasquez, Al Matthews (The Fifth Element) as Sergeant Apone, and Michael Biehn (the video game Far Cry 3: Blood Dragon) as Hicks are such memorable characters. This is all helped by the very iconic script which gave birth to a whole host of stone cold classic lines such as "That's it, man. Game over man. Game over!", "They're coming outta the goddamn walls!", and "Get away from her, you b*tch!" to name just a few. To be honest though about half the lines spoken in this classic are ultra memorable, even someone like me who hasn't seen this much was surprised how much of this I recognised.

In terms of the general feeling this is a far different film than Alien. It ramps everything up to eleven and jams as much action into the 2 hour 37 minute film. It manages this without it ever becoming dull, though on occasion it felt like it could have done with a breather from the constant fighting, even if plot wise there isn't much room for that to have happened. While I appreciated more than loved the original, with this sequel I both appreciated and loved what I was watching. There is just no denying that this remains just as good as it always has been, another essential watch.