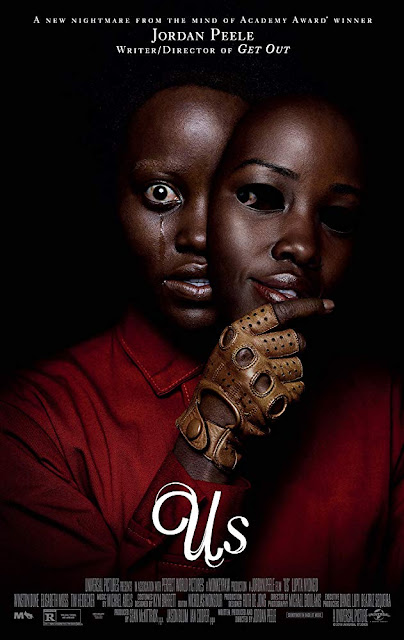 I can say with some certainty that Us was a horror film I had been looking forward to seeing. It is after all the next film from Jordan Peele, he of Get Out fame. I really liked the idea behind Us, though it did suffer a little from the same issue I had of his previous film. Again this is very much a social commentary, though where his first film seemed to be about racism, here it seems to be more looking at the class divide in America.

Adelaide Wilson (Lupita Nyong'o - Black Panther), her husband Gabe (Winston Duke - Black Panther), and their two children, Zora and Jason have headed to their holiday home in Santa Cruz for a getaway. Adelaide is nervous about the trip due to a traumatic incident that took place in a hall of mirrors by the beach there as a child. Her nerves seem warranted as the first night at their home they are confronted by four mysterious people who break in and hold them hostage. The family are horrified to discover the intruders are dopplegangers, twisted versions of themselves who plan to torment and kill them for reasons unknown.. 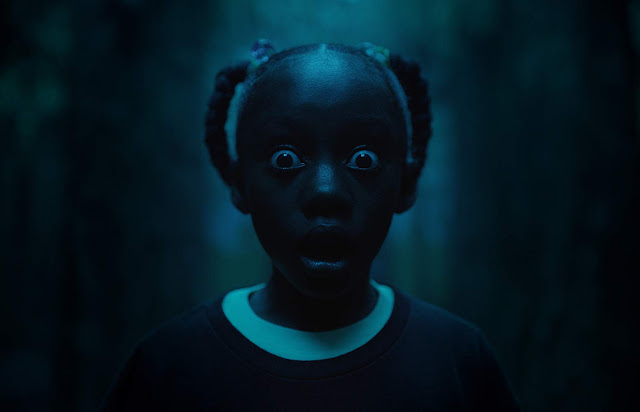 Purely based on Peele's previous film, and the fact the main characters are a black family I assumed this would be looking at issues of race. It turns out however that the skin colour of the characters is not really a factor at all this time around, they seem like a relatively wealthy middle class group, the people out to get them brought to mind H.G Wells 'Morlocks' from The Time Machine - uneducated, brutish, poor rising up against those above them. Based on the trailer this seemed like it would follow the path of a home invasion horror, yet this turns into something far more than that, mixing in elements that wouldn't be out of place in the zombie genre. Some street scenes seemed very apocalyptic in how they were set out.

Having doppelgangers as the antagonists was something that I imagined would work well, as it is an interesting concept. It has been done before, but rarely on such a deeply personal level as is shown here. The initial meeting of the two families left the movie rife for possibilities, I had expected some pretty dark moments. There is a lot of murder in the film, but to balance that out there is also a lot of humour injected here. One of my complaints with Get Out was that the comedic elements sometimes seemed a bit too apparent, I mean there was a subplot there that was pretty much comedy throughout. Here there are again plenty of jokes, from the dialogue, to actions characters take, and on occasion it does distract a bit from the horror. Especially in the second half where there were some parts which lost impact due to film never being more than five minutes away from the next funny comment. Saying that Us can be amusing at times, it is just a bit over done. 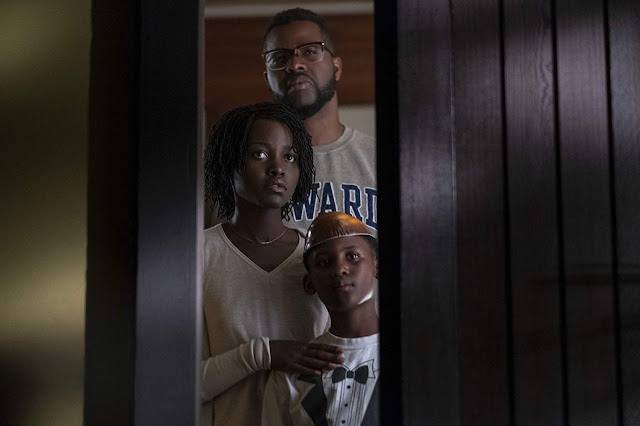 The acting throughout was impressive, especially considering that the same actors portray both the protagonists and the antagonists, dual roles that each achieved wonderfully. The doppelgangers are mostly mute, only able to grunt and squeal. Due to this there are often long stretches were events play out in near silence with just the music and sound effects to fill the space. I loved how these sequences were set out, each character in battle with their opposite, sometimes, such as the final battle these sequences played out almost like some kind of twisted dance, the twined effect leading to characters being able to predict the movement of their counterpart, and in the case of Jason even able to influence his evil twin to copy what he does. The tethered (as they are called in the film) look and act insane which adds to the unsettling feeling they bring. Pluto (Jason's double) crawls around on all fours like an animal, Umbrae (Zora's twin) has a permanent deranged smile on her face, and Abraham (Gabe's twin) is a huge wall of violence. Alongside the main cast there was also a small but decent supply of side characters, favourite of mine being Tim Heidecker (of Tim and Eric fame) who plays Wade's friend Josh.

This is a very weird film, I wasn't quite prepared for how off kilter this was, as opposed to being straight horror. The unified look of the tethered in their red jumpsuits, single gloved hand, and all brandishing giant pairs of scissors gave them a distinctive look, and it creates some extremely surreal moments. It was a surprise to see this didn't just take place over one night, but has the horror spread well into daylight as well. The home invasion angle being wrapped up by around the films halfway point was unexpected, it left me with no idea where it would go to. There is an explanation giving for just how the tethered came to be, some might say too much of an explanation. It certainly gives you something to think about, and in my case gave me more questions than answers, it hurts my brain just thinking about it! It is all held together by fantastic cinematography, and some great directing. I loved how light and shadow was used here, and how much detail of what the film is about is hidden in plain sight, locations peppered with detail that will make repeated viewings a joy. From the joyous prologue that takes place in a nostalgic representation of the 1980's, all the way up to the final dazzling shot this is a beautiful looking film with a great soundtrack that often the characters themselves can also hear.

Us is a movie that is a worthy follow up to Get Out, it proves beyond a shadow of a doubt that Jordan Peele isn't a one hit wonder, but instead someone to definitely keep an eye on. The mixture of horror and social commentary works so well, while the pure attention to detail, the nods to films that have inspired him, and the choice of actors bring together something that while not as creepy as I had hoped was still a damn memorable fresh feeling horror.