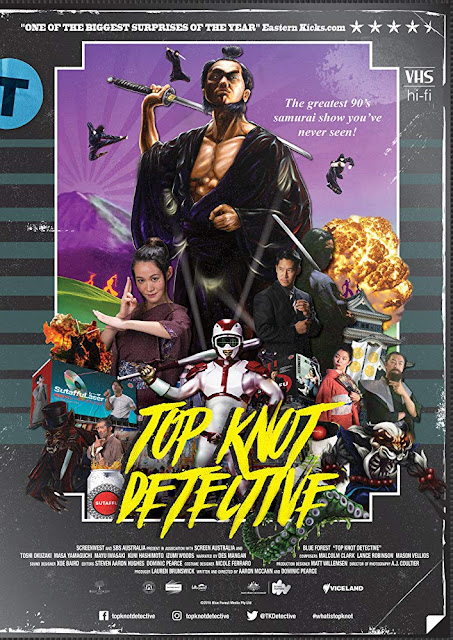 I'm hoping this blissful four day Easter weekend will allow me to gain ground somewhat on the many blog posts I need to do on this humble blog, especially as my day job has been so busy that it has left me too tired to be blogging in the evenings lately. Top Knot Detective (written and directed by Aaron McCann and Dominic Pearce) isn't a horror, it is a comedy mockumentary about a fictional TV show that if real would have been something I would have loved to cover here.

The documentary is about an obscure cult Japanese Samurai/Detective series from the early 1990's called Ronin Suiri Tentai which came to be known as Top Knot Detective in Australia. In the show a Samurai detective - Sheimasu Tantai becomes a Ronin and sets out on a path of vengeance to find the man responsible for the death of his master. The documentary charts how this show came to be, as well as follow the history of the man who played the main character - Takashi Takamoto (Toshi Okuzaki). It follows the events that led to the cancellation of the series, and the downfall of Takamoto. 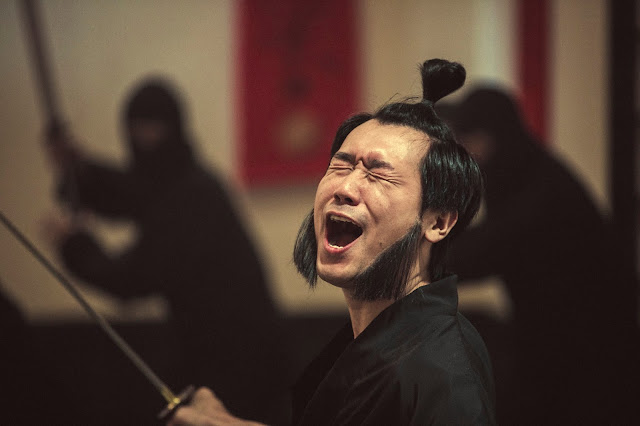 Top Knot Detective does for Japanese Samurai shows what Garth Merenghi's Darkplace did for horror shows. Both have a documentary format and focus on shows that look absolutely terrible and which star a lead actor who is completely deluded as to the quality of what he is working on. It is important that the show itself is something that is so bad it's good and that is the case here. The overriding thought watching this was just how much I wish Top Knot Detective actually existed, it looks amazingly awful. That show itself is represented so well here, the rubbish special effects, the abysmal acting, and the editing and pacing combine for something so compelling. The story of a man on a path for revenge was something that I would love to see, and could really imagine working well as a show! Being based around the creation of this show it isn't so much like Darkplace which centered on individual episodes, but from the start to the end we get to see the evolving story which leads to some satisfying resolution for that part of this film.

The other half of this is the interviews, archive footage, as well as the investigation into just what went wrong. To begin with I felt this part was actually getting in the way of the crazy low budget master piece of the spoof show, but as the hour and a half film went on the behind the scenes story got more and more involving, with sex, drugs and murder all playing a part. I became quite involved with both the on screen and off screen stuff going on. The documentary becomes something I was surprised to find was quite bitter sweet and sad with some good revelations and outcomes. Much of this is in Japanese with subtitles which helps lend this a feeling of authenticity, though the humorous nature means it isn't something you could mistake for real, It was a nice touch that there are parts filmed at comic conventions featuring people talking about their fond memories of Top Knot Detective, and there are some fun cameos such as Guitar Wolf (Wild Zero) showing up at one point! 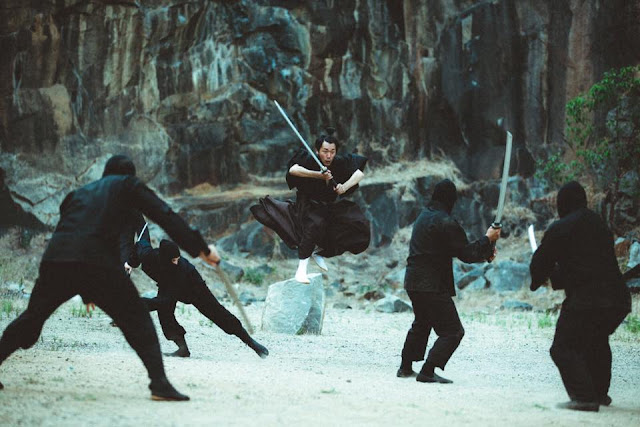 The special effects in the show can be very bloody with faces getting caved in, decapitations, geysers of blood, and even child death. It is all done in such a silly way though that it was a joy to watch. Dummies being thrown off cliffs, very fake looking people getting killed, characters heads getting superimposed on other peoples bodies and explosions all add to the carnage. The many fight sequences though do actually look really fun, lots of sword fights, and even time travel thanks to a later cross other with another fake show called Timestryker. The acting I enjoyed due to the dual roles a lot of the actors did, mainly with Okuzaki whose deluded self confidence was hilarious, as well as Masa Yamaguchi who played the role of Haruto Kioke, who himself played the role of the antagonist Kurosaki Itto within the show.

I enjoyed my time with Top Knot Detective, though it was certainly something that got a lot better in the second half, the first part was much more slow going in terms of how the documentary part plays out. The format has been done before, and it does follow a slightly predictable path but this was something that was not a waste of time to watch. I just wish the fictional Ronin Suiri Tentai actually existed, I would be so up for watching that! The collector's edition of Top Knot Detective was released on 18th March with a dual format Blu-Ray and DVD, and was also released as VOD on many services including iTunes and Amazon thanks to Third Window Films.

Posted by Daniel Simmonds at 12:24