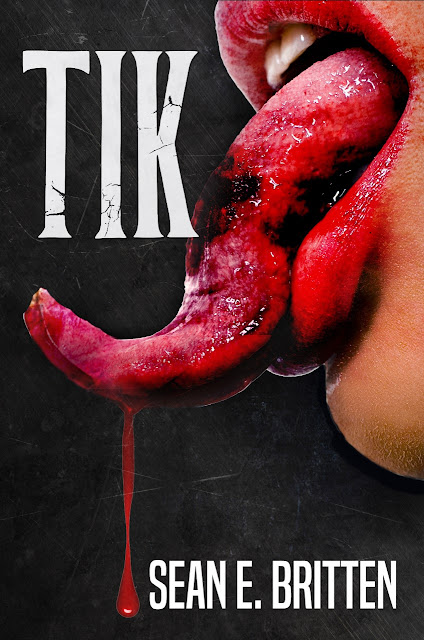 Well, I surprised myself with Tik, for such a slow reader such as myself I actually got through the whole novel in just over two weeks. I'm hoping that relative turnaround speed is a turning point in my eBook reading as I have a large digital pile of books dating back to 2012 still waiting to be read for review! Tik is the latest book from indie horror author Sean E. Britten (Kill Switch, Screamers). I have yet to read a bad book from Britten, and thankfully after having read this I can still say that is the case.

American students Hunter, Elly, Oliver, Cathy and Mia have gone on spring break to Mexico, mostly to party. Wanting to get at least a little bit of culture they decide to travel away from the coastal party towns to visit some remote Mayan ruins inland, Australian backpackers Jake and Ian decide to tag along. The plan after going to the ruins is to stay overnight at a small secluded town called Macondo, and then travel back to the coast the next day. However the town they choose to stay at has an unsettling atmosphere, and is populated by creepy looking skinny inhabitants who uniformly have bloodshot eyes, and a strange manner to them. Soon after leaving the town the next day their hire cars both break down unexpectedly and they are forced to return to Macondo get assistance. It turns out the entire population are actually vampiric like creatures who feed on unsuspecting tourists such as Hunter and his friends...

Tik initially seemed to me like a teen horror from the early 2000's converted into a book. It seemed like it was going to be about dumb teens with plenty of sex and drugs thrown into the mix, something that really doesn't appeal. It felt like the story here started a few days too early, it is a good twenty percent of the way into the story (excluding the violent prologue) that it really gets going. The parts before that take place at the partying coastal town where a wild contrast to where this went. This was likely a purposeful contrast but I felt there was nothing that really occurred in those first few chapters that couldn't have been talked about via some exposition from the main characters. Once the characters reach Macondo though Tik really steps up a gear and gets into a real page turner, thankfully leaving the party atmosphere behind and moving into horror territory.

I had first assumed this was going to be dealing with vampires, but the creatures here are a lot different, and more interesting than that over explored creature. The creatures here are aswang, which are creatures that originate from Filipino folklore. I'm not that clued up to what they are like in established folklore, but here they are almost insect like in how they act, yet they are able to pass themselves off as human. There is a hive like sensibility to them, with them being led by a head aswang that the group finds out is called Mama. The aswang in Tik feed on their victims via a fleshy needle that grows out the back of their mouth, and is stabbed into people to drain their blood. These creatures bodies are pretty weak, with their bodies being very easy to destroy, but the power comes from their sheer numbers and their surprising physical strength. There is also some supernatural element to them in that they are able to somehow hide behind the narrowest object, and they barely feel pain. This gave Tik a fresh feel to it, I loved the idea of a town full of these creatures hiding in plain sight. Add to that the natural alienation that comes from these English speaking people being in a country where that's not the main language and it leads to something that makes the situation even more oppressive. It is easy to mistake the creepy atmosphere of Macondo just being down to the protagonists being outsiders. I was reminded of the video game Resident Evil 4 with Leon Kennedy in that game getting deep into a village of Las Plagas infected humans before truly realising he had walked right into the Lion's den.

There is no creeping dread here, instead this is a story that is full of action, the characters early on getting access to weapons, and soon discovering just how physically weak the bodies of the aggressors are. It makes for some exciting battles that are constantly varied up. There is no end of extreme violence with no end of body parts getting broken and severed. There are also plenty of sieges that always seem to feature in Britten's stories. Here the siege scenes seemed more claustrophobic than usual which was quite welcome. With all the violence there is also a large amount of swearing, mostly from the Australian characters, it's fitting for the characters, especially due to the situation they find themselves in, I liked that even the descriptions for actions happening sometimes feature swearing too. While I felt there was too much use of the word 'aswang' (and a slightly too convenient explanation for why the protagonists recognise the creatures as these) this was a well written book that was such an easy and enjoyable read. It is certainly the first time I have ever read a description for what it is like to be hit by a thrown severed head. Also the first time I have ever seen a reference to the classic Australian bizarro kids show Round the Twist!

The story flowed naturally, and with two separate situations going on (the characters split into two groups early on) led to some good variation. This is all fun in a horror movie type of way with there always being a bit of humour to keep things from getting too bleak, mainly from the way characters talk "It's like a f*cking clown car, they were all packed in one stall!" is one such line that just made me burst out laughing. The story follows a mostly predictable enough path, but that isn't to say it ever becomes dull, instead having an idea of where events will go leads to nice expectation. The stakes getting higher when the sun goes down helped keep the suspense going (again going back to video games it made me think of Dead Rising where the zombies get stronger at night). The feeling of being trapped in a foreign town, being hunted by the monstrous townsfolk was so well described, throughout I could picture what I was reading so vividly in my mind.

Tik is yet another great horror book by Britten, I had a blast reading this. The setting, as well as the particular type of creature faced made this feel fresh, and the clear descriptive way this was written meant it was easy to get drawn in. If you have yet to read any of Britten's work Tik is a great place to start.

Posted by Daniel Simmonds at 13:50