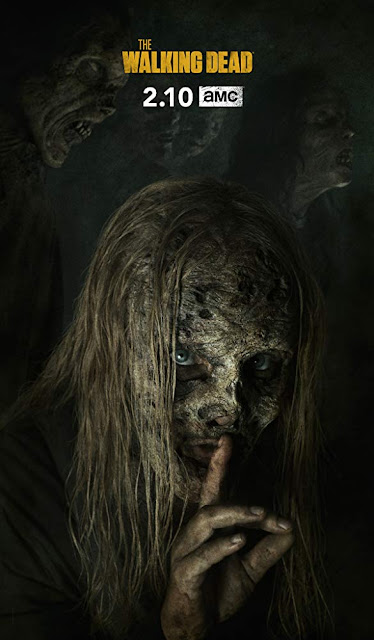 I will start off my review of the latest season of The Walking Dead to state once again how I just do not understand people who say it has gotten terrible. Half the time it seems the people saying this are the same ones who admit to not even having watched it for years and years and years. The Walking Dead is my favourite TV show and I make no apologies for how much I love it, despite the constant issues I have with how it all plays out. I felt season 9 could be a difficult one, it was already revealed one of the main actors was going to be leaving the show, while taking place after the end of the Saviours story arc meant the biggest threat was now gone. Some great decisions moved the story along in a way that I did not expect though. Spoilers for previous seasons, as well as minor spoilers for this season to follow!

So season 9 of The Walking Dead takes place over two different time periods. Initially we follow Rick (Andrew Lincoln) as he attempts to keep together the disparate groups of Hilltop, Oceanside, The Kingdom, New Alexandria, and the now neutral Sanctuary. Trying to create Carl Poppa's dream of a united society is harder than expected though, especially when some people hold violent grudges. Then not even halfway through the season there is a time jump of six years. During that time leap all the different settlements have retreated into themselves and became distant from each other. However the arrival of a new group of creepy zombie skin wearing foes known as The Whisperers, led by the cold hearted Alpha (Samantha Morton) means that once again everyone must put aside their differences to come together. 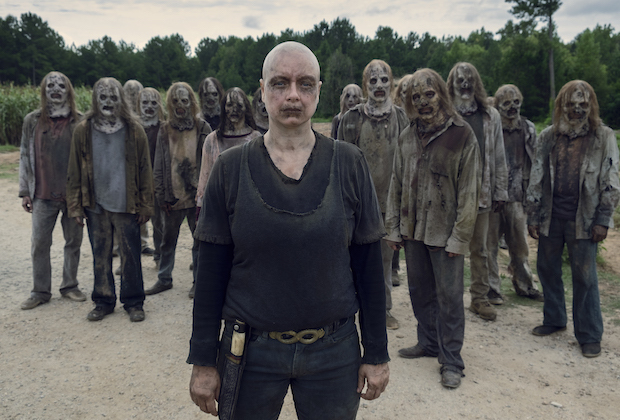 Going into this I knew a key character was going to leave, I wondered how on earth the show could manage to keep going with such an integral person gone. The time jump turns out to be the perfect solution to that problem with so much changing, and so many new characters appearing that it doesn't matter too much that that particular character has gone. Over the seasons as the cast got larger and larger there was a reduction in the core casts individual screen time, and now it sits at a point where there isn't really anyone I would say is the main character. Initially the second third of the show deals with a group of new characters who looked they walked right in off the set of Fear the Walking Dead. I mean by this that they seem B-list compared to the built up characters. By the end of the season though, while I could not tell you a single name of any of the five strong group I felt they were well on their way to settling into the show. They include among them a deaf and mute girl which was someone who really felt like a great addition. One scene involving her in a cornfield being pursued by zombies really stood out due to the sound being muffled to reflect what she herself could hear. It made for a very disorientating and claustrophobic sequence.

As is always the case now, the long serving cast members have their screen time drastically cut down, with previously minor characters pushed into the limelight. Ezekiel (Khary Payton) and Carol (Melissa McBride) spend much of the season in light hearted sub plots. I mean Walking Dead style light heartedness, such as them under siege in a cinema while looking for a new bulb for their projector, or confronting a band of criminals calling themselves The Highwaymen that style themselves on Spaghetti Western cowboys. New Alexandria also didn't seem to have as much focus on it this season. Due to a past event that remains a mystery until episode fourteens Scars, Michonne (Danai Gurira) is very distrustful of outsiders. The show often goes there to follow Negan (Jeffrey Dean Morgan) who is still in prison there, but has formed a bond with Judith who now approaching double digits is a great character who reminds me a lot of Carl Poppa, a new favourite character thanks to the actresses performance. Negan himself doesn't get much screen time but it is a joy seeing how he has mellowed over time, while still being full of hilarious lines. 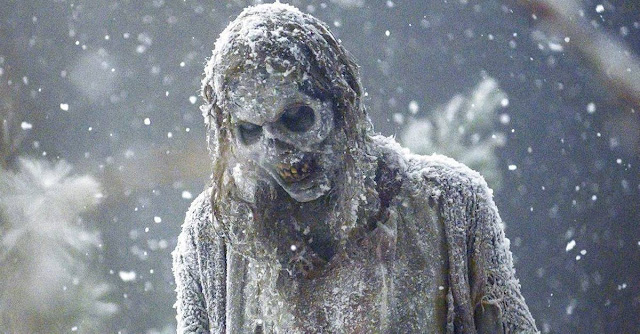 So Hilltop is the primary focus here, though with Lauren Cohan leaving the show it is down to the unremarkable Tara to lead that place along with Jesus. Daryl has been pushed to the forefront a bit more, but it is Henry who has been pushed right to the front. This often felt like a weird decision due to how inexperienced his character is. Me and my best friend (who I watch the show with) always refer to the background characters as 'no-skins', though I guess a more relatable description would be 'red shirts'. These are always ones who seem only to appear to then get killed off in lieu of one of the core cast members. Henry feels like a no-skin who has been pushed into the limelight, and so it felt weird having so much of the story centre on him. The main story of this season is the arrival of The Whisperers, and most of what occurs is due to Henry and his idealistic ways leading into various situations such as abductions, stand offs and missing people.

This season is all about playing with your perception of time, aside from the most obvious one of the time jump at several points there are leaps of weeks if not months occurring. This cuts out the chaff a bit and helps move the story along where otherwise it would get bogged down in dealing with characters emotions. A few episodes have flashbacks mixed in to reveal how the past has impacted the present. Such as Scars already mentioned, but also a great part that took place in the initial days following all out zombie apocalypse. It was great getting another glimpse into this earlier time.  Events were ramping up and I fully expected a bleak season finale due to things being relatively peaceful. The bite occurs earlier than expected which leads to finale The Storm feeling more like an epilogue than a season ender. This final episode took place in the middle of winter, which gave some fresh new ideas for the undead, such as them being frozen in place, or bursting out of snow drifts. 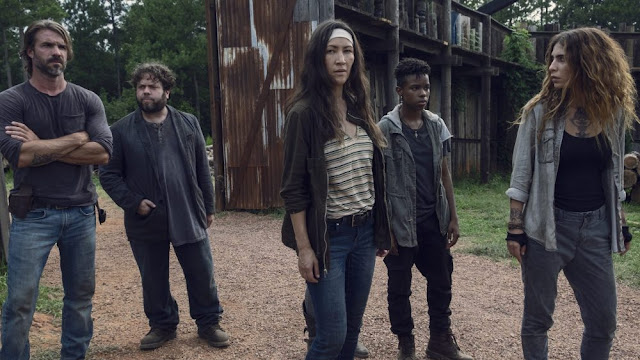 The undead look more and more unnatural and there are plenty of great sequences of them fighting the survivors. These often get quite violent with no end of ghouls getting sliced up. The Whisperers get a great introduction at a graveyard, being disguised as zombies give them a unique feel to the various other evil groups faced by the protagonists over the many seasons. Alpha is a bad person but there so far isn't the fear that Negan brought with him, these are far more creepy than scary, and feel more comic book like, especially Alpha's number two whose hulking frame made him feel like a villain from the James Bond series (the impossibly strong henchmen archetype). While some of the core characters do get killed here overall there seemed a much reduced death count for the heroes, something I did not actually mind.

By jumping into the future The Walking Dead season 9 manages to get past the fact the protagonist is no longer in the show. The addition of new blood into the show means that while the cast has gotten bloated there are enough interesting people here that I am still invested in this. It will as always be interesting to see where the show goes next, and as always I can't wait for the new season. Not many shows can run for this long and still remain as involving and addictive as this has.