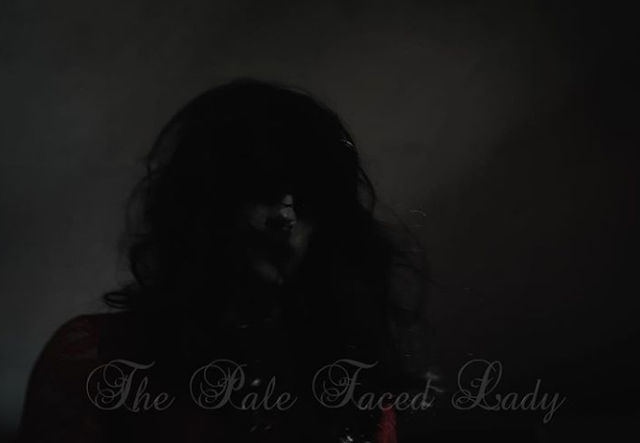 The Pale Faced Lady is a new short horror film from Jeff Payne (Michael Myers Versus Jason Vorhees) that takes place entirely as a narrated story. It reminded me a bit of Creepypastas in how it was set out. It was actually based on reality in a way, in that the idea came about due to a recurring nightmare about a ghostly woman Payne had while staying in an apartment.

A girl tells the story of how she came to be living in an old house that was inhabited by the ghost of a pale faced lady. Due to her young age her parents didn't believe her, the ghost sightings ramp up until tragedy strikes.

This was written, directed, and edited by Payne, his editing work on the amazing septeMber and octOber was impressive enough that I didn't think that aspect would suffer at all here. The story is a classic one, and that was the vibe going for in this desaturated ten minute short. It was full of traditional haunted house imagery such as dolls and creepy looking rooms. The stand out part was the lady herself, she is used sparingly enough but always looks freaky, especially the part when it shows her with a twisted grin looking out from an upstairs window.

The story itself was traditional and this did detract from the impact it had, there weren't any surprises even if it was told well. The directing was one area that never fully satisfied, there were one too many long shots of the camera rotating in place around a room, especially towards the end of this it started to make me feel a little queasy with all the spinning. This did have some great end credits though, the credits written on burnt up paper that then reformed in reverse looked great.

The Pale Faced Lady is a short made with the quality you would expect of Payne, especially with the editing. As a homage to classic ghost stories it did what it set out to do, though by doing this there wasn't really any surprises to be found.  This can be seen for free on YouTube so I will include it below for you to check out for yourself.