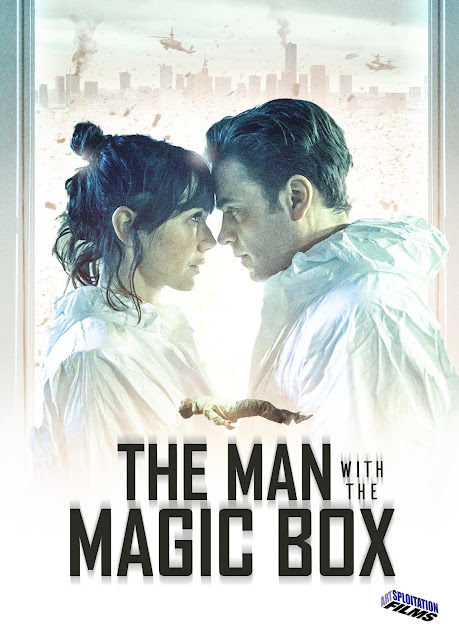 Polish sci-fi film The Man with the Magic Box (original title Czlowiek z magicznym pudelkiem) isn't a horror, yet it has attached to it elements that I do quite like and find it hard to pass up on when offered for review. This features both a dystopian future, as well as time travel, both things I enjoy seeing.

The story begins with Adam (Piotr Polak) being given a new identity and a new job as a janitor in Warsaw 2030. He is a bit of a misfit and seems out of place in this future world that has elements of 1984 to it. In the office block where he works he forms an attraction with Gloria (Olga Boladz) and the two start an unlikely relationships of sorts. Meanwhile Adam has discovered a strange radio in the old apartment building he is living in, one that it is suggested could be a conduit to allow him to travel back through time to the 1950's. 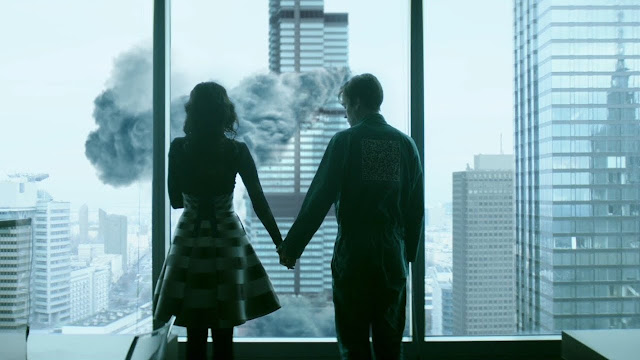 The look of the near future Warsaw is very well done, streets are murky and filled with dusty ruins, offices are sparsely decorated and the future technology is very minimalist. Drones fly overhead, VR is a common thing, computers are holograms, there are frequent power cuts, and water is rationed. All old technology has been banned in this future state, while it seems an ongoing war is happening. This was all brought together to create a different sort of future to the usual neon signs everywhere in films such as Blade Runner. There was also a nice line in future clothing that really stands out as something unusual, glowing shoes, strangely coloured clothing is unified throughout to really make the old fashioned garments that Adam and later Gloria take to wearing stand out.

While this is in Polish with English subtitles I felt the acting all seemed of a high standard, especially with Polak and Boladz. As to the character of Adam though there really didn't seem much to him that was revealed. It was almost frustrating at times that he seemed like a mystery, the movie starts (outside of the prologue that has Gloria after the events of the main movie being told she is getting her memory wiped) with Adam arriving in Warsaw, but no explanation of where he has come from. It is up to the viewer to make up their mind if he was a time traveller, or if he became one, though with elements that reminded me of H.G Wells The Time Machine I think it becomes obvious enough. Gloria was a better character, though for both of them there is a mystery that means they become a little less interesting than I felt they should be. Stand out actor was Sebastian Stankiewicz who plays Adam's simple minded janitor friend Sebastian. He did so much with a character that really doesn't have that many lines, yet his silent moments really breathe life into this interesting person. 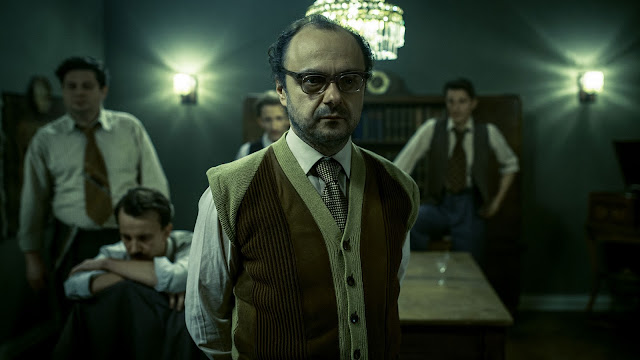 The plot is sometimes obtuse to the point of bafflement with some parts that never seem to get explained. There are hints that lead to a general outline of the time travel part, but other elements such as the secret threat monitoring Adam are never really explained. It makes for some paranoia (which is where some of the 1984 themes play in), but there is a Brazil like humour to these parts as well with the people after him being slightly incompetent in their actions. The time travel itself is quite abstract with there not really being a solid explanation given. I didn't actually mind that this wasn't explicitly explained, sometimes the air of mystery around parts of The Man with the Magic Box helped it.

This has some great set design, some great costume design, and a score that fits the tone perfectly. The plot itself I didn't find to be all that involving. It is mainly a love story, but that was the biggest part for me that I didn't really enjoy too much. With the characters being such blank slates it was hard to care much about them slowly falling in love with each other. For me it was the world building that I really liked, this bleak and darkly humorous dystopian future Warsaw felt well realised and well thought out. The Man with the Magic Box was released by Artsploitation Films on DVD and VOD on April 4th.