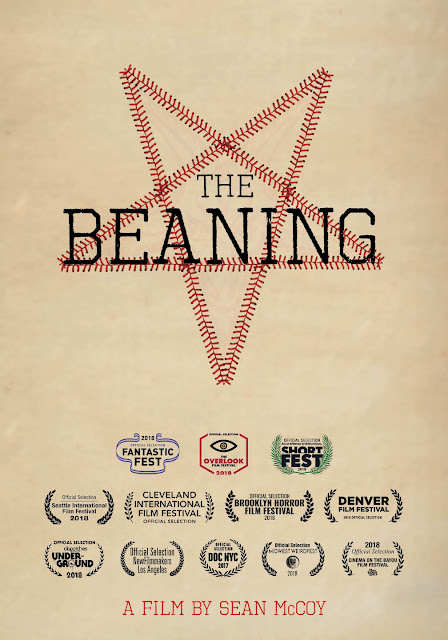 Featuring content such as The Gaze and The Outer Darkness the online 'premium horror entertainment brand' ALTER really is becoming something that is becoming associated with quality in my mind. Towards the end of March experimental documentary The Beaning was released on the service.

This nine minute documentary directed by Sean McCoy looks at the theory that the accidental killing of Cleveland Indians baseball player Ray Chapman in 1920 by a fastball thrown by Carl Mays was in fact part of an occult ritual that propelled the New York Yankees to super stardom. What it lacks in specific details it makes up for in the experimental art house style it is set out with. There is archival footage mixed in with horror film footage from the time, of witches and devils, which coupled with the droning sinister soundtrack creates a feeling of unease about the whole thing.

Experimental always seems to work better with more grainy and old footage so this is a good combination of the two. I liked how the two elements were mixed, such as an old fashioned giant devil superimposed over the ground of a baseball stadium. It isn't all recycled stuff though, there are some newly filmed sequences that fitted right in with the tone, especially the sequence featuring Tillinghast Huston and Jacob Ruppert drinking, smoking and laughing together in a smoke filled room as they morph into classic versions of devils. The over the top facial expressions of the actors in these recreations were entertaining to watch.

The theory put forth is not very believable due to not too much evidence but that doesn't take away how interesting this was. This has obviously been made as horror, and with the reality of the actual 'beaning' having occurred I found it quite interesting for the few bits of information it contains. As with a lot of experimental films this has been edited together in quite a beautiful, captivating way. The Beaning is a perfect fit for the type of content ALTER puts out, it is worth a watch, so I shall include it below for you to check out for yourself.