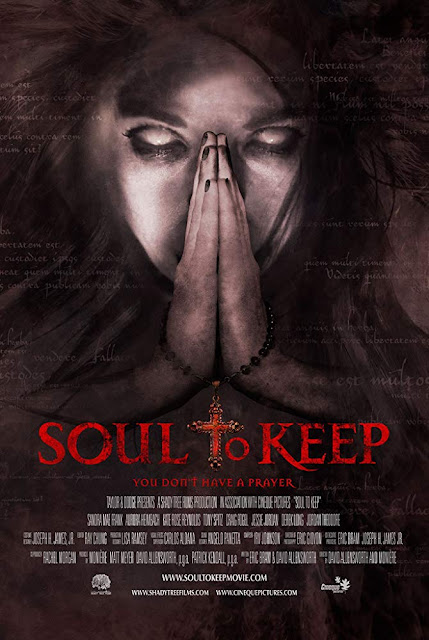 I had planned to watch Soul to Keep for review last night, but a combination of being extremely hungover and wrongly thinking it was a short film led to that getting postponed till today. I have a real soft spot for films about demonic possession, while this one can be a little goofy at times it was still a decent enough indie horror.

After their uncle dies two siblings Erin (Aurora Heimbach) and Josh (Tony Spitz) inherit his remote property. They decide to head there, along with a bunch of their friends that include among them deaf Tara (Sandra Mae Frank in an award winning role), jokester Freddy, jock Brandon, and Wiccan Grace (Kate Rose Reynolds - She Wolf Rising), with the aim to have a weekend full of drugs and alcohol. During their partying on the first night they discover a secret room down in the basement that is set up with the necessary items to summon a demon from Hell, thinking it will be a fun jape they perform the spell. Unknown to the others Grace ends up getting possessed, and one by one the demon within her sets out to consume the souls of her friends... 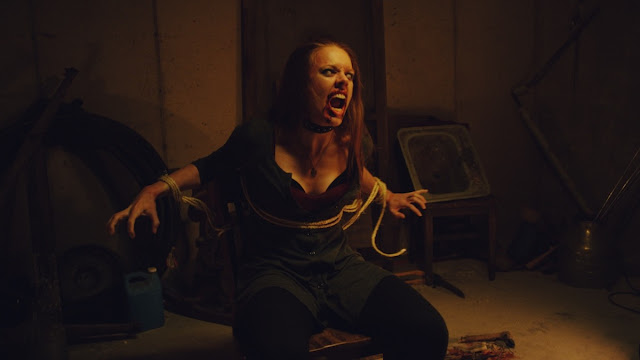 This starts off pretty weird due to the very strange dynamic the group have. They have strange songs, drinking games, and party traditions that I think are there to make you aware of how tight a bond these life long friends have. As an outsider it just seems bonkers though, such as the crazy songs they all know off by heart, or the insane looking nonsensical drinking games they play. They have such an awkward looking way of partying that it seemed like none of the characters had actually partied before and were there for montage shots only.  Having a deaf person among their number means the majority of the lines characters say are also said via sign language which was a nice touch. Both these factors gave Soul to Keep a bit of a different vibe.

Once the possession has taken place events move fast with there not really being much down time. I liked how the demon acted in that upon appearing it really seems to be enjoying having a body, going on a sex, drinking and eating frenzy like it was starved for all of those things. The make-up effects for the possessed were not bad, milky eyes and blood soaked mouth. Its main form of attack was by putting a large fleshy tongue into peoples mouths to draw out their soul. This seemed to be done via CGI and uniformly looked terrible. Thankfully that was the only bad use of CGI as elsewhere it looked good. I appreciated small details like little bugs crawling on the walls, and one effect of a character getting part of their ear bitten off looked great, so just the demonic tongue when it comes to dodgy effects. The demon has an over the top feeling to the way it is shown, but this fitted quite well rather than bring you out the moment. Looking and acting very evil made these demon fun and reminded me a bit of the deadites from the Evil Dead series (as did one cool scene that had the demon's consciousness flying around the property). 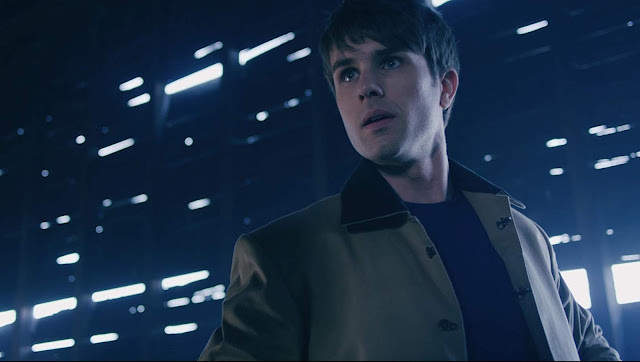 Sometimes what the characters do become inadvertently funny. One scene that springs to mind has someone getting attacked by a demon in the background, while in the foreground the deaf girl sits oblivious to what is happening. The guy getting attacked then randomly throws his shoe in her direction to try and get her attention, I found this pretty hilarious which I don't think was the intended effect. Characters in general follow stereotypes, yet I didn't really mind that. What I did mind was Josh who the film with some misdirection seems to cast as the main protagonist. His character was full of such cheesy lines, and his earnest serious attitude just put me off. In general I found the females to be the more interesting ones, though token black character Kimberley had so little lines that I wondered why they even bothered including her. The plot on the surface seemed simple but there were a couple of great twists that led to past events playing out again but showing things from a different perspective. The first of these big twists was more fun, even if motivations seemed a bit insane. The second twist would have been awesome were it not for the fact the viewer is expected to believe it could all have been achieved within around a five to ten minute time frame without anyone else realising what had been done. Ok, so despite that suspense of disbelief it was actually pretty cool.

Soul to Keep was a fun indie horror that is occasionally a little too by the numbers but has some nice moments, and aside from demon tongues has some decent enough effects. I enjoyed following the ride to see how it would all play out. Not the best demonic possession horror I have seen, but it was plenty enjoyable enough.