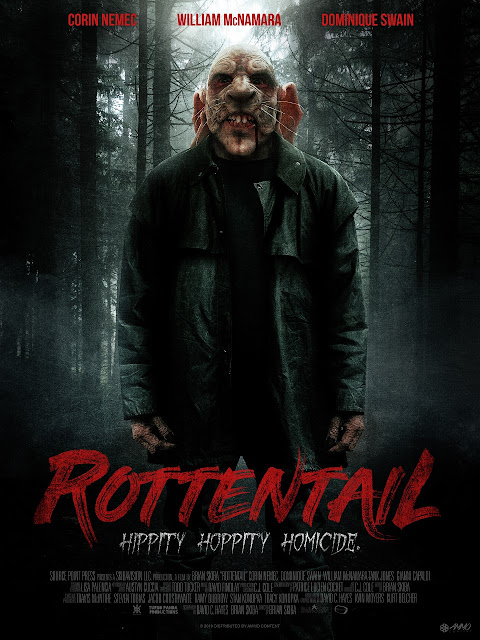 Rottentail is a comedy horror directed by Brian Skiba and which was based on a graphic novel by Kurt Belcher. Watching this it is not surprising it's based on comics as it is very bright and over the top, looking like a graphic novel that has been brought to life. This is indie b-movie shannangins and it opts to go for gross out comedy for the most part which couldn't help but bring to mind comparisons with Peter Jackson's Braindead (Dead Alive).

Peter Cotton (Corin Nemec - Stargate SG-1) is a rabbit obsessed scientist that is working for the U.S military, working on a cure for infertility. A colleague of his is also working with rabbits, though he has created a mutant creature hoping for it to be used as a weapon. Peter discovers this creature one day and while trying to free it from its cage is bitten. The bite gradually transforms him into a half human/half rabbit monster who comes to call itself Rottentail. Meanwhile an old school friend of his - Anna (Dominique Swain - Face/Off) has asked Peter to help her prove that the secretly corrupt local pastor - Jake Mulligan (William McNamara) has illegally acquired her deceased father's church. Despite now being a murderous monster Rottentail sets out to help his former friend. 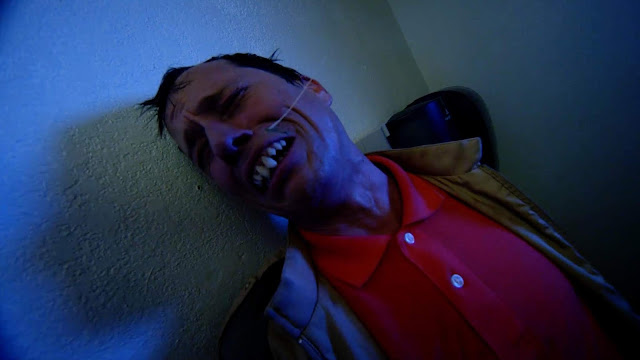 So weirdly enough this isn't the first half man/half rabbit monster movie I have seen, that would be 2015's Bunny the Killer Thing. Both films by subject matter alone are horror comedies, and both have their moments of bad taste, having plenty of jokes revolving around sex and bodily functions. The transformation of Peter is relatively quick here, there are a few scenes of the initial change but the mutations (that all happen off screen) quickly turn Peter into the monster. This is a good thing for the most part as scenes of him and his new personality battling for control made me cringe a bit as Nemec hams it up giving a Jim Carrey like over the top performance. Rottentail is essentially Jim Carrey's portrayal of The Mask character crossed with Robert Englund's Freddy Kruger. The crazed bunny is constantly wise cracking and talking to himself, while all his victims get their own one liners as he finishes them off. It's an acquired taste and eventually I came to not really mind this character. The fact this is based on a comic, along with the visuals of the film means this over the top method of acting actually fits in quite well.

Apparently this follows the plot of the graphic novel quite faithfully but for me it didn't really seem to flow that well. Not many of the scenes and situations seem to fit together, at times I thought to myself that you could drastically mix up the sequence of these scenes and have it not really affect the movie at all. It is so concerned with setting up crazy outlandish situations that there isn't a decent sense of progression. One moment this will be copying Spaghetti Westerns with a duel in a frontier ghost town, the next it will be aping war movies, complete with a grain effect over the footage. Scenes such as Rottentail appearing in a van of weed smoking hippies, or secretly hanging outside the house of Anna feel so random, and add so little that the main plot fades a little into the background. I liked the initial escape from the military base, and I liked the finale that takes place during an Easter festival, but there was a lot in the middle that was kind of forgettable. Also there was essentially a rape scene played for laughs, only saved in that the victim bizarrely didn't mind a stranger attacking her, but this still left a bit of a nasty taste. 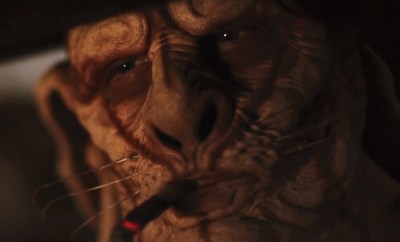 The special effects were a mixed bag, but going back to the comic book feel they worked well. Rottentail is able to move at super speed which is displayed by bright green electricity flowing around him, explosions and cityscapes look extremely computer generated, but then the other effects actually look fun, such as a heart getting ripped out of someone's chest, and a male member getting ripped off. There is a lot of blood and gore here, but there is so much of it spraying around everywhere that it is more gross than unsettling, of course this was the intention as a lot of the humour comes from characters getting sprayed with bodily fluids. Rottentail himself was an ok character, I found him to be a bit annoying, and his motivations to be pretty random. Stand out though was McNamara's deliciously evil Mulligan, he gave a great zany performance as the off kilter pastor that had zero morals, and a malicious glee for every single bad act he committed.

Rottentail is a film that doesn't even attempt to take itself seriously, it's a stupid story and it knows it, in fact it plays to its strengths and double downs on the comic book angle. There is plenty of blood and violence to be found here, plenty of lowbrow jokes, and if you are looking for entertainment and willing to switch off your brain then it can be enjoyable enough. Rottentail had its red carpet premiere on April 11th and opened theatrically on April 12th.