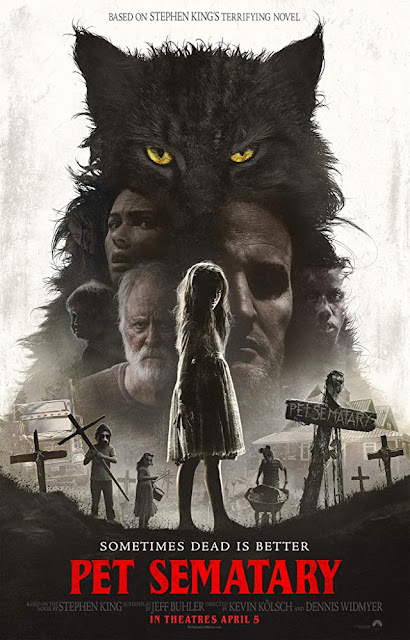 As I said back in 2012 when I reviewed Pet Sematary Two, I liked the original movie version of Pet Sematary but I couldn't really tell you much about it due to near totally forgetting what happened. I thought that would help with this new remake of Stephen Kings (apparently) classic horror novel. This wasn't a bad film but even with the changes made to make it stand out from the original it did feel a little bit familiar.

Louis (Jason Clarke - Terminator Genisys), his wife Rachel (Amy Seimetz - Alien Covenant, Stranger Things), and their two young children Ellie and Gage move to a small rural town. They soon discover quite near to their new home is a pet cemetary which their next door neighbour Jud (John Lithgow - Rise of the Planet of the Apes, Dexter) explains is where the townsfolk have always buried their pets. One day Ellie's beloved cat Church is found dead, Jud tells Louis there may be a way to fix things without Ellie discovering this. In the dead of night Jud leads his neighbour to a remote ancient burial ground deep in swamp land and gets him to bury the cat there. To Louis's surprise the next day Church turns up seemingly alive and well, however the cat has changed into something quite...wrong. Later that year a tragic accident occurs, and Louis in his desperation decides against Jud's advice and does something from which there is no turning back. 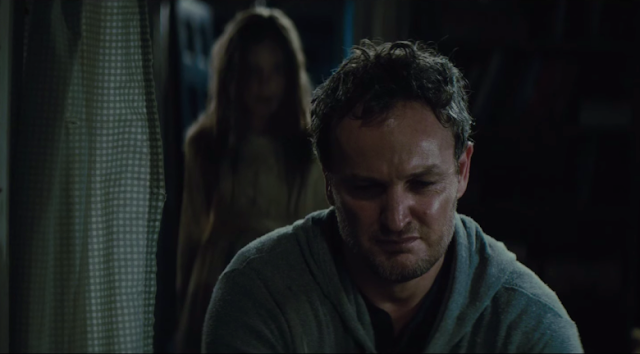 Often remakes feel pointless, maybe more so when the original is such a classic (it is one of the only film adaptations of King's books that he states actually scared him). There are some key changes done to set itself apart both from the original film as well as the book. For anyone who hasn't seen the trailer it will be a mild spoiler but here, rather than have the two year old toddler Gage die in an accident it is instead his older sister Ellie who is brought back changed. The young actress Jete Laurence was most impressive. I have said it many times before but children can make or break horrors, usually due to their inexperience they are not the best, Laurence though shines. She essentially plays two different roles in Pet Sematary, her nice normal happy self, and then the very twisted dark version that comes back. She is the best thing about this movie, genuinely creepy and actually pretty darn freaky. I loved her scratchy voice, the sheer presence she brings to her scenes was also impressive. Being an older child it means there is much more dialogue between her and Louis, her descriptions of the afterlife are quite haunting, while despite her small stature she is a formidable creature!

This is a bleak movie with a sense of helplessness that is encouraged throughout with some lovely directing, and great cinematography. It also does the thing I almost like more than any other thing, by starting in the present then going back in time to show how things led up to that moment. A slow almost The Shining style overhead shot as the camera slowly pans up over a wood, past a burning house, before getting to a property full of bloody footprints and handprints was a great way to start any movie. This also had one of my favourite movie endings ever, the whole final scene is just chilling and a master class in direction, managing to end with the knowledge it has imprinted horrific clues as to what was going to happen next onto the viewer. Directors Kevin Kolsch and Dennis Widmyer (Holidays "Valentine's Day" segment) are obviously huge Stephen King fans as this remake is jammed full of references to his other works, everything from The Shining, to Cujo, It and even Carrie. The horror element was thick here but it lost atmosphere due to the very fact it was a remake. It was all well made, especially some of the bloody special effects, and make-up effects. The flashbacks to Rachel's childhood with the reveal of the cruel fate that awaited her sister was very effective though, how this feeds back into the hallucinations characters see was done very well. These flashbacks were the most creepy part of this. 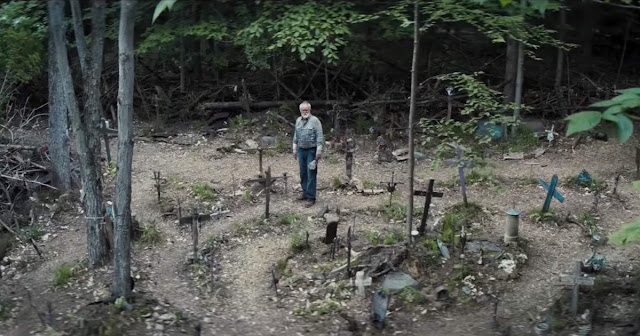 There were maybe a few too many jump scares, and despite the gothic atmosphere this wasn't that scary overal. The biggest issue came from the fact this was a remake, it was a nice twist changing the victim of the tragic accident that occurs here, but then it goes along a path that was overly familiar. While I thought the final third of the movie was the strongest part by this point I was almost itching to leave. Similar to a comment I read online if this had been an original film and not a remake I felt it would have fared much better for me. Despite that I did enjoy watching this and it has made me want to read the original novel.

Some might say Pet Sematary is a pointless remake, I feel that enough changes were made to justify its existence. By changing up elements of the original story, having it set in a more modern era (the 2010's I believe) and giving it a quality cast (and a very creepy cat!) I felt this wasn't a bad horror, even if unlike It it isn't going to set the world alight.