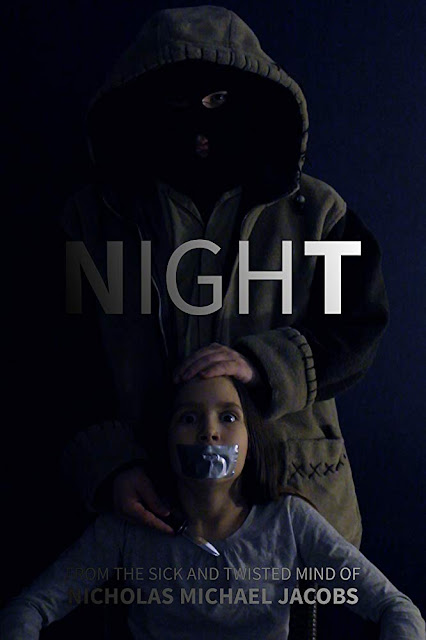 If I were to rank all the many different horror genres in order of preference I reckon the torture/snuff genre would be somewhere down near the bottom. The anthology Faces of Snuff I watched a few years back cemented that fact for me. Night feels like one of those shorts but drawn out to fill just over an hour. With all that said bear in mind I really do not like this particular sub genre too much, as that fact is going to impact my thoughts on this.

Casual serial killer Adam (Nicholas Michael Jacobs who also directed, wrote, edited, produced, and helped with the cinematography!) over the past six months has been kidnapping girls in order to kill them on live stream, both for pleasure, as well as to raise money from his viewers who can pay to request he do specific things to his victim. This found footage follows him as he abducts a young teenage girl (Gianna Jacobs) and puts on his latest show. 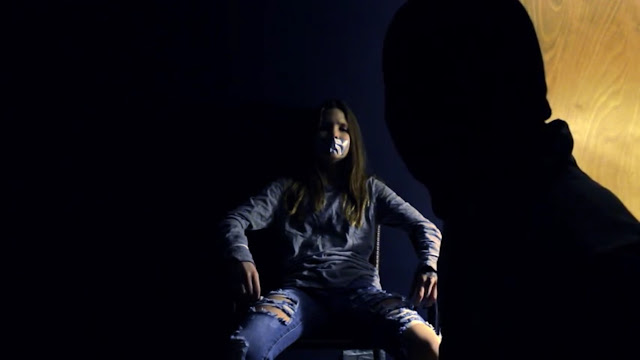 The way this found footage is set out I appreciated, but at the same time it was off putting. Usually in this genre for enjoyments sake there is editing to make slow parts move quicker, often with some sort of text at the start as an excuse for this editing. Here there is an intent to appear as realistic as possible, and so all the down time you would often get is left in. This makes Night have quite a poor start. The first four or so minutes play out with the camera pointing at a blank wall as Adam shuffles around in mostly off camera. Then we have around another five minutes of him out on the street stalking the girl in silence. Finally though there is a title card and the movie begins proper. This dedication to approaching realism is a double edged sword with it sometimes leading to a slight feeling of boredom, but other times drawing you into the experience.

The majority of this takes place in a small room, the only items of interest from the cameras view being a door, and a chair that the girl has been tied up in. Over the next fifty minutes Adam tortures the girl, while interacting with the chat room in the live stream he is doing, and occasionally talking to her. The special effects are minimal with Adam often standing with his back to the camera as he punches or kicks, later there is a slight blood effect. This is all done on a budget, but then this is an indie film with an estimated budget of $1,000 according to IMDB. To be honest I didn't mind the effects, they were passable, and I did wince on occasion, and felt a bit queasy on other occasions, so something must be going right!

The characters were both odd people. Adam felt like he had walked in off a more sinister version of The Trailer Park Boys. He was a bad person for sure, but he had a mild manner to him that was at times weirdly endearing. His low level irritation at the girl trying to escape for instance. The girl on the other hand suffers a lot, yet whenever she gets the chance to talk she doesn't sound frightened, or even that bothered about what is going on, and takes her punishment in silence. This can easily be seen as a misogynistic film, yet this character has a backbone to her. It was also fresh to have someone who was actually a teenager, rather than the usual way of having someone deep into their twenties trying to pass them off as someone ten years younger!

Your enjoyment of Night is very much going to depend on if you like this sort of film. For me it was off putting for the most part, I did enjoy the way this ends. There were some slight issues with editing when it noticeably changes takes when it is meant to be all taking place in real time. It is credit to Jacobs that he has done so much of this movie himself, it just wasn't for me though unfortunately.  Night was released via POV Horror on 17th March, and was released via Amazon Prime Video on 23rd March.