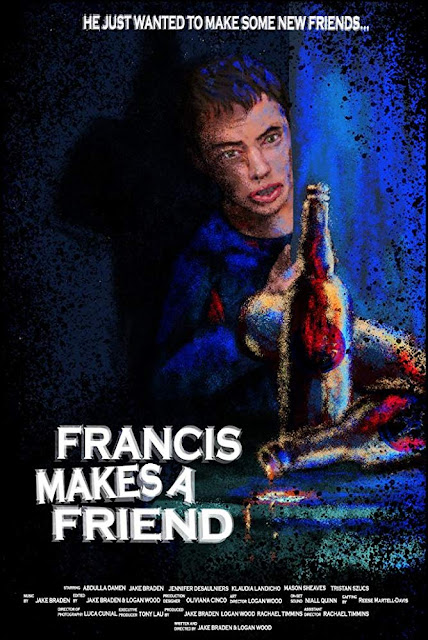 Francis Makes a Friend is a short fifteen minute horror written by Jake Braden, who also co-directed with Logan Wood, as well as features as one of the cast members. It works on a few levels in that not only is it a horror film in it's own right, but it also perfectly captures the real life horror of being in an uncomfortable social situation that you can't escape from. Another level for me personally was that it features puppets, which are a mild weird phobia of mine.

Francis (Tistan Szucs) has been invited to a small party that his new college friend Alex (Braden) has invited him to. Not only is he in an awkward situation due to not knowing anyone and being a bit of an introvert, but he is expected to drink which is something he doesn't do much of. As the night goes on the party starts to get more and more sinister overtones to it, but is this all just in his mind?

This short is split up into different chapters that chronicle the different parts of the party. These different scenes (or phases) such as Puppet Show and Dare Wheel neatly split up the short, even if at the same time give it a tiny bit of a disjointed feel. In each phase at least one out of place event happens that makes the normality of the situation take on a dark tone. This starts off gently enough with a dinner scene in which Francis's rice for a split second turns into maggots, but each of these phases ramps up. The highlight of this for me was Puppet Show which took place entirely as a literal show complete with location changes and multiple characters. Who knew a puppet being gutted and covered in blood could feel so disturbing!

Coming from the perspective of Francis, the film as a whole follows the perspective of an unreliable narrator. There is a sense what is happening could be interpreted two ways, either it is all in his head due to some kind of mental illness, or the surreal stuff is actually happening due to some malicious intent. The confusion and uncomfortableness of Francis is portrayed well by Szucs, while the other cast members adherence to acting normally creates an unsettling disconnect. This is all helped by some nice camera effects and vocal distortion. With all this weirdness going on the ending is a bit underwhelming, but then that might be the point with the perspective switching to reality rather than Francis's claustrophobic view.

For me Francis Makes a Friend worked due to creating a sense of being trapped in a social situation. There may not be much actual story to it but I was interested to see how things would turn out, and it is worth it for the puppet story alone that is the definite highlight. I believe this is currently having a festival run, so if you get a chance check it out.