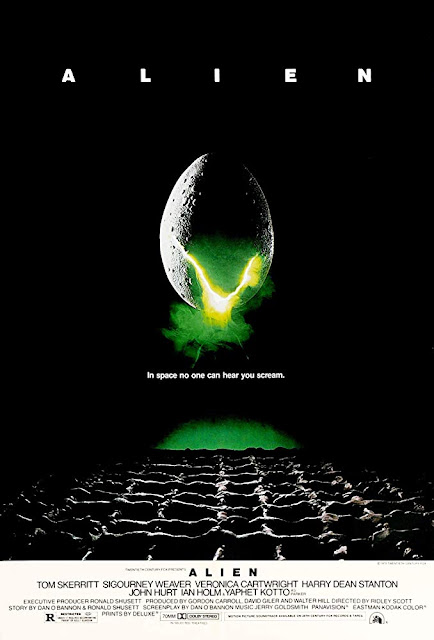 The Alien series of films have for whatever reason never really set my world alight. The other day I had the strongest urge to check them out once again and so rather than dig out my VHS tapes I bought a Blu-ray box set of the first four films. Before yesterday I had only seen Ridley Scott's Alien all the way through the once, and that was around twenty years ago, so I was interested to see what I would think of it now. I will add that it is the 2003 director's cut version of the film which removed five minutes of original footage and replaced it with four minutes of additional that wasn't in the original theatrical cut.

The crew of a space travelling merchant vessel that is on its way to Earth (that include among them Sigourney Weaver as Ripley) get awoken from cryosleep ten months early due to the discovery of a distress call from a moon their ship is passing near to. Protocol says they are to investigate the signal before they can continue their journey. The crew discover an ancient spaceship, and within it a whole load of giant eggs. From one of these eggs an alien creature bursts out and attaches itself to one of the crew members, the victim is taken back to the main ship where events happen and soon a huge seemingly unkillable alien creature is on a murderous rampage. 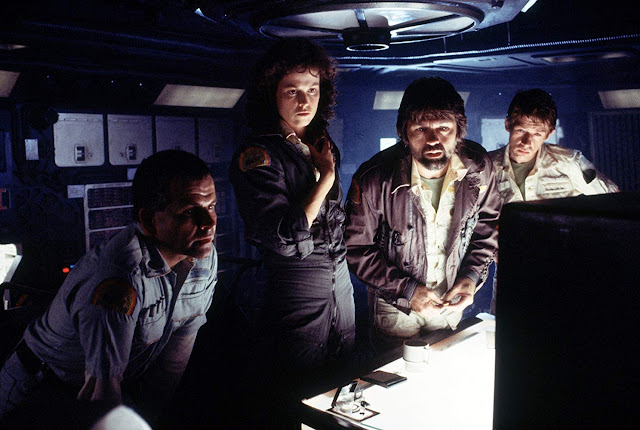 I at first thought that this seemed to be a little slow paced, but then I had to remind myself that one of my favourite horrors Halloween can also be seen as slow in the modern era. This is a masterclass at keeping the titular foe barely glimpsed throughout, indeed in around two hours the xenomorph gets just four minutes of screen time in total. I remember as a teen thinking the creature looked like a man in a suit, which it is, and to my mind it still looks like a man in a suit on the few occasions you see it properly. Usually you just get glimpses of it, all that are quite iconic images today, such as the tail wrapping itself around the legs of a victim, or the close up shot of its head with the second mouth coming out of the first. This is great creature design, and in general the film as a whole is very well designed.

The set used for the spaceship shines with how well it comes across. Murky rooms with glowing lights, and claustrophobic corridors, dingy air vents and dark chain filled chambers dripping water make it almost a character in its own right. It is about an hour into the movie before the xenomorph makes an appearance, the lead up was so worth the wait. The investigation of the alien spacecraft, then the discovery of the facehugger is all so iconic even to someone like me who hadn't really watched too much of it before. The effects were good throughout mainly, there was a giant explosion towards the end that look quite terrible, but other than that this was all good stuff, the retro looking computers in the space ship just set this apart from anything more modern. The gradual build up of events is masterful. 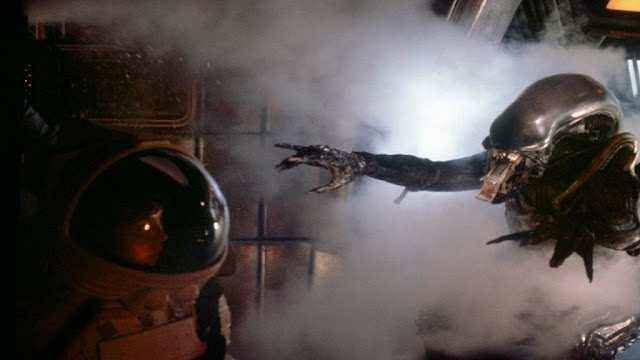 I was eagerly awaiting the chest burst scene that everyone knows about even if they haven't seen the movie. While it was far less gory than I remembered it was still a great punctuation point separating the more slow paced first half to the hunting the alien that the second half is comprised of. Weaver was fantastic as the main lead, I didn't realise how good until seeing this again. I love that the fact she is female doesn't play into anything that happens, she may be the final girl but she starts the movie a bad-ass and so isn't someone who has had to be morphed by events into one. Each of the characters in the movie didn't have genders assigned to them beforehand and so their roles were written for male or females. This is a strong cast even outside of Ripley, the characters of Dallas, Lambert, Brett, Kane, Ash and Parker might not have too much to them but they fit this sci-fi nightmare world well.

I may not have found Alien to be scary anymore, but the whole atmosphere, directing, and pacing of this movie really do show that even nearly forty years on it remains relevant. The series may have lost its path after Aliens but I found this to be a movie that very much stands the test of time, and is an essential watch for any fan of horror. Still not a favourite movie of mine, but I found myself appreciating it so much more.