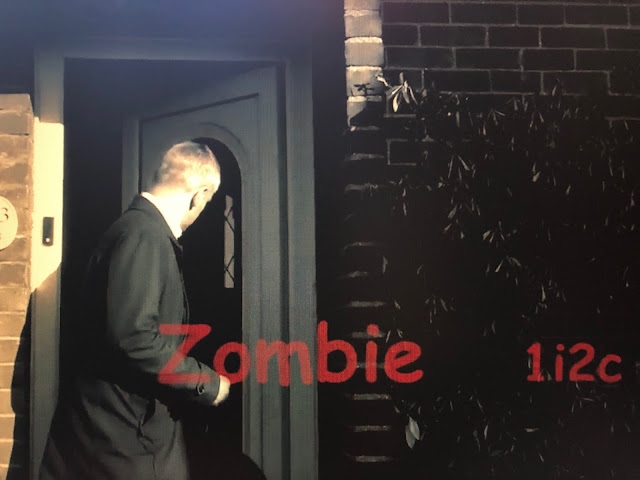 Back in August last year I got to check out two music videos/short films that were made in part thanks to composer/producer John Whitaker (1i2c). Both Undertaker and Umbilichord used a great blend of music and visuals to tell a story. Now he has released a new hybrid - Zombie, which of course I was immediately interested in.

This six minute short sees the emergence of a classical zombie (John Whitaker) who emerges from a sack in a biohazardous area and stumbles off into a nearby town. Meanwhile a more human character (Richard Markworth) leaves his house, and makes his way across the town, eyes glued to his phone throughout his journey.

So the idea behind this is very obvious, the social commentary of humans acting more and more like zombies themselves is one that has been done many times before (most notably by George Romero in Dawn of the Dead). In these times it seems that contrast is all the more fitting with everyone owning mobile phones, and everyone for the most part seeming unable to leave them alone. There is a nice mix of the two different characters making their way through town which also had some nice distinctive camera work. The traditional zombie is full of close up camera work and dizzying point of view shots. Meanwhile the human character gets more straight camera work.

This is all held together by the music which drones on in a relentless fashion which goes well with the two zombies walking ever onward. I most liked the zombie parts here, the camera work is fantastic, and there are some great shots, such as a hand on metal railings, and one part where the ghoul walks in front of the sun. John Whitaker was recently at Nova Nights: Progressive, Transgressive & Underground event where three horror films of Nicolai Kornum featuring his music were shown (Hammer Blows, Umbilichord and Undertaker, this was followed by a live interview between him and Billy Chainsaw, this took place on 21st March so I'm a little late mentioning that! Anyway, check out Zombie below and see what you think.

Posted by Daniel Simmonds at 12:06