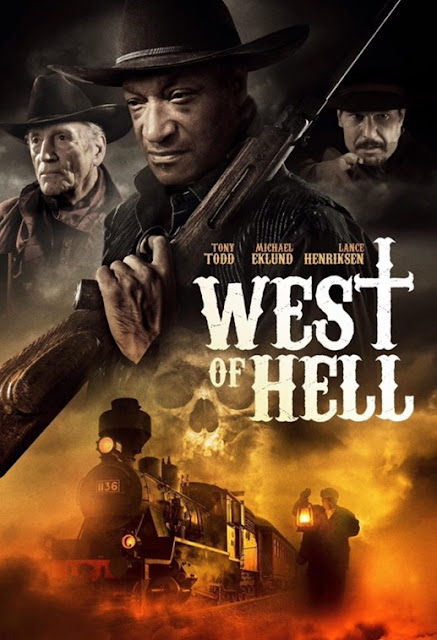 West of Hell describes itself as a horror Western which I guess it could be seen as. This is very much a low budget horror, one that has a decent enough idea for a story, but one which is executed in a way that failed to satisfy despite some cult actors being in it. This was directed by Michael Steves (Clinger) who also co-wrote it.

It is 1872 and a bunch of strangers get aboard a night train bound for Atlanta. These include wanted criminal Jericho Whitfield (Tony Todd - Candyman, Night of the Living Dead) who intends to scalp and kill fellow passenger Annie Hargraves (Jennifer Laporte) as revenge for his former master's treatment of his family, as she is his daughter. Protecting her is mercenary Roland (Michael Eklund - House of the Dead, The Outer Limits). However this drama is all put on hold when the passengers realise something very wrong is going on, and that they may well be on a train that is going straight to Hell... 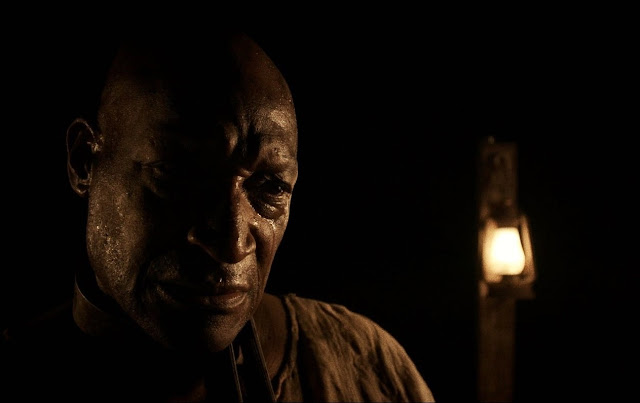 West of Hell feels like two separate films that have been patched together quite clumsily. The first half plays out with a mild feeling of a Quentin Tarantino movie, though less skillfully done. How it is slowly revealed that none of the characters on the train are as innocent as they first seem via their interactions with each other was engaging enough. It would have been nice to have at least one character who you could get behind though. Everything is rolling on ok until the horror elements are introduced. It isn't the horror per se which is the problem, the second half works a lot better than the first, and that second part is pure horror. It is more that the introduction of this element just doesn't work. Initially it is strange spooky noises that are heard, this weirdly enough is the way that the strangers band together despite no real evidence anything bad is going on. Then seemingly randomly a shape shifting antagonist is briefly introduced.

Around the halfway point and all this silliness is dropped, it is revealed that everyone is on a train to Hell and that the Devil is going to test them. The already limited set of a couple of train carriages is then changed to blackness. This did add atmosphere I will admit, but it didn't help with the very cheap feel this movie had. I don't know why this aspect of the story was approached in such a stilted way, remove the whole shape shifter part of this and it would have worked a whole lot better, or at least made this feel more consistent. There was a Twilight Zone vibe at times here, a feeling not unwelcome. This part also suffered, mainly in that the voice of the Devil for a good chunk of this is so distorted and warped that I really had to concentrate to understand what was being said. There were at least a few lines where I just couldn't understand it in the slightest. The special effects were not stunning but they do the job they set out to do. There isn't too much violence to speak of, though there was one kinda cool scene of a characters face getting ripped off. 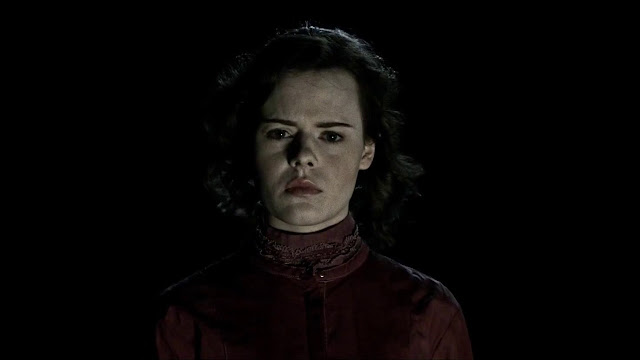 The acting is never anything amazing, but with these one dimensional characters it is hardly surprising. I enjoyed Todd in this, though he is the Candyman so I will enjoy him in anything I see. I also liked Lance Henriksen (Aliens, The Terminator) in a small role as the Devil. He may not give a stand out performance, but he is a living legend so instantly makes West of Hell better than it should be. Of the rest of the cast there is no one memorable, I felt Hargraves could have been good if her character was better written, and Eklund was enjoyable enough for what he had to work with. At times it felt like the budget got in the way of the scope of the story, either that or the story just wasn't that good to begin with. Smooth this out and it could have been fun, as it is it feels a bit confused and unsure of itself. The Western aspect mostly plays into the subject of slavery with this shown both in flashbacks, as well as featuring former slaves, and former slave masters.

West of Hell is a horror that just seemed to have been put together in a way that never really satisfies, the story felt like it needed more time in the oven, while the characters are underdeveloped, and the events that happen unsatisfying. Still for me Todd and Henriksen saved this from being a complete disaster, but at best it is still decidedly average. West of Hell is out now thanks to High Fliers Films.