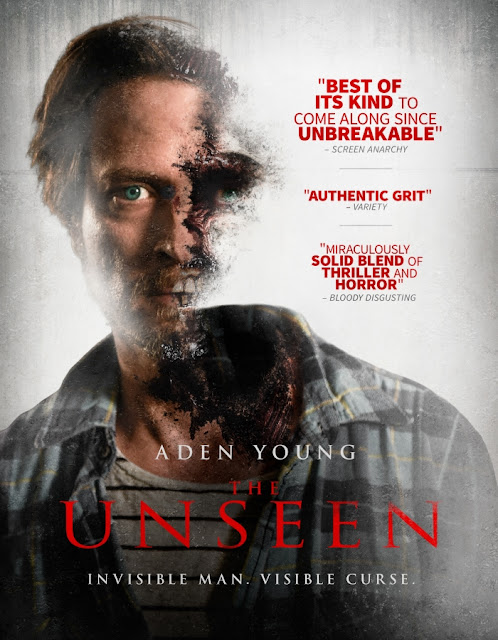 Whenever I get sent a film for review I try my hardest to avoid reading the synopsis before hand. With Canadian horror The Unseen I knew it be an invisible man film, yet my assumptions were totally different to how this actually plays out. All too often this type of film will centre on a scientist that has accidentally caused themself to become transparent. That story has been done so many times before that it has made the whole notion of an invisible man to be dull. Here though we get a much more human story with the invisibility treated as a disease.

Bob (Aden Young) is a miserable industrial worker who hides the bizarre secret that he is slowly turning invisible. One day he receives a call from his ex - Darlene (Camille Sullivan - Dead Rising: Endgame)  asking for his help with their daughter Eva (Julia Sarah Stone) who has been acting out of character in recent months, so Bob decides to travel down to see her. When she then goes missing Bob goes on a desperate quest to find her... 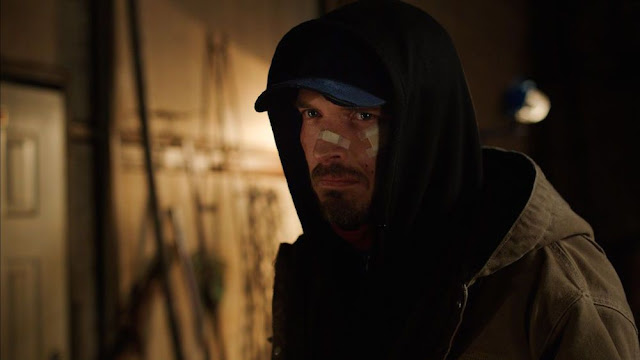 The whole concept around this movie is of course unrealistic, yet the way the subject is handled here was very well done I felt. It gave a sense of believability due to the drama style situations that present themselves. The invisibility feeds into everything that occurs here, yet it is not the focus, instead it is about the rekindling of a relationship between a estranged father and his teenage daughter. The main sense of peril comes from a subplot revolving around illegal activity that has nothing whatsoever to do with Bob's condition. This is also a film that takes itself very seriously, characters are morose and bitter, Bob in particular is an abrasive protagonist whose attitude does not help any situation he gets into. There is lots of drama here but not much light. The way the acts are set out was something I did appreciate though. When a good half hour into this the attention switches to Eva I was surprised, though this is only briefly on her, but was a welcome vacation from Bob's story.

The invisibility here happens in patches rather than a sudden vanishing. So Bob compensates for this by wearing gloves and bandages to hide the parts of his body that have 'gone'. It led to some interesting ideas, for example Bob has a broken rib which he suffers through during the whole film, this trauma created at some point before the film even starts. Due to his stomach area being see through it explains why he was never able to get medical aid for this. The invisibility effects I loved, parts of the body being missing looked pretty good. I also loved that initially it is only the skin itself that is invisible, so for instance you can see the skeleton and internal organs inside of Bob. Due to the character being covered up constantly the glimpses are fleeting and usually shown for impactfulness. Again going back to neat ideas I liked how his condition is treated as if it is a real illness, the increasing invisibility causing physical pain. There is no explanation of how this came to be, other than it was a genetic disease passed down from his father before him.

The Unseen was directed and written by Geoff Redknap who is best known for his prolific special makeup effects work in everything from Supernatural and The X-Files to Fear the Walking Dead and Final Destination. He didn't do that for this film but it may explain why these effects look so good here, even if it does appear to be CGI rather than practical effects. The directing style is to use frequently shaky camera work, to give an impression of really being in the scene rather than observing from a distance. It was a bit annoying to begin with but I adjusted to this style of filmmaking.

By trying to come across as a more realistic take this also became a bit of a slow burn. Action scenes are few and far between with only really two sequences that make full use of Ben's affliction. In between is lots of slow conversations, and idling away the screen time with road trips, diner visits and shots of the bleak but beautiful scenery. Having expected another mad scientist movie I didn't mind this change up, though it was something that made me feel like I would never need to watch this again. Also the bleak tone isn't carried through, it all ends on a relatively upbeat tone that felt at odds with the general direction this had seemed to be going. This suffers the usual distracting element that when Bob becomes completely invisible he appears to have decided to start walking around naked! 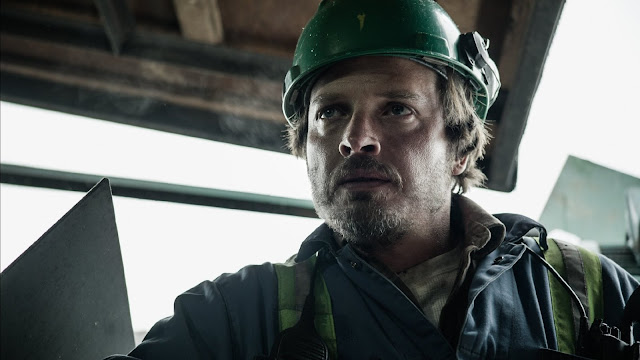 The Unseen handles its topic in a far more interesting way than the traditional style of story. Personally though I have never found invisibility to be that interesting an idea. I did like how realistic the approach taken here, and I did think the special effects were good, but this had the slight feel of an only slightly better than average film, even if it was well made and with a core cast of actors who did well (aside from a few dodgy side characters). The Unseen was released on 26th February on DVD and Digital in the U.S thanks to Monarch Home Entertainment.