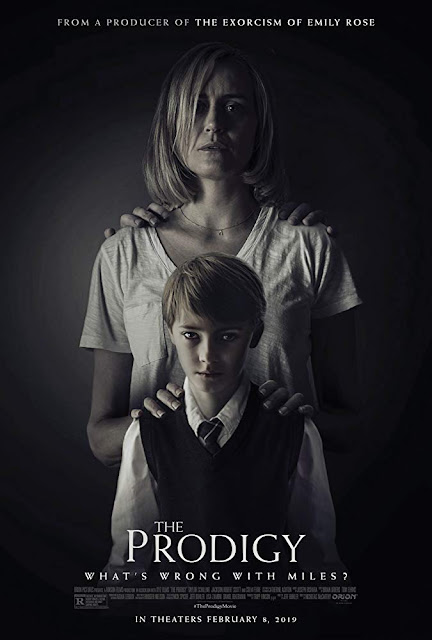 I remember seeing The Prodigy I think back in 2004, they were very good. That was mostly what my thoughts were as I was waiting for new horror The Prodigy to begin. Of the film itself I knew nothing, I assumed it was about a child, as a boy featured on the movie poster, but other than that nothing. This was directed by Nicholas McCarthy (Holidays "Easter" segment) and written by Jeff Buhler who wrote the screenplay for the upcoming Pet Sematary.

At the exact same time that twisted serial killer Edward Scarka (Paul Fauteux - Frontier) is gunned down by police, baby Miles is born in a hospital to new parents Sarah (Taylor Schilling - Orange Is the New Black) and John (Peter Mooney). As Miles grows up it is soon apparent that he is a child genius. By the time he is eight though, Miles (Jackson Robert Scott - Fear the Walking Dead, It) starts to exhibit sadistic tendencies and his parents come to fear him. Going to a child psychologist Sarah is directed to a man who offers her a bizarre explanation for her child's behaviour.

Man this is one bleak movie, this plays it seriously throughout with no sense of humour at all. The way this is edited it is clear right away that Miles is somehow possessed by a dead serial killer, scenes of a female victim fleeing from his house mixed in with John driving Sarah to hospital in the prologue make this crystal clear. A nice touch was that the gunshot wounds on Scarka match the blood spots that are on baby Miles when he is born. After a meandering montage of notable moments in the family's life it begins properly eight years later. Kids can be terrible in horror films, for one their acting ability is limited, then there is the opposite problem where sometimes scripts for children make them sound like creepy little adults. I'm in two minds about Robert-Scott, I think I thought he was not bad if his character a little irritating. He did bring with him a real sense of creepiness though, he can certainly look creepy, and some of the lines he gets worked well. His intelligence means he is a master manipulator as well as a killer which leads to some clever enough moments and revelations.

There were some good special effects here also. The 'shards of glass' in the pad of the foot idea has never failed to get me wincing and closing my eyes, here, much like in Revenge I could barely watch it. But that was a great indicator as the first horror moment of the film. Throughout the gore effects looked good, from the discovery of the missing family dog, to later more dark scenes. Of those later scenes I was impressed that they showed events in detail, no cutting away, or shooting around a child, but instead have him centre screen, well aside from him beating a kid with a pipe wrench! The kid may be scrawny but the film made me think to myself there's no way I would spend the night in the same house as him. This did have him often miraculously armed with a sharp implements to balance against his puny frame.

I have no problem with bleak films at all, ones that have no light moments can still be outstanding, Straw Dogs and Hereditary spring to mind. The problem with The Prodigy though, unlike those films is that none of the characters here are at all interesting, especially the parents which the main focus is on. Sarah has nothing to her outside of a dutiful feeling to try and save her son, doing anything along the way to achieve this. An evil soul reincarnating into the body of a baby is sold to Sarah in a scene that had me inadvertently laughing out loud at the explanation. Saying that, the guy who tells her this was played by Colm Feore (The Chronicles of Riddick, The Umbrella Academy) who was great in this movie and had one of the best scenes. John fared slightly better in that least he had a backstory of an abusive father, whose violent streak has been passed down, but then he is out the picture for a lot of the film.

While there is a general sense of creepiness around Miles, all too often this resorts to jump scares, usually of young Miles suddenly taking on the appearance of adult Scarka. These are frequent, but I did jump out my seat on one occasion. While not keen on jump scares at least they were balanced with more noble ways of horror. There are some good parts here, but then there are also glaring plot holes. If The Prodigy had better, more developed characters this could have been something special, as it is though I found it too hard to care about any of the characters to really find myself enjoying this too much.