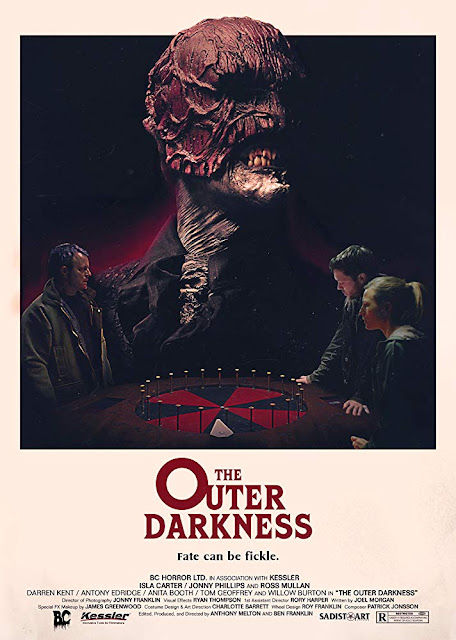 I've mentioned it before but ALTER is a 'premium horror entertainment brand' that showcases cinematic horror shorts from around the world. It operates on multiple platforms including YouTube, Facebook, Instagram, Twitter and its own website. A few weeks back horror series The Outer Darkness joined its ranks of films and shows. Originally released in 2015 as a short film, directed by Ben Franklin and Anthony Melton, The Outer Darkness has now been split into three parts and released as a series.

Father Jonathan Crowe (Jonny Phillips) runs a support group for people who have experienced bizarre encounters. During one meeting Jenny (Isla Carter) arrives and recounts a haunting story about a game of chance she took part in where winning grants you your wildest dreams, but losing has dire consequences...

Each of the three parts is roughly split into around eight minutes and by the end Jenny's story at least is told. Part one introduces the support group and the various characters within it. while starting off the anthology segment. Part two contains the majority of the gambling storyline, before part three brings it to a close and takes us back to the present day. I found this to be quite captivating with what was going on, there were both unexpected twists and a suspenseful atmosphere. The wraparound story was something that felt like it could really go somewhere, especially with later revelations. I felt if this was made into a proper anthology show there were a lot of places to go to if each of the characters in the meeting got their own segment, that would be something interesting.

As it is, adapted from a film I don't know if there will be more to come, or if this is it. Regardless this had some decent acting, and some nice creature effects. With most this taking place in a dark room it did come across as a bit sparse, though this darkness also focussed the attention on the insular drama whose subject matter occasionally made it feel slightly ridiculous. Still, I have to admit my attention was drawn. There is a lot of good stuff on ALTER, The Outer Darkness is no different. Check it out for yourself below.