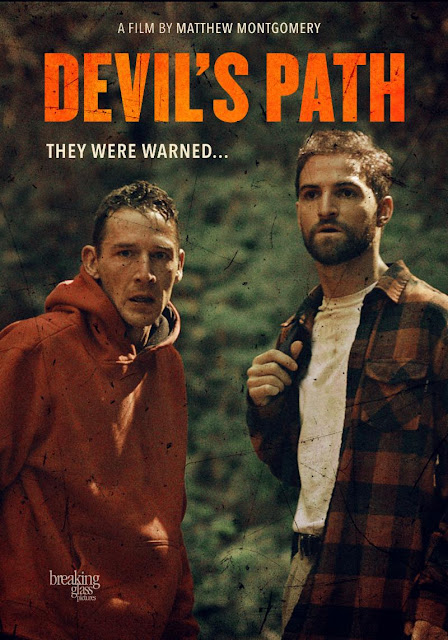 Again I find myself apologising for how long it has taken me to get a blog post up. I intended to watch the award winning LGBTQ psychological thriller Devil's Path on Friday, but it has taken me three days to get through it, no fault of the film, more my own circumstances.

It is the early nineties and Noah (Stephen Twardokus who also co-wrote) has gone to a remote forest trail called Devil's Path, which is a well known gay cruising site (as far as I can tell a place where people looking for simple fun go to hook up with strangers). He meets up with a random guy - Patrick (JD Scalzo) and together they head deeper up into the mountains, ignoring the warnings of a park ranger that there have been unexplained disappearances occuring there. Noah ends up getting assaulted by a stranger, and soon him and Patrick flee deeper into the woods, with two angry men armed with branches in hot pursuit. As they work together to escape their attackers and make it back to civilisation it starts to appear that maybe the biggest danger they face is from each other... 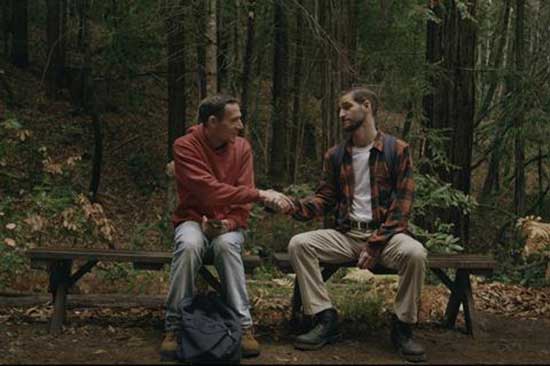 The mild start to this hides what turns out to be a pretty bleak film. Within fifteen minutes the two are being hunted, but right off the bat I found the attackers to be kind of lame. They are armed with branches, but I wouldn't say they were big branches, more like long thin sticks. I also found the initial chemistry between the two leads to not be great. It was a nice touch that they have such opposing views that they almost dislike each other, and that they are then forced into a situation where they are forced to work together despite these differences. However there seemed a bit too much antagonism between the pair with no apparent reason for this. For example when Noah goes to wash some blood off his face in a stream and Patrick notices scars on his back he angrily confronts him about it, this seemed to make no sense.

There is a turning point in Devil's Path when it becomes less about people being chased by crazies and more about a psychological battle between two very different men. Out in the middle of nowhere it is revealed that neither the two people are as sweet and innocent as at first appears. I liked the camera work that points to this in a sometimes subtle way. From suspicious wayward glances to discovered lies and alarming backstories. There are some nice plot twists along the way, stuff that I didn't expect but neither of these two leads were likeable. Noah is a nervous, constantly worried looking guy, while Patrick just seems angry at the world, neither are characters I could find myself to root for. While they are being pursued, this is pretty much a two person film, I found the sub plot of being chased a bit farcical, the two guys after them very tenacious as even hours after losing them they are still both jogging around with their ridiculous thin branches. 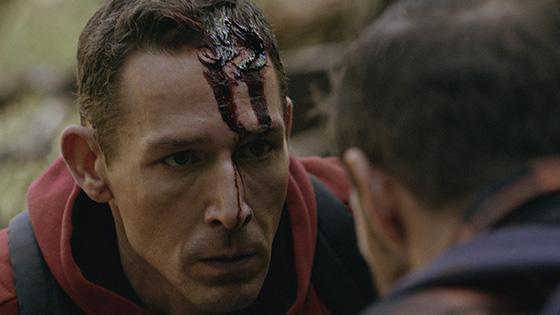 I did wonder how the LGBTQ angle would fit into this horror. I guess the biggest part is where the film takes place. This has an all male cast, and most the side characters are just random men standing around on their own in the woods looking serious. While it is implied both the characters are gay, between them comes more a discussion into if love, true love is a real construct, or if it is just a fabrication brought about by chemicals in the body. The psychological aspect was something I didn't expect (I never read the blurb before watching a movie for review), I found it interesting the whole chase plot point faded into the background. This had some nice locations, the woods felt like a perfect setting for a story like this. I found some of the backstory to be a bit cliche, and there were various parts of the story that had me scratching my head.

Devil's Path got better and better as it went along, the more bleak this turned the more I got engaged with it. While the initial meeting of the two main characters didn't feel as well polished, by the time the final third comes on you really get a feel for this characters, helped in no small part by the acting of the leads. Parts around the edges seemed a little wooly, the dialogue felt a bit unnatural at times, but overall I liked how this eventually turned out. Devil's Path comes to DVD and VOD on March 5th thanks to Breaking Glass Pictures.