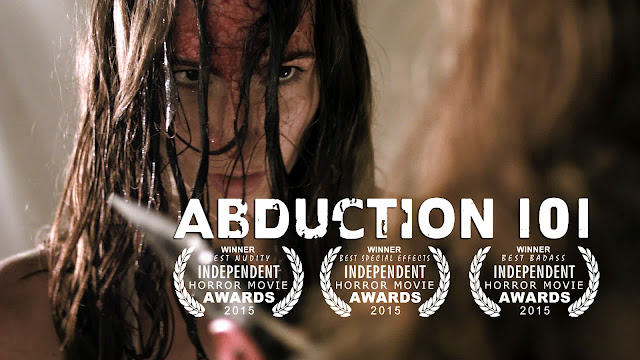 Abduction 101 is a good example of an indie horror film done right. It impresses with a novel format, and an engaging soundtrack. Directed and written by Robin Entreinger and Steve Noir, this was nominated for Best Special Effects, Best Badass and Best Nudity Scene at the Independent Horror Movie Awards. This movie also happens to mark the first test run of my new Bluetooth headphones for my PC, a test that worked very well and really added another layer to my enjoyment.

So this follows quite an odd style. The events of the film are a retelling of a nightmare that a woman (played by Luna Labelle) is telling to an off screen person. In this nightmare she tells a story about three women (played by Adrienne Stone, Nixi Oblivion, and Brianna Shewbert Rouse) who live in a house by some woods. While out running one day one of the housemates sees strange masked men wandering around and realises they are coming from a strange compound in the woodlands. Curiosity getting the better of her she, along with the other two decide to investigate to see what exactly they are up to... 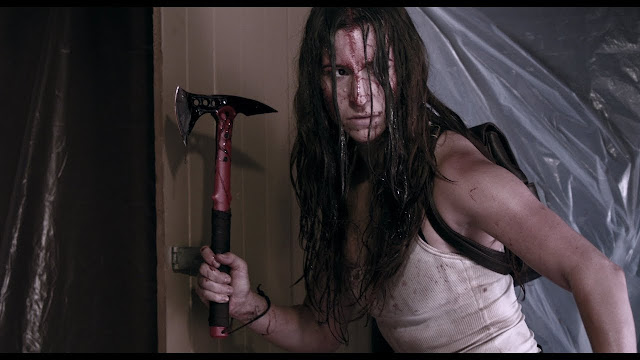 I found the retelling of a dream to be a pretty cool way to plot a film, especially when the person telling the story barely even features in the dream at all. A lot of this occurs with following just one character around at a time. Filling in the gaps you have both the primary narrator explaining what is happening, but you then also get the immediate thoughts of characters as narration as they move around. This added so much as without it may well have gotten slightly dull. At several points during the course of Abduction 101 it goes back to the real world, signified by being shot in black and white. Within minutes it is established that the whole woods thing is a dream, yet by having that in colour and the real world in black and white it makes it the focal point. It still felt like maybe the events happening may actually feed back into reality.

The pacing of this worked well for me, from the prologue of a bound woman being force fed a strange octopus type creature, to the set up of the friends finding themselves in peril. It flowed naturally and the narration kept it all engaging, like when the narrator makes a comment about what is going to happen, such as stating that one of the women is her heroine, and who later on in the film does indeed become the primary protagonist. I have to add here that I usually get characters names from IMDB or the end credits of whichever film I'm watching, but here the actors roles are unnamed, which is why I'm not referring to any character by their given name! One issue I did have is that the camera work felt like it was done by a drunk man, it is obsessed with swaying around constantly. It gives it a fly on the wall feeling, but watching this hungover (as I indeed am today!) did make me feel a little nauseous. The soundtrack on the other hand was fantastic, a constant thumping beat that married perfectly with the onscreen antics, the whole finale was made whole by this music that worked so well with the visuals. With so much unexplained, and with the strange interactions Abduction 101 had the feel of a dream, a purposeful decision, yet like Close Calls it works for making this feel more like an experience. 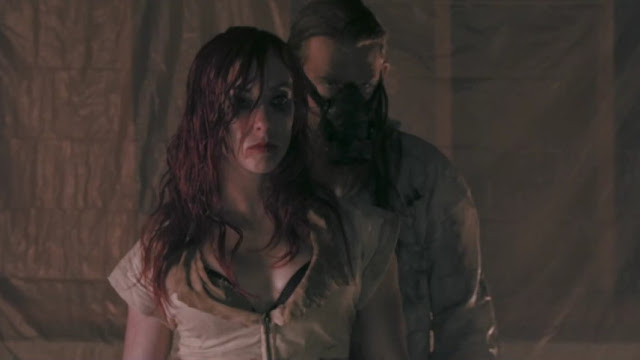 The idea for the story reminded me of Invasion of the Body Snatchers due to the antagonists being emotionless drones that seem to be under the command of an unseen master. This led to a very thrilling finale that had lots of tense and bloodlessly violent fight scenes. Special mention goes to the female drone (played by Kayla Kilby), she had such an expression devoid of any sort of humanity, loved it. Now this does almost fall into female exploitation at times, the core concept is females tied up in various ways, while even when they are free they choose to wear bikinis and tight fitting trousers that the camera never seemed to get tired of focussing on. Then there is the prolonged award nominated nudity scene that had context to it, but was the one scene of the movie that just seemed to be over long for no real reason.

Abduction 101 was an indie horror that I enjoyed far more than I expected to. The short length (seventy five minutes) meant that the story flowed quickly with no real excess (aside from the lengthy nudity scene), and the feeling of really being inside a dream gave this a strange charm. For all its dwelling on the female form it did in fact give a headstrong female protagonist, and in terms of the story I liked where it went. Better than the bland title would suggest. Check out the official trailer for Abduction 101 below.