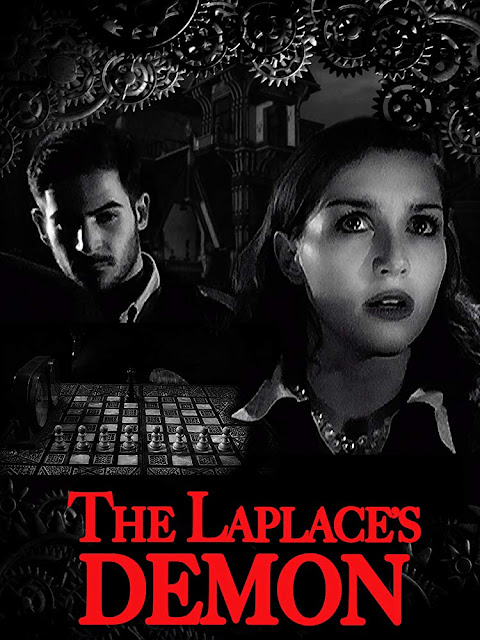 This is a painful post to write, I had written the entire review over the course of an hour, and then accidentally deleted it and was unable to get it back. I am going to try and write this as best I can from memory! From Wikipedia - "Laplace's demon was the first published articulation of casual or scientific determinism...According to determinism, if someone (the demon) knows the precise location and momentum of every atom in the universe, their past and future values for any given time are entailed; they can be calculated from the laws of classical mechanics". Once, when I was very wasted I came up with a similar theory, though much more crude. I theorised that the world was a giant clockwork piece, that people in it were cogs following predefined paths, and that there could be a way to accurately predict the movements and actions of any single person by a calculation. Discovering this was actually a well known (though mostly disproved) theory I found the idea of this in this film to be very interesting.

A group of researchers that had came up with a model that could accurately predict how many pieces a glass would break into when smashed have been invited to a remote island home of a mysterious professor. They assume they have been called there to discuss their findings, yet upon arriving they find out they are actually unwilling participants in his own experiment. He has come to believe he has perfected the Laplace's demon theory, and is out to prove it. The group find a miniature of the house, and see that white pawn pieces representing them are in this miniature. Where ever they walk the pieces perfectly replicate their movements via pre set clockwork movements, it seems that their futures have been perfectly predicted. More unsettling is the arrival of a black Queen in the miniature, a piece that represents a deadly threat in the real mansion, that knows exactly where to be at what time to vanish away the guests one by one... 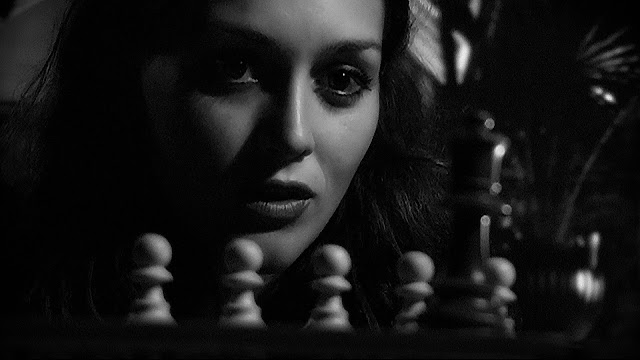 The Laplace's Demon feels like it stepped out of time, it has of it a feeling of the films of the early twentieth century, like a film from the 1950's say. This feel is represented in may aspects of this. It is filmed in black and white, the vast majority takes place in a single room. There are exaggerated performances by the cast (such as the wild eyed ship's captain who accompanies the group), and much of the film itself unfolds by conversations among the group, with action kept at a minimum. This is Italian, but had some decent subtitles meaning even with all the talking it is clear to tell what is going on.

The very idea of the fim is what appealed the most to me. The whole predestination aspect was well realised. The biggest ways this idea is shown is by the miniature, and by a pre recorded videotape that is found. The tape is of the professor who is able to hold conversations with the group as he seems to talk in real time to them, no matter how much they rewind or fast forward the tape he is perfectly in synch to not only answer the questions they pose, but also to know who is talking, and what they are doing as they talk. The miniature itself is a highlight of the film, much of the action is represented by the various chess pieces moving around. This brought to mind [Cargo] whose dynamic camera work detailed events occurring in a different place. Here it is the clockwork device that is displaying that aspect. Watching two pawns moving around a corridor to then come under pursuit by the ominous Queen is strangely suspenseful and exciting, knowing that it represents two characters who have left the room. The way this is edited with the real goings on was quite cool. Hearing the heavy thumps in the real mansion correspond with the Queen walking down stairs in the model one, seeing a pawn race towards a locked door, to then switch to the real door being banged on added so much to this. It was so effective that the fact that most of this takes place in a single room was forgotten. 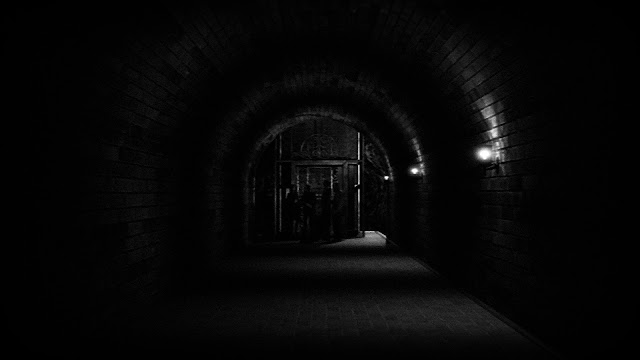 Some plot points can't be gone into, but the contrast with the Queen, and the real life threat was something I really loved. How the film slowly shows you more and more detail into just who or what is spiriting the characters away was lovely. The special effects in general were great, especially the clockwork of the model that the black and white really helped with. Everything here was great, I guess a small complaint would be that the characters are never really that well developed, you get a feel for the temperament of the individual characters, but there isn't really any fleshing out of the sort of people they really are.

The Laplace's Demon was a wonderfully unique film to watch. The sensibilities of an old fashioned horror, yet without the boredom that those sometimes bring. This was a suspenseful watch that had me enraptured throughout the one hour forty minutes run  time. Much like the Final Destination films, seeing people try and escape their predetermined fates was addictive, I liked how clever this became at accounting for every action, something that gave this a chilling feel at times. This was a grand blend of great direction, editing, story, and special effects by Giordano Giulivi, and performances that were so well suited to the style gone for. The Laplace's Demon is due out on iTunes, Prime Video, and other On Demand services on 22nd February in the US and Canada thanks to the Together Magic Film Group.