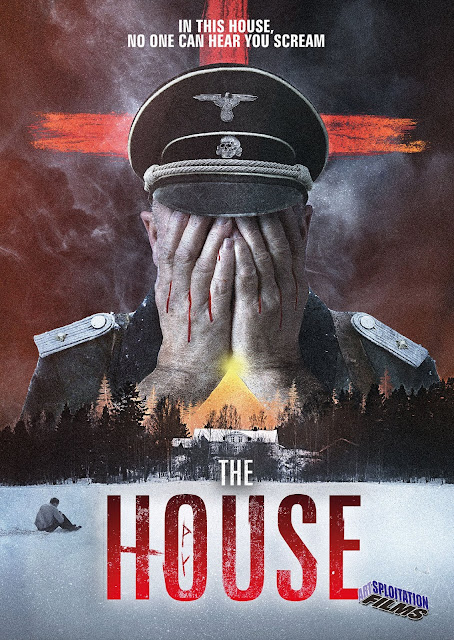 The House (Huset in its original title) is a Norwegian film that was written and directed by Reinert Kiil (Christmas Blood). Unlike his festive themed one this movie is played straight and serious with the situation throughout being very bleak. This had some great stuff going for it, but occasionally it felt a little too obtuse.

It is World War II and two Nazi soldiers, along with their Norwegian prisoner are lost in the woods of Norway. Unable to find their way to their rendezvous point, and with the temperature rapidly dropping as night comes, on the two decide to take refuge in a house they spot in a clearing. It soon becomes apparent that there is something very wrong with the house, and that it has no intention of letting them leave... 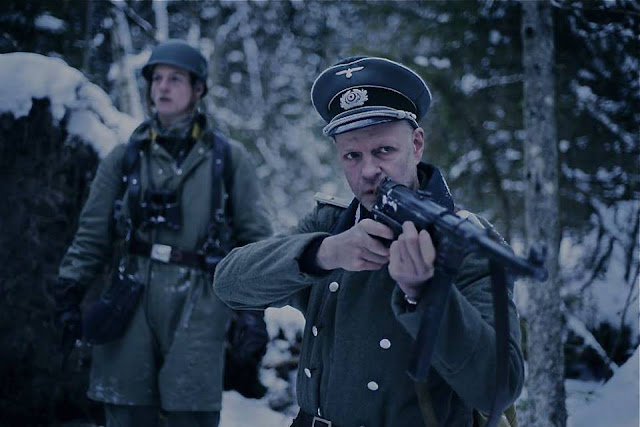 I have to say when I saw this was a horror film featuring both Nazis and snow I immediately expected a zombie type film like Dead Snow. Instead this is more of a paranormal horror that mixes elements of demonic possession, as well as more ghostly goings on. I found the possession angle interesting in how it was displayed on screen as flashbacks that allude to this having happened at some point in the houses past. Nothing in this movie is explained and I think that works in its favour. I have my thoughts on what this was about. The House is a slow burn of a film that at times feels more like a character piece drama than a traditional horror. Mainly this focuses on the trio of the soldiers and their prisoner. Kreiner (Mats Reinhardt) is the commanding officer and is more jaded in a way, though no less loyal to his country. Andreas (Frederik von Luttichau) is a naive young idealist who has taken Nazi propaganda to heart. Rune (Sondre Krogtoft Larsen - Christmas Blood) has less to him, he has few lines, and remains a mystery throughout, with clues pointing as to his real purpose in terms of story.

Rather than the build up of supernatural terror you instead get what I would class as low level events throughout. Doors slamming, objects moving of their own record, sighted apparitions, these are about as eventful as The House gets, yet they are persistent giving the house a feeling of dull horror to the people who find themselves trapped there. From around the halfway mark things start to get a little Groundhog Day-ish with the appearance of time loops and events repeating themselves. I loved this aspect and it leads to some clever moments. There are some callbacks to previous scenes that really start to make a bit more sense once future knowledge has been acquired. 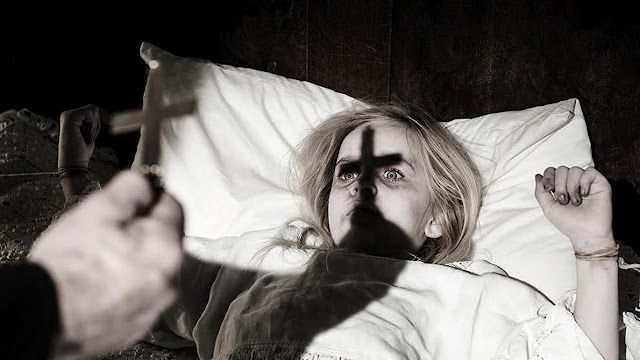 Much like Christmas Blood the level of directing here is strong, the quality of the camera is also strong here. The house has a quiet sense of unease to its look, from the crucifixes chalked on the walls, to the radio that keeps randomly playing, and the iconic bedroom cupboard that plays a large role in the events here. I found the two Nazi characters to be quite interesting, Andreas felt more typical, but I loved the meltdown he has over the course of the hour and a half run time, constantly looking terrified and covered in sweat. Reinhardt was the stand out actor for me, he came across as a soldier, not as a cartoon villain, or as a well rounded good guy. The characters all have their personal demons from their past that they confront. At times the film almost seemed a little too dark, but while that was a problem in Christmas Blood here it instead adds to the atmosphere. This is plenty atmospheric, though I wouldn't say scary, at times the over the top sound cues used to indicate something spooky has occurred were actually detrimental. This works best when you get the unannounced shadowy figure just lurking in the background of a scene. It works less well when you have a big orchestral screech when a book moves of its own accord. I can see the horror happening, I don't need a huge neon arrow pointing to the horror!

In terms of the story The House didn't really go anywhere too original, it shared a lot in common with a variety of movies such as Dark Corners and Jacob's Ladder. I thought the World War II setting was a good touch, and liked how characters spoke German, Norwegian and English depending on the situation,  and the performances of all the cast worked very well. Dark, moody and atmospheric, yet never really gets going enough to be truly scary. The House will be available on 5th March on DVD and Digital HD (including iTunes, Amazon Instant Video, Google Play, Vudu and more) thanks to Artsploitation Films.

Posted by Daniel Simmonds at 09:04