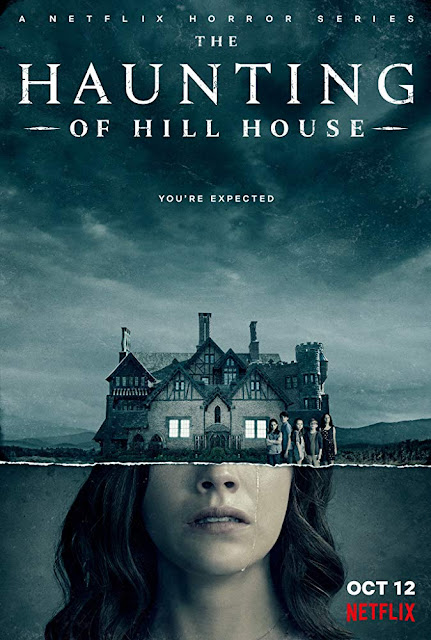 I get so bogged down with the films and other items I get sent to review for various people that I often neglect horror media that I would like to see if I got the chance. I had heard great things about The Haunting of Hill House and so after getting a recommendation about it from a friend I thought it was time I got around to watching it. Due to having a week off work for my birthday I finally had some free time, and so earlier this week spent four hours binge watching the final four episodes I had yet to see. Needless to say this Netflix show is damn well fantastic viewing. It is directed by Mike Flanagan (Hush, Gerald's Game) and so features a lot of the actors who have previously appeared in his films.

The show takes place in roughly two separate time periods. The first is in the past and it chronicles the events that happened to the Crain family who move into the titular Hill House in order to renovate it to then sell for a profit. The family are father Hugh (Henry Thomas - Ouija: Origin of Evil), mother Olivia (Carla Gugino - Gerald's Game), then their children -  Stephen, Shirley (Lulu Wilson - Annabelle: Creation), Theo (Amityville: The Awakening), and twins Luke, and Nell. Over the period of months they are there they encounter all sorts of unsettling events that eventually culminates in 'the final night before they flee in terror.
The second half of the show takes place in present day with the children now fully grown adults. It explores how their experiences from the house has affected their lives, and how the events continue to haunt them. Stephen (Michiel Huisman - Game of Thrones) has become a best selling author based on his fictionalised account. Shirley (Elizabeth Reaser - The Twilight Saga) now runs a funeral home, Theo (Kate Siegel - Hush) a psychic care worker, while Luke is a recovering heroin addict, and Nell is in deep mourning. 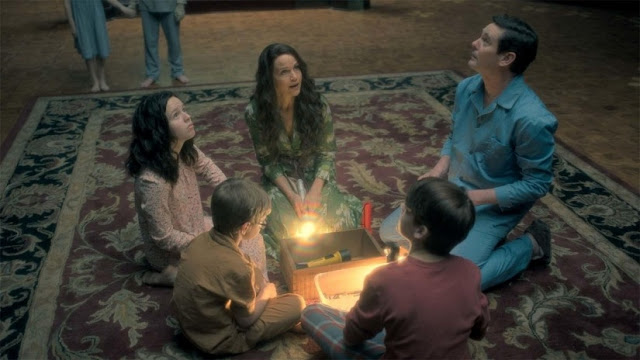 This show leaps backwards and forwards so much in time that it is like a complex puzzle, whose pieces unlock as the show moves along. There are seemingly throwaway moments that occur that then much later on are shown to have huge significance. People say things that later on mean so much more, or which suddenly give meaning to earlier scenes or episodes. This show is so clever in how it is laid out that there are even a bleed over effect whereby events in the future directly influence events in the past. It is a crazy, mind melting way of setting things out and it works beautifully. Some of the most impactful moments come from these sadistic reveals that utterly change your perception of what has occured in quite a chilling manner.

This is ten episodes with each one being roughly an hour long. There is a lot of thought put into these episodes with them usually revolving around a different character. By the end each of the family members have gotten at least one episode that revolves around them, both in the past and the present. The idea of interlinking story lines has been done before, Arrested Development for instance springs to mind, it is such an interesting way of showing things. Due to how the story is told you end up identifying and feeling what characters do in their own episodes, yet seeing things from a different characters perspective in later episodes makes for some sublime storytelling. Occasionally whole entire scenes repeat, while key scenes for one character can then play out in the background of another characters story. 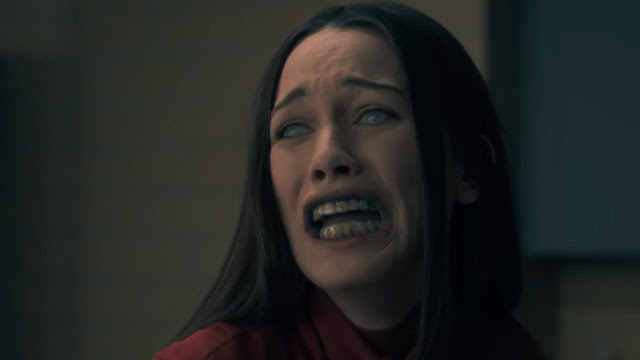 The best episode in terms of pure craftsmanship is episode 6: Two Storms. Without going into the context of the actual story this whole hour long masterpiece is made to look like it is taken in one seamless take. It wasn't, but even split into five single takes this is amazing to watch. The longest single take being about 17 minutes. Thats 17 minutes that the same camera is filming, there is the one single shot throughout, even going as far as to have the past and present stages connected to each other so that the story can seamlessly travel back in time. This really was stunning from a technical and performance perspective, my only complaint for this was I so marveled at the construction of this that I didn't pay as much attention to the actual story going on. I kept imagining all the actors running around off camera trying to get onto their marks in time. The way the past and present storylines play out in tandem combine to give a horrific finish that was perhaps the second most haunting thing in the whole show.

The Haunting of Hill House is also thankfully legitimately scary. There is persistent threat and unease with zombie like ghosts often popping up when you least expect it, but not jump scares, that would be lazy. These ghosts are integral to the plot and never failed to chill, showing up both in the past and present segments. There are even ghost 'Easter eggs' hidden in all the episodes with figures hanging around in the background without the camera pointing them out. I may have missed pretty much all of these, but it would have creeped me the heck out even more if I had noticed them, the ones I did see I just figured was my mind playing tricks on me! The mystery is what kept me glued to the screen, there are so many questions about what has happened, such as what is in the red room? what did Thea see in a particular cliff hanger ending? and the biggest one - just what happened the fateful final night in Hill House? By what characters say and do, and their unique flashbacks these answers are all ever so slowly revealed. Occasionally the not knowing was frustrating (very mildly) but by the time the last episode has ended every single question has been answered, I can only see a second season of this happening if they American Horror Story it and have a totally new concept. 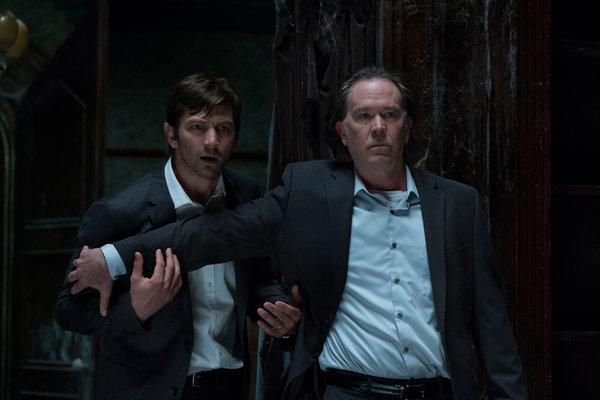 I had heard The Haunting of Hill House was good, boy was that an understatement. The acting is routinely astonishing, some stunning acting here, though it is often done in an introverted way - that of two characters having really deep conversations among themselves rather than groups talking. I loved how earnest and well spoken these individual conversations often got though, it made you feel like a spectator of something really private. The music, special effects, set design, make-up, cinematography - pretty much anything you can think of is just so amazing here. I find myself trying to convince my non-horror watching friends to check this out, it deserves to be wildly watched. This is the first time in a long time a show has really knocked me off my feet, and so I can't recommend it enough if you have yet to see it.

Posted by Daniel Simmonds at 06:48