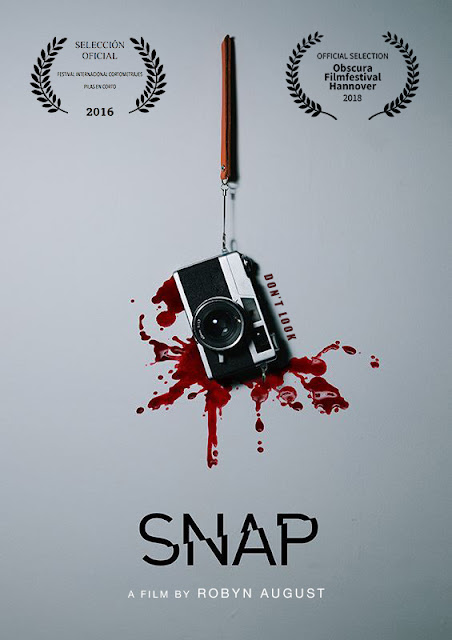 Snap is a short horror film that clocks in at just over two minutes in length. It stars Robyn August who also wrote, edited, and directed this. While this was very similar in style to quite a few other short horrors I have seen over the years there were elements that I particularly enjoyed.

A man (August) discovers a vintage camera in his closet and decides to test it out. He is troubled when he notices the figure of a woman appearing through the lens, yet without the camera this person is nowhere to be seen. Spooked by this he investigates further...

The whole 'only able to see a spirit through a camera' has been done to death over the years, usually it centres on the camera screen of a mobile phone. Using an actual camera weirdly felt a bit fresh, while I couldn't help but be reminded of the Camera Obscura from the Fatal Frame/Project Zero survival horror video game series which can kill ghosts via taking pictures of them. I liked that the spirit is still able to move around when being watched, it's a small thing but all too often a stationary figure will appear, which is fine, but everyone seems to use that idea.

The directing, editing and the special effects were the best thing about this. The fast paced editing towards the end, the choice of camera angles, and one effect in particular worked so well together, the best part of this. How the rising tension of the music cuts out at exactly the perfect point was great, the whole final thirty seconds of this are just excellent. The lead up to this was good, there were some visual story parts that I couldn't see the relevance of, nor make sense of them in my mind, yet overall I thought that despite a lack of too much originality with the actual story told, Snap was a very well made horror short.