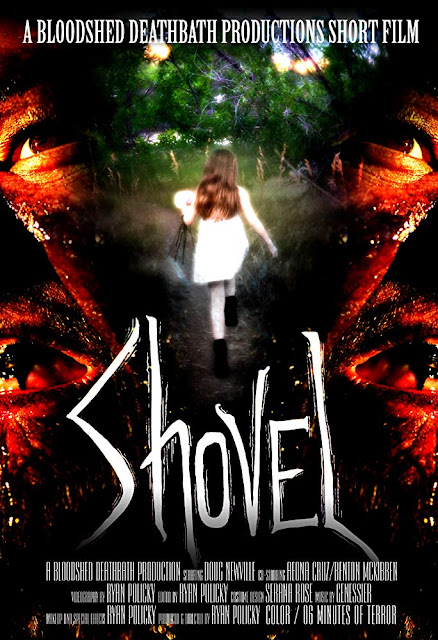 Well, it has been a while since I saw something as immediately weird as Ryan Policky's short horror film Shovel. When I was much younger I used to watch this show called Headf*ck on the Sci-fi Channel, it was made up of a collection of messed up short films and music videos. This short would feel right at home on that I feel.

A young girl (Aeona Cruz) walks around a field collecting flowers. Meanwhile in an unrelated scene a hulking man (Doug Newville who also wrote this) armed with a shovel goes on an indiscriminate killing spree. Eventually these two story lines meet up to form an unexpected resolution.

With barely any dialogue to speak of and an abrasive track by horror industrial group Genessier this six minute short felt almost like a music video. The music is a constant drone that gave the feeling of being deep into a nightmare. Talking of drones there are some nice shots from the sky, the camera work and editing really help build up an oppressive atmosphere, such as the choppy close up shots of the killer. The overhead shots give a sense of scale that create the feel that all of Shovel takes place in someone's bad dream.

Shovel works because of the great blend of the music and visuals, both are essential in creating this bizarre dreamscape that was an experience to watch, and with the unique style it was going for this this was an addictive watch as well. Shovel is now available to watch on Amazon Prime.

Posted by Daniel Simmonds at 11:37