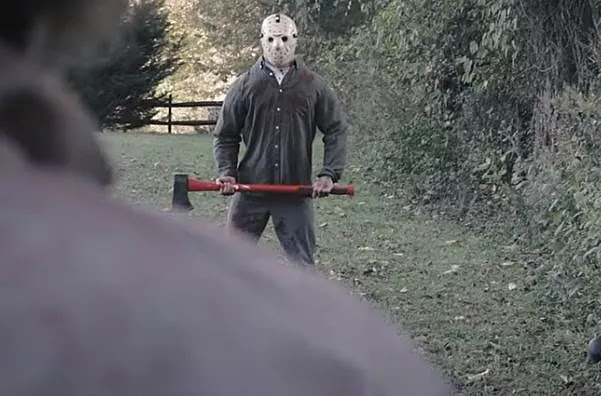 It was around this time last year that the three part fan fiction slasher film Michael Myers Versus Jason Vorhees was released via Dark Red (responsible for septeMber, one of my favourite short horrors I've ever seen). To celebrate the anniversary the three parter has been re-edited into a single film with new scenes and music added to help it flow better.

It is business as usual for killers Michael Myers (Jeff Payne) and Jason Vorhees (Dustin Miller). For reasons unknown they happen to be in the same remote area, after inadvertently stealing each others kills they start up a titanic battle lasting days. With these two seemingly indestructible killers battling who will come out on top?

Having seen this in its original form I felt it was fine enough, but it didn't really appeal to me. That is despite Halloween being one of my favourite horror franchises (I have seen all the Friday 13th films but they are near universally terrible). Having this now as one single 33 minute film I found myself enjoying this a whole lot more. I realised watching this though that having two silent and unkillable leads doesn't make for a plot that is that exciting. I see now that Freddy vs Jason worked well because of the differences between the two killers. Even with the re-editing at times this short threatened to get a little bit dull.

It is hard to deny that this doesn't look and sound great though, the iconic music really adds a lot to this, and the editing is fantastic. I like the quality of the footage also with some nice drone shots, and plenty of blood being splashed around. The two killers look the part, obviously lower quality than the real things but they are still iconic in their looks. The main draw is seeing which one comes out on top and it was nice to see there appeared to be a real resolution. Check it out for yourself below.

Posted by Daniel Simmonds at 08:19