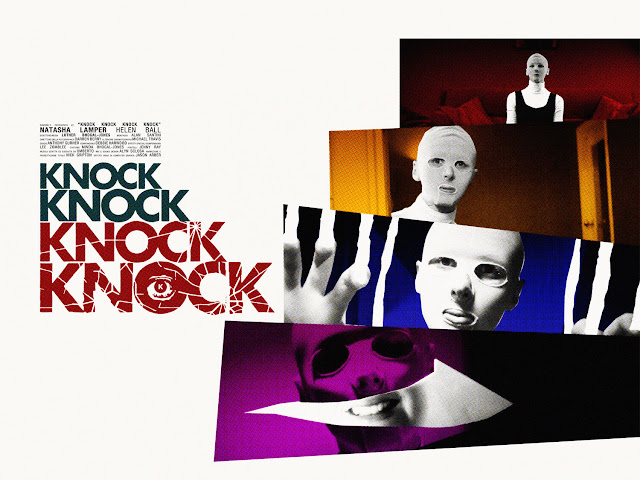 Knock Knock Knock Knock is the second film in the Sincerely, Psychopath: Disposable Screams series (despite not being the second one to be made in that series). The first was 2012's Creak, and both were directed and written by Luther Bhogal-Jones. This one goes very deep into arthouse territory, thankfully this works out well for this.

Natasha Lamper stars as Freya, a woman who has recently had a nervous breakdown which resulted in extensive self harm. She has been left home alone in her flat and advised to take her medication. She hasn't long been there however when she starts to hear an urgent knocking at her door. With no one there when ever she opens the door she decides to resort to desperate measures to catch the prankster. Is there really someone there, or is this a lingering effect of her recent breakdown?

I wasn't sure exactly what to expect from this but I was looking forward to finding out. Something as simple as a simple unexplained knocking at a door can make for some engaging viewing. Knock Knock Knock Knock is fantastic, if you had shown this to me and said it was from the eighties aside from the crisp, clean image, and modern special effects used in places I would have seen no reason not to believe you. This is a homage to the Italian horror/giallo films of that time and it is a masterful homage. Everything about this just felt ripped straight from that, from the title cards (a great kinetic film title it has to be said), the freeze frame ending shot, and the wonderful score by Umberto.

The arthouse use is varied with a whole slew of the type of tropes used for that style of film making, such as sped up and slowed down moments, scenes morphing (from laying on the floor to laying on grass), use of different primary light colours. This even devolves into pure animation at one point. There are some lovely shots here that give you an insight into the mind of the protagonist that is as fractured as the mirror that breaks during this. As the press release itself admits "Admittedly a wafer thing plot...this premise is the jumping off point for a succession of visually arresting moments". These visually arresting moments were varied and kept me glued to the screen to see what would come next, helped along by some nice cinematography.

Knock Knock Knock Knock was a great ten minute short, a hypnotic whirlpool of madness that was a blast to witness. The short has a novel way of release in that it is only available to those who request it. Anyone is free to see it but to do so you must email Faster Productions to be given a link to download the film. If you are interested then send an email to fasterproductions@yahoo.co.uk with the subject line 4KANDLES.