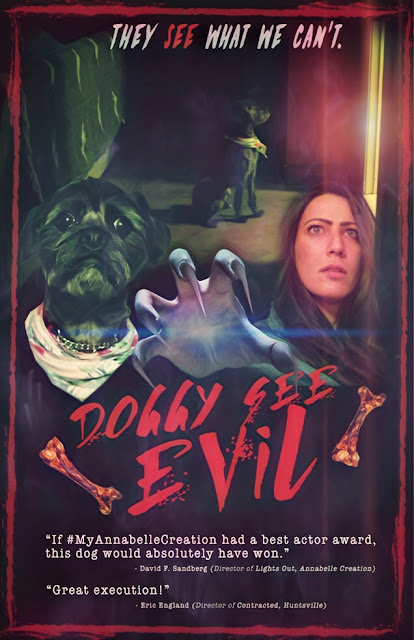 Doggy See Evil is an award winning short horror film from Robyn August (Snap) that was created for the Annabelle Creations 2017 competition. It also won Best Micro Short at Hollywood Horrorfest 2018. In terms of the story it is mostly similar to the previous one I have seen of the directors. With short films, especially ones which come in at under two minutes like this one there isn't really far you can go outside of a sudden shock ending.

It is late at night where a woman's dog seems to be afraid of something in the bathroom. She tries to reassure the dog but it wont move, so she goes in to have a look just to make sure there really is nothing in there...

The best part about Doggy See Evil was the dog itself, I loved the expression on its face throughout. It added a lot to this The actress is fine as well. The actual plot of what happens is nothing special, I would say it is traditional in terms of horror shorts. The payoff is executed well with a nice special effect, while the music adds to the atmosphere well.

While this short was predictable, the addition of an animal made it stand out, it really helped that this dog really did seem to be playing its part well! While the effects were minimal they worked well, adding a bit of sheen to this.

Posted by Daniel Simmonds at 04:02